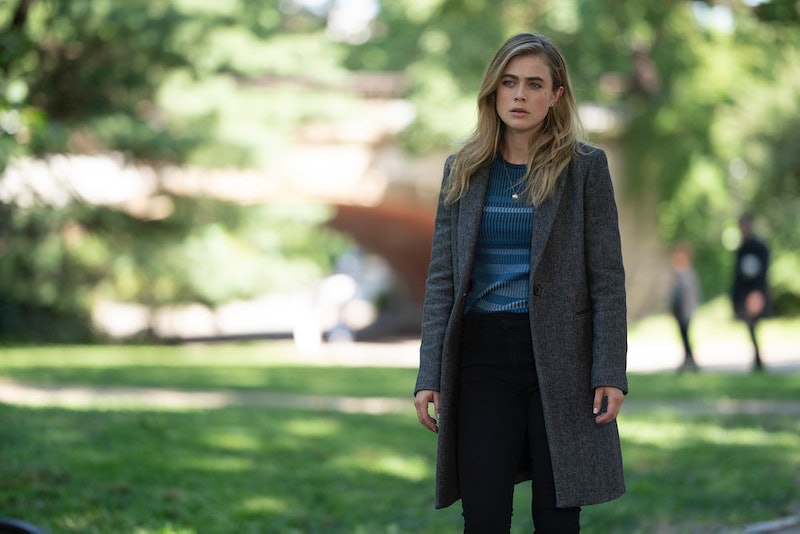 Manifest's return for Season 2 doesn't necessarily change the doomed fate of the characters. At the end of Season 1, fans learned that there seems to be a "death date" for the Manifest passengers of Flight 828. Evidence has stacked up to suggest that everyone who survived the plane's disappearance and re-appearance five and a half years later will then die for real... exactly five and a half years after returning.

This theory presented itself to Ben and Michaela Stone after non-passenger Griffin died in Season 1. During an electrical storm, Griffin accidentally drove a stolen van into the river. He should have drowned, but, when the van was pulled out of the water four days later, he was still alive. Whatever miracle happened to the Flight 828 passengers appeared to have also happened to Griffin. But then, four days after he was miraculously found alive, he died... by drowning on dry land. His fate seemed to have caught up with him. If Griffin was a cautionary tale for the plane passengers, that would mean they only have until June 2, 2024 before their own fate catches up with them.

Further backing this theory up is that Cal Stone, known for his premonitions, drew a picture of gravestones with his, Ben, and Michaela's names on them along with that June death date.

That's what the second season is all about — the impending sense of doom over the passengers' heads and the race against the clock to see if this fate can be avoided. "The first season was about survival; this one’s all about preservation for these guys," Josh Dallas, who plays Ben Stone, told Entertainment Weekly. "You see all the characters trying to figure out how to keep the things that they love and hold dear close to them. The death date is this looming shadow over them that is causing this need to protect the things that they love."

In an interview with TV Insider, Dallas added, "Ben is a very practical kind of guy, so he's going to make plans for [the death date], but he's not going to fully accept it's coming. It pushes him onto this journey of finding a way to stop it with [fellow passenger] Saanvi."

In another interview with Parade, Dallas added that trying to stop the death date eventually wears on Ben. "He puts a lot of self-inflicted burden on himself to not only be responsible for his family, but for all the passengers, and that burden is going to be very heavy for him as we go through Season 2," the actor said.

As usual, Ben's sister Michaela has a different idea about things. While Ben and Saanvi are working to stop the death date, Michaela just wants to do good with the little time she has left. "For Michaela, it's more so just about helping people within the time frame that they have and encouraging her brother to do the same thing," actor Melissa Roxburgh, who plays Michaela, added in the aforementioned TV Insider interview.

If the death date marks when their lives catch up to them — as it did with Griffin drowning on dry land — it begs the question of how the passengers will die in a plane crash if they're not on a plane. Will they all suddenly just fall to the ground? One of the Season 2 trailers shows Ben, Michaela, and Saanvi all having a vision about a plane filled with bodies and ash, so things are definitely not looking up for them.

However, Reddit user Memester1279 theorized that the only reason Griffin died when his time caught up is because he would have died if he was actually underwater. Perhaps when the clock strikes June 2, 2024, the Flight 828 passengers will just rapidly age to catch up with where they would have been if time had passed for them properly. This rapid aging process would likely mean that Cal would die — as his cancer likely wouldn't have been cured in time. But for Ben and Michaela and many of the younger, healthier others on the flight, maybe the worst that will happen is that they'll deal with rapidly onset aging.

Of course, that may be wishful thinking for this series. According to Collider, the creator has a six-year plan for the series, and it initially premiered in 2018. Those six years would take the show right into 2024, where the creator seems to want to end things. That suggests that death really is looming and that the show is not as much about living past the death date as it is about the journey everyone takes on the way there. Of course, the 2024 timeline doesn't guarantee that any of your favorite characters will even make it that far. It seems that 2024 is just the longest they can live — as some passengers have already died throughout the course of Season 1.

And if you're a fan of newbie Zeke, get prepared to say goodbye, possibly even in this season. Zeke wasn't on the plane, but did have a similar near death experience in December 2017 that transported him a year into the future to 2018 when the show's timeline is currently taking place. That means come winter 2019 on the show, his death date may be tolling — unless Ben and Saanvi can come up with a solution in the literal nick of time.

More like this
Ozzie’s Coming Out Scene With Kitty On 'That ’90s Show' Has Twitter Sobbing
By Brad Witter
Everything To Know About A Potential 'Lockwood & Co.' Season 2
By Gretchen Smail
Shonda Rhimes Responded To The Surprise Exit Of A Day 1 'Grey's Anatomy' Figure
By Grace Wehniainen
This 'Gossip Girl' Wardrobe Error Has Gone Viral On TikTok
By Alyssa Lapid
Get Even More From Bustle — Sign Up For The Newsletter
From hair trends to relationship advice, our daily newsletter has everything you need to sound like a person who’s on TikTok, even if you aren’t.