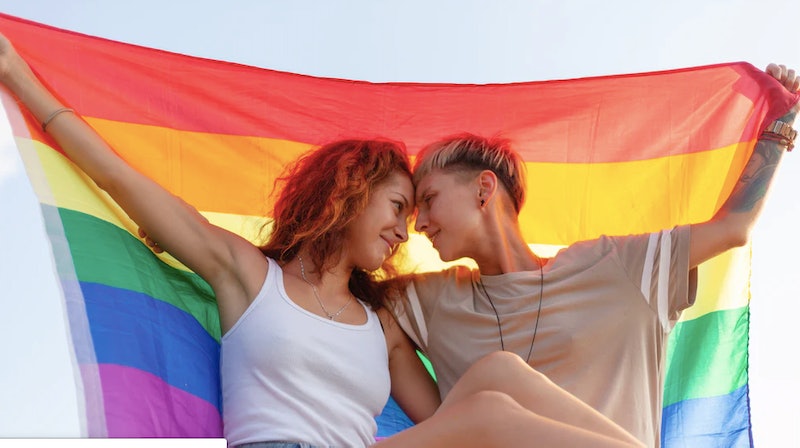 Attempting to represent an entire community who have different lived experiences with one acronym or label is extremely difficult. Being part of the LGBTQIA+ community doesn’t mean that everyone who identifies as non-straight gets access to the same support or faces the same discrimination. While some people find labels empowering others think they are a way to separate, ‘other’, and oppress LGBTQIA+ people. So, what does the plus in LGBTQIA+ refer to? With a plethora of acronyms and multiple meanings behind that little plus sign, it can be difficult to know what it all means.

Standing for lesbian, gay, bisexual, transgender, questioning/queer, intersex, and agender/asexual/ally, LGBTQIA+ is seen as an inclusive and accepting way to refer to the queer community and those people who don’t identify as heterosexual or cisgender. The plus is widely taken as a symbol to represent self-identifying members of the community who are not included in the LGBTQIA acronym

Creating an inclusive acronym is important, but here's no denying that no matter how many positive steps forward have been taken in the UK and US, the experience of LGBTQIA+ and straight people is still different and many people within the community still face stereotypes, prejudice, and discrimination due to their sexuality.

A representative from the Gay and Lesbian Alliance Against Defamation (GLAAD) told Pink News, “coverage of LGBTQ issues has moved beyond simplistic political dichotomies and toward more fully [realized] representations, not only of the diversity of the LGBTQ community, but also of LGBTQ people’s lives, their families, and their fundamental inclusion in the fabric of society.”

While some see the plus in LGBTQIA+ as a major signifier of inclusivity and acceptance, others see it as having a much deeper meaning. In 2017 of the 4,363 people diagnosed with HIV in the UK, 53 percent were gay or bisexual men. The LGBTQIA+ community was hit hard by the HIV epidemic in the 1980s and 1990s and stigma means that the community is still vulnerable in the present day. Some see the plus at the end of LGBTQIA+ to signify support and acceptance of those who live with HIV.

The plus in LGBTQIA+ not only represents other sexual labels and identifiers, but also the experiences of those within the community. Charities have found that homophobia continues to be a major barrier for people trying to get access to HIV services and education. A recent study published by the BBC by The Lancet found that, through taking an anti-HIV drug, it was found that 1,000 male couples had no cases of transmission over an eight year period. So the importance of access to medication is clear.

Discussing the research in an interview with the BBC, the chief executive of the National AIDs Trust, Deborah Gold said, "there needs to be a much better understanding of how HIV is and isn't transmitted, and the fact that treatment stops transmission, in the NHS and beyond. We think this is vital to addressing stigma."

The development of antiretroviral therapy to treat HIV is a massive step forward. The Terrence Higgins Trust reported that 98 percent of people diagnosed with HIV in the UK are receiving treatment and 97 percent of those have an undetectable level of the virus, which means they are unable to pass on the infection.

While the plus in LGBTQIA+ may represent other sexual identities such as pansexual, gender fluid, queer, bi-curious, and so many more, it's also a wider signifier of inclusion and acceptance for all experiences. And the progress that is being made within the LGBTQIA+ community.