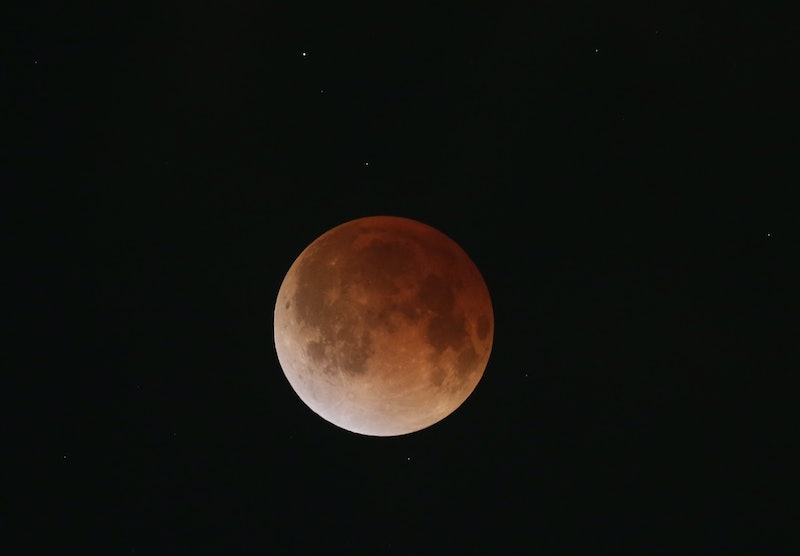 If you're a little bit witchy or a lot a bit into celestial events, you should definitely know what the strawberry moon of 2017 means, because it's a pretty lovely astrological event. The pinkish moon is June's full moon, and if you there's anything you know about June from looking at any calendar, it's that people love to get married in June. So one romantic might ask: which came first, the June pink strawberry moon, or the slew of nuptials? It's easy to think there's a connection between the two.

But while the strawberry moon might appear a tad pink to us, that's actually not how it got its name. The Algonquin tribes that dubbed the June full moon the strawberry moon, actually just did it as a reminder to pick their strawberries. (A pretty epic reminder service in the days of pre-iCal, don't you think?) You see, strawberries are most ripe in the month of June, so when the strawberry moon rose, the tribes would go out and collect their ripened harvest before the animals got to them. And, because where we're situated geographically, the moon appears very high in the sky for us, which gives it a pinkish tint — merely an illusion, of course.

But in other parts of the world, where strawberries are not native, like Europe, the moon is called the rose moon, or the honey moon. This only fuels more thought into the concept of which came first, the pink honey moon of June or the increased interest of weddings in June.

According The Farmer's Almanac, the best time to catch the June full moon is actually in the morning. On June 9, at 9:11 a.m. ET, we here on the northern hemisphere will have the best view of the strawberry moon. And luckily, we won't need any fancy viewing devices to see it — all we have to do is look up and hope for a cloudless sky. (Though, if you do live in a crowded commercial city, light pollution might get in the way of your view, making the sky seem a bit hazy. The farther you get away from bright lights and the closer you get to a residential area or the suburbs, the easier it will be for you to see the moon with unencumbered views.) Though astronomers do note that while most full moons are known for their seemingly larger size, this particular full moon will appear smaller. Some astronomers are even calling it a minimoon. So cute!

Also according to The Farmer's Almanac, it's lucky to marry under the strawberry moon, so take of that what you will. It might be folklore, it might be superstition, or who knows, it might be actuate if you believe in it enough.