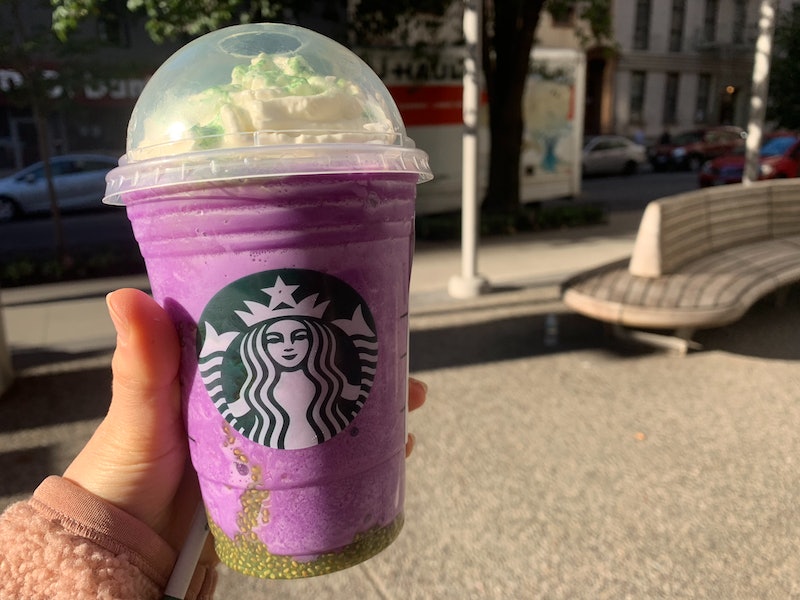 Fellow spooky caffeinated people, today is truly a day of days: Starbucks just dropped a new Witch's Brew Frappuccino for a limited time, in all its purply, greenish glory. But with a flavor described as "toad’s breath" mixed with "bat warts" and topped with "lizard scale powder," you might be wondering what the Witch's Brew Frappuccino at Starbucks tastes like, given that it sounds like Neville Longbottom panicked in first year potions and dumped everything into a cauldron with reckless abandon. Because of journalistic integrity and also a sweet tooth approximately the size of the moon, I went on a journey this morning to experience the new concoction for myself.

I would like everyone to know that the baristas were actively making bets over what time someone would order this when I arrived just after 9 a.m., because someone definitely won something from said bet when I walked in and asked for one. I would also like everyone to know that I just endured the stares of a dozen disbelieving commuters trying to make sense of what I was holding on my way back into the office. But it was all worth it and the some, because it turns out that "toad's breath" has an uncanny resemblance to ... an orange creamsicle?

Which, incidentally, is right on the money — according to Starbucks, the actual flavor is Swirl Orange Crème Frappuccino-flavored. Orange might seem like a bizarre flavor for a frapp — particularly a purple one — but with the crème involved, it actually works out, giving it an almost sherbet-y taste. As with most frapps, it is very, very sweet, but the sweetness is nicely cut with the chia seeds — er, "bat warts" — which provide a nice little crunch. (I am always a fan of frapp mix-ins you can chew.) The whipped cream on the top is a must, not just for the Insta opp but because it also tempers some of the sweetness. Plus, who knows what kind of havoc you'll wreak without the lizard powder (aka green sprinkles) measured into the brew?!

And, taste aside, it just looks bonkers as heck. Prayers up for my purple intestines, y'all.

If you're looking to experience this magic for yourself, you better hustle — the drink, which is available starting Oct. 25, is only around for a limited time. Though Starbucks didn't indicate an end date, it's probably safe to assume that it will be vanquished after Halloween, which means you have about a week to toss one of these back for breakfast every morning and live your best witchiest life.

Grab yourself one last PSL while you're at it, because the sun may be setting on that autumnal fave soon — Oct. 31 is historically when the PSL Twitter stops being active, and Nov. 1 is usually about when the winter holiday drinks start to take the stage. Of course, by then you'll have consumed enough Witch's Brew Frapps that you'll probably have accumulated enough magical powers to convince a barista to make you whatever you want, so you do you.