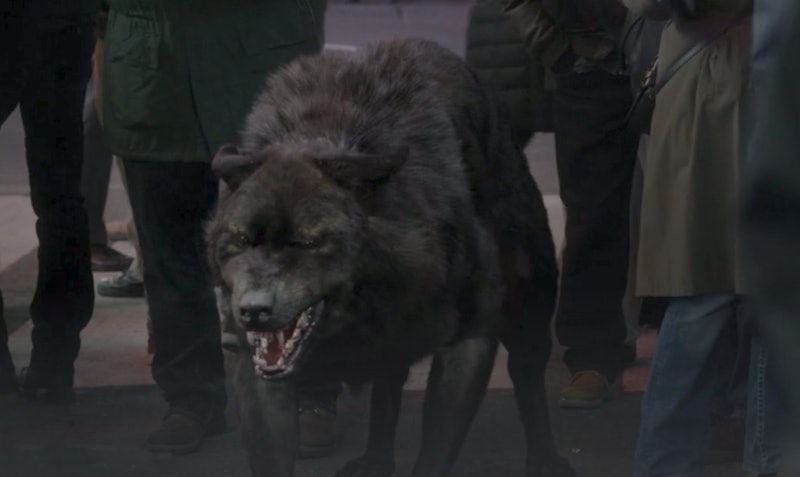 There's only one episode of Manifest left before the end of Season 1, and there are still so many questions to be answered. But one question that has persisted for not one, but two cliffhangers is what the wolf means on Manifest. The wolf calling was first seen by Zeke while he was at Michaela's apartment. Then Cal drew a wolf attacking Michaela. And now, she's seen the wolf in a crowd of people following the successful deactivation of a bomb in Times Square. There's a reason the wolf keeps showing up, and Manifest creator Jeff Rake explains why to Bustle.

"I think of the wolf symbolically as the idea of a predator who realizes that, when unexplained abilities arise, it becomes a pendulum that can swing in either direction," Rake says. He adds that some people use those abilities for the better, and others are "shamelessly prepared to use it for the worse."

One obvious example of the latter is Griffin, the truck driver who used his calling about the bomb in Times Square as a way to trade for his immunity in a double homicide. But it's important to note that there could be other wolves in sheep's clothing in this series. One possible example is Adrian, who started a church for people who believe that the Flight 828 passengers are some sort of second coming. Adrian could be considered someone else who is using the callings for personal gain rather than for good.

"Griffin is the more extreme measure where we see him ruthlessly harness the calling to, as Michaela says, get away with murder," Rake says. "Adrian, in a subversive and subtle yet arguably equally Machiavellian manner, has chosen to harness the callings in his own way to assume power over an increasingly numerous group of devoted followers."

But even though Adrian is gaining money and power from this new venture, Rake cautions viewers to not judge too early, saying, "He makes a compelling case where he says to Ben, 'Who’s to say that this isn’t our purpose?'" Rake adds, "I’m trying to create a spectrum that is complicated such that there are obvious wrongdoers like Griffin and then there are other principles in play — whether they’re protagonist or antagonist, I leave up to the viewer." Much like the vagueness of the callings about the wolf, not everything is so cut and dry with regards to how the passengers deal with their callings, either.

But Rake does want viewers to know that there are consequences for every action on this show — and Griffin may not have gotten away with as much as he thinks he did. "Those who choose to flaunt the callings, to abuse the callings may be in for a very unfortunate surprise when they discover that all acts have consequences and the other shoe is going to fall," Rake hints.

That could line up with one fan theory about how the show keeps referencing stars. Michaela and Zeke discovered a cave drawing of the constellation Gemini while on top of a mountain and also had callings about being surrounded by stars. Reddit user HomerJBouvier pointed out that there have been several other important constellations referenced as well throughout the show.

Mythology points to the constellation Centaurus, which is right next to Lupus and looks to be stabbing the wolf and sacrificing it to Ara — the altar constellation. Is Griffin going to be sacrificed in the Major's pursuit of her Holy Grail? This is just a theory, but Rake says he appreciates when fans pay attention to tiny details and formulate their own complicated ideas — so that's mine.

One of Reddit's is that Griffin is represented by the wolf, because he's a lone wolf now that he's killed his accomplices. And, apparently what goes around comes around for those who jump at the chance to use the callings for personal gain. So Griffin may not be a problem for Michaela for much longer. But since the wolf could potentially represent any number of people hiding out in sheep's clothing — the passengers should still be wary.