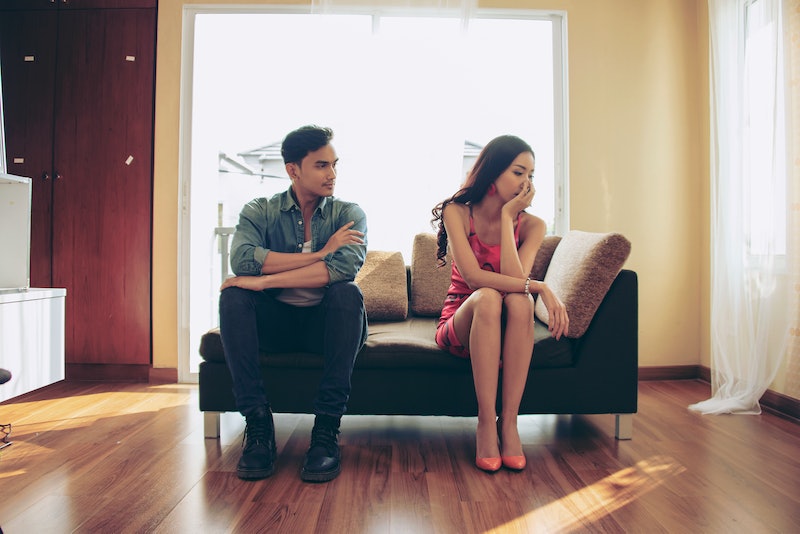 Toxic masculinity is a term used in reference to how our culture perpetuates a limited idea of what it means to "be a man." Masculinity is often associated with characteristics like being tough, unemotional, and aggressive, to name a few, but there are plenty of examples of toxic masculinity on the day to day that fly a little further under the radar, and are often more difficult to pick up on. But they are just as corrosive and damaging.

"There has been a good amount of attention to the pressures some men feel to express their masculinity in overtly harsh, violent, or 'toxic' ways," Ellen Friedrichs a health educator who works with teens and college students, and author of Good Sexual Citizenship, about dismantling hostile sexual climates, tells Bustle. "But what I think can be equally harmful is when people of any gender are 'benevolently' sexist. That can be a lot more subtle and as a result, a lot harder to tackle."

"There are a few problems here," Friedrichs says. "For one thing, men and women get boxed into rigid roles and trans and non-binary folks get erased. For another, this script punishes anyone who strays from a very narrow expectation of acceptable behavior, say sensitive men or outspoken women."

Friedrichs says that one study found that benevolent sexism makes women more likely to accept gender inequality, since more openly hostile sexism is a lot easier to point out. More subtle forms of sexism are also a lot more difficult to explain, and a lot more difficult to have people take seriously as being something that is detrimental. Another study found that women are actually more attracted to men who are benevolently sexist.

Overall, Friedrichs says, accepting a lot of premises about men's "innate nature" (be it that they are all dogs, or that they are violent, or can't handle commitment, are sex crazed, or any variation of these) harms everyone.

"It allows unacceptable behavior to continue and be seen as normal, and it causes people of all genders to constantly police themselves for signs of gender transgressions," Friedrichs says.

So any time, for example, you hear someone saying "it's a guy thing" or you witness men talking about sex or women in a way that seems competitive, or people assigning gendered language that erases a wide spectrum of identities and experiences, it deserves calling out and discussion. Even if someone is enacting a stereotype, it is also important to remember that it doesn't make it universally true, and it doesn't make it OK. It is just an example of how deeply entrenched these ideas are in our culture.

Jor-El Caraballo, a mental health professional and co-founder of Viva Wellness, a holistic wellness center located in Brooklyn, NY, who specializes in delivering sexual assault prevention education programs and working with LGBTQIA clients, tells Bustle that our idea of what is masculine or feminine is largely determined by culture and time. These ideas change over time and can vary by ethnic and racial group, region, and more.

"Masculinity in and of itself is not toxic, only the meaning that we attach to 'masculinity' has the ability to make it toxic," Caraballo says.

Other ways our limited understanding of masculinity — and to whom it gets attributed to — play out in everyday life, are that men feel shame when crying or expressing emotions. They instead suppress emotions because it's seen as "un-masculine" and have a difficult time expressing or identifying emotions with a partner, or they struggle to develop as a caretaker.

A lot of this begins at a really young age, Caraballo says, so we need to encourage all kids to value their emotional selves.

"Try not to lean in to gendered assumptions such as telling boys to 'shake it off' but letting girls cry when they are hurt or upset. Girls — or rather people socialized as such — are generally given many more opportunities to tap into their internal emotional lives and share feelings with others," Caraballo says.

These gender roles can be reinforced in all things like parental reactions to injury, Caraballo says, down to the type of play that we stereotypically allow for the sexes, like active play for boys, and creative or relationship-centered play for girls.

It's true that gender stereotypes and mental limitations are deeply ingrained in our society and in us — so just as much as it must be stood against in public, it has to be done in private. It's also an inside job to relieve ourselves of these ideas. It can be really easy to fall back on language, behaviors, and assumptions that have been around for a long time. Especially in groups of friends or family settings. And a lot of that work needs to be done by men themselves.

"Intentional self-growth and commitment to change is crucial for slowly changing learned behaviors," Caraballo says. "Many men don't have a nuanced understanding of what language to use even or how anger might feel differently than annoyance or frustration because of toxic masculinity. I spend a good amount of time educating men on these ideas and helping them figure out how to listen to their internal selves more so they can get their emotional needs met and they can be better partners."

Often, people have to slow down and explore themselves as men to truly understand what they're feeling and why, Caraballo says, adding that therapy can be a safe space to get productive feedback without judgment to help unlearn those toxic behaviors and thought patterns.

Caraballo says that some men find working with a male therapist can help them feel more comfortable in talking through those challenges, while learning how to embrace healthier messages and behaviors without feeling like they are losing themselves or need to edit what they say.

It's difficult to fight against these ideas when they are so pervasive, but we have to do it, friends. We have to liberate each other from the toxicity, learn how and where it hides, and like anything worth doing, practice how to live without it.

More like this
The 19 Best Tweets & Memes About Bisexual Awareness Week
By Lexi Inks
10 Ways To Be More Empathetic To Your Partner
By Raven Ishak and Lexi Inks
Are Quality Time & Gift-Receiving Love Languages Compatible?
By Lexi Inks
Why A Libra & Libra Couple Might Become Codependent
By Kristine Fellizar
Get Even More From Bustle — Sign Up For The Newsletter