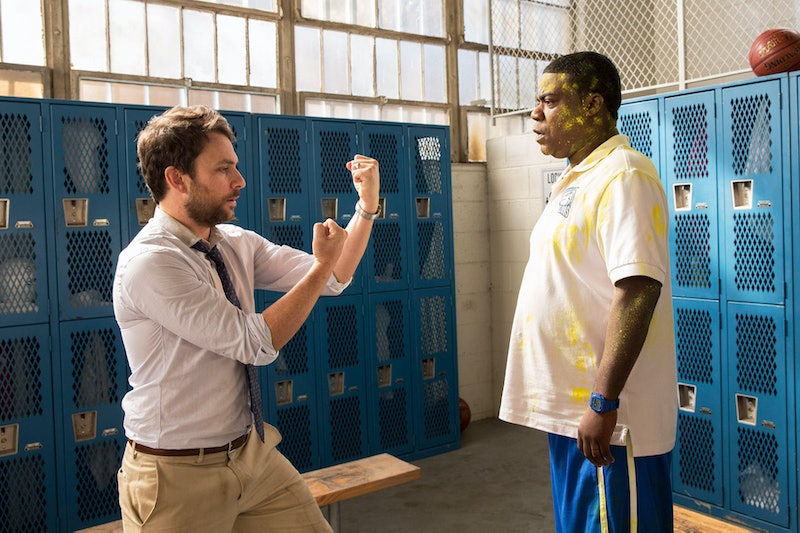 Charlie Day isn't looking for a fight. Therefore he isn't too removed from his non-confrontational Fist Fight character. In the upcoming comedy, premiering Feb. 17, two people in high school settle their differences the old-fashion way: a fist fight. Only the squabble isn't between two students, it's between two teachers — the hot-headed Strickland (Ice Cube) and the passive Campbell (Charlie Day). Sitting down with Day I realize he's a warm, relaxed, and unassertive guy. And during my time with the actor I learn how his past confrontations have become important lessons for the Always Sunny star. And now he's passing along this knowledge to his five-year-old son.

But how could someone possibly argue with Charlie Day? He's one of the most non-intimidating, lovable people in the biz. "I’m not a badass," he says with a laugh. "I try to avoid confrontation all all costs. Not because I’m scared of it, but because I often think, ‘This isn’t necessary,'" the actor says. But like his Fist Fight character, the 41-year-old would step up to the plate if something were to really grind his gears. In Day's case, this something is witnessing injustice.

"If something is truly unjust it gets under my skin," the actor says. "There’s enough crazy in me that you probably wouldn’t want to fight me. If I fully unleash that maniac... I don’t know what he’s capable of." He explains that when he was younger, he'd purposefully get into the middle of fights and break out in a wacky dance or distraction to prevent them from happening. "I’m not afraid to be in the middle of it," he says.

That hasn't changed now that he's grown up. He says he recently saw a fight break out between two kids: "I’m not someone who runs from that. I ran downstairs to get in the middle of it," Day explains. "I was like, maybe someone will recognize me and they’ll just calm down for a second."

Also like his character, Day is a family man. He says that as an actor, being a physical presence in his family's life is his number one priority. "Nothing is more devastating to me than being away from [my son]," he says. Being an active guide in his young son's life is everything to Day, especially to teach him how to deal with fighting as he grows older. He uses his own life experience to do so.

"People bullying you builds character sometimes. There are certain people that I still don’t care for in this world, but I think it motivated me," he says. I ask if he ever gets worried about his son getting bullied in school. "I think about it," he says. "I’m not too worried about him being bullied for two reasons. He’s the biggest kid in the world for some reason. He hit the genetic jackpot, he’s a giant," he says with a laugh.

The second, more serious reason is because of the values he instills in his son. "There is a kid in the school who gets under his skin and he asks me all the time, ‘Daddy, why doesn’t so-and-so like me?,'" Day says. "I’ll come up with various things like, ‘So-and-so hasn’t learned how to play with kids yet, maybe he thinks teasing is how to get attention.’" Although he's got it covered, there is one thing the actor worries about.

"I’m more worried that he would be a bully to someone. That would be more devastating to me," Day says. "I don’t want him to ever be the bully." And he'll continue teaching his son to pick his battles just as he does.

Because to Day, being a non-confrontational person isn't a sign of weakness. "I just want everyone to be happy. But what’s wrong with that?," Day says. "I understand unhappiness is part of human nature, but if it’s unnecessary, I’d prefer if people weren’t unhappy." If only everyone could adapt such a positive mindset, what a happier world this would be.