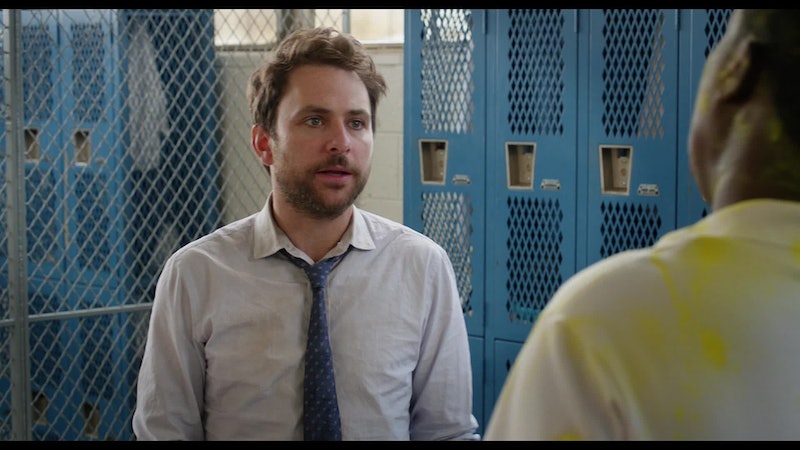 High school teachers aren't usually the people you expect to see learning how to come out on top in an after-school fight. However, in this Fist Fight exclusive featuring Charlie Day, Tracy Morgan, and Jillian Bell, that's exactly what happens. Day plays Campbell, a teacher who is forced to bone up on his fighting skills before his end-of-day fight against a former fellow teacher. And this Fist Fight exclusive proves not everyone's cut out for physical combat.

The circumstances of Fist Fight seem like an average school — there are a bunch of pranks, some budget cuts, and everyone is a little distracted. However, in this case, there's one difference — a heart-pounding battle between two adult teachers. When Campbell "snitches" on his colleague Ron Strickland (played by Ice Cube) to the administration, it leads to Strickland's termination. What follows is the former educator's ultimate desire to beat the cafeteria's mystery meat out of his snitching fellow teacher. Strickland challenges Campbell to an old-fashioned fist fight at the end of the school day — and the timid English teacher feels obligated to accept.

In the exclusive, the gym teacher played by Morgan, who is inexplicably covered in yellow paint, attempts to teach Campbell how to fight. He gives encouraging words of wisdom like, "you're so pissed off right now you might even win" and "it only takes one punch." However, when Campbell gets in a laughable fighting stance with his arms out in front of him fisticuffs-style, the gym teacher reacts accordingly, shouting: "Are you serious? Is this the 1700s? Get your fists up! Protect yourself before you get punched in the head!"

When Campbell screams, "Alright, like how! Show me how!" the guidance counselor, Susie, punches the meek teacher forcefully in the head because he "said like how" and she admittedly "wasn't listening to the conversation." This exclusive is just a small snippet of all the physical comedy Day embraced for the role — and it looks hilarious.