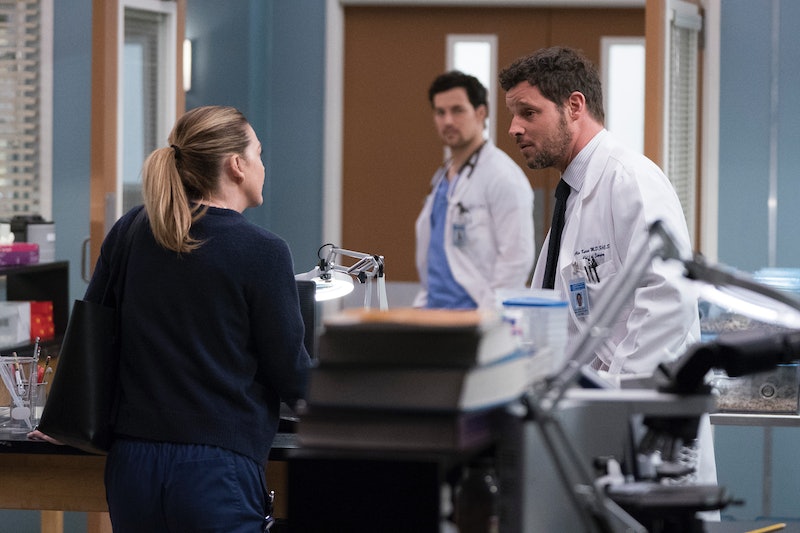 Because the halls of Grey Sloan Memorial Hospital are never drama-free, Dr. Grey may soon be faced with a choice between her best friend and her lover. In preparation for the upcoming clash, viewers may want to refresh their memories on what happened between Alex and DeLuca on Grey's Anatomy, and how that whole issue was resolved since it feels like ages ago.

There are clearly still lingering resentments brewing between the two most important men in Meredith's life, thanks to the unsatisfactory way the unfortunate situation between them was dealt with.

Those tensions bubbled up in last week's record-breaking episode, when Meredith came clean about her relationship with Andrew to Alex. Alex reminded Meredith that she'd been mean to Jo for a long time after they started dating, and Meredith reminded Alex that he nearly beat Andrew to death that one time. Ultimately, Alex simply asked Meredith to make sure to report the relationship to HR — and told her he hoped she would be happy.

But those old resentments aren't going away so easily, apparently. The synopsis for the Mar. 7 episode, "Blood And Water," tease that those bubbling tensions will soon be boiling over. "Meredith finds herself having to side with either Alex or DeLuca during a difficult situation, but she doesn't want to betray either of them," the synopsis ominously declares.

Of course, fans will almost certainly remember the big event that precipitated the tensions between Andrew and Alex. Back in the Season 12 finale, a distraught and drunk Jo confided in Andrew (who had a crush on her at the time) why she had declined Alex's proposal of marriage: because she was already married and living under an assumed identity. Of course, viewers would learn plenty about Jo's abusive estranged husband, Paul, in time; but at that moment, the revelation was shocking.

A gentlemanly Andrew helped the inebriated Jo home, got her some water, and was in the process of helping her into bed… right when Alex came home. Getting the wrong impression of the situation, he proceeded to brutally beat the resident, landing DeLuca in the hospital. Although the doctors were temporarily concerned that he was going to lose his vision, Andrew eventually recovered just fine — physically, if not emotionally.

A rightfully furious Andrew decided to press charges against Alex; and not just a misdemeanor, but a much worse charge of felony assault. Just when it looked like Alex might end up going to prison, Andrew suddenly changed his mind and decided he wanted to drop the charges. However, since he had decided to pursue felony charges, the case was no longer in his hands, but rather the hands of the state, and dropping the charges wasn't up to him. Thankfully, Andrew — the key witness — threatened to sabotage his own case, so the prosecutors had no choice but to drop it after all.

But why the change of heart? In a charged confrontation with Alex, Andrew revealed that it wasn't because he had suddenly decided to forgive his attacker out of the kindness of his heart. He hadn't done it for Alex at all; he had decided to drop the case to protect Jo. If the case had gone to court, Jo's real name and whereabouts would have become a matter of public record, and her abusive husband would have been able to find her. So Alex managed to avoid prison time, but Andrew still clearly harbored ill will towards the man who put him in the hospital.

The final confrontation between Andrew and Alex, in which DeLuca revealed his reasoning behind dropping the charges, took place in the twelfth episode of Season 13, "None Of Your Business." In the two full seasons since then, the two men have barely interacted onscreen. But now, Meredith's budding romance with Andrew is putting the resident and the Chief of Surgery back on a collision course of resentment. It's unclear what exactly will make those tensions boil over, but the situation is clearly bound to put Meredith in a tough position.

As the sole remaining member of their original team of interns, Cristina officially left Alex in charge of Meredith when she departed for Switzerland at the end of Season 10. Ever since then, Alex has been Meredith's substitute "person," and the two have shared a bond that has only deepened and enriched with time in a way that's been lovely to watch. But Andrew represents Meredith's first real relationship since her husband Derek died in Season 11, and the first time she's really opened herself up to the possibility of love again. It would be painful to watch Meredith have to choose either of these vital relationships at the expense of the other.

Fortunately, viewers know Dr. Grey too well to think that she'd allow herself to be cornered into such a binary decision. The resilient and pragmatic surgeon will undoubtedly find a way to navigate the minefield of resentment and get these two knuckleheads to acknowledge that they're both important to Meredith — and there's room for both of them in her life.