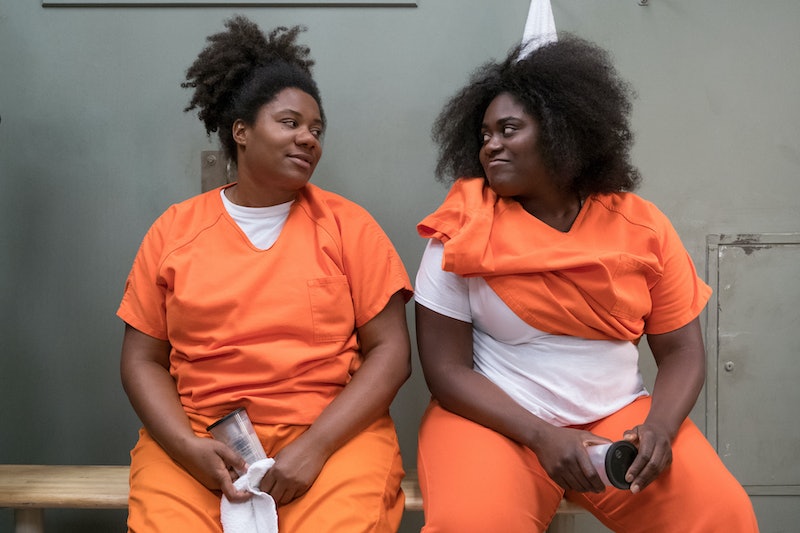 Orange Is the New Black has always made a point to lean into hard-hitting topics that shine a light on injustice, but amid all the turmoil and heartache, some beautiful friendships have also blossomed throughout its six seasons. However, last time fans checked in, two former pals had a serious falling out. And before diving into Season 7, you may need a refresher on why Cindy and Taystee aren't friends anymore on OITNB.

As you may recall, the end of the Litchfield riot resulted in the accidental death of C.O. Desi Piscatella. He was shot by one of the many CERT officers who were in the process of infiltrating the prison and rounding up the inmates. But instead of taking responsibility for their mistake, the CERT team decided to blame it on the inmates who had been hiding out in Frieda's secret bunker. The Feds and the prison higher-ups wanted to find someone to face the consequences for Piscatella's death, which is what led to those Ad Seg interrogations at the beginning of Season 6.

So what does all of this have to do with Cindy and Taystee's strained relationship? Cindy and Suzanne saw the CERT officers plant Piscatella's body in the bunker, and while being questioned by FBI agents, it was revealed Cindy's DNA was found on the gun that killed Piscatella. She then accidentally revealed she gave the gun to Taystee, implicating her friend, and decided to go along with it in order to save herself. When Cindy appeared on the witness stand during Taystee's trial, she told the jury that the last time she saw Taystee, she had been holding a gun at Piscatella's head, even though she knew he had left the bunker alive. Taystee was used a scapegoat for the crime and Cindy's testimony played a pivotal part in why she was convicted.

Taystee now faces a life sentence in prison knowing full well that she's innocent. That in and of itself is a heartbreaking thing to grapple with; finding out that one of your best friends helped make it happen is outright devastating. So yeah, it's understandable that Taystee wants nothing to do with Cindy right now, or possibly ever. She's hurt and feels betrayed like any person would.

However, Cindy isn't walking away from all of this unharmed. Guilt has a tendency of manifesting itself in interesting ways, which explains why Cindy has been experiencing such terrible back pains. She absolutely feels bad about what she did and tried to undo her mistake at the last minute, but alas, it was too late at that point. She should've just been honest at the very beginning. But since the justice system has historically been stacked against her, it's hard to fully blame her for wanting to look out for herself.

Maybe Taystee would've been found guilty either way, but it's the principal of the thing. Taystee has proven that she'll do anything for the people she loves (just look at everything she's gone through to try and get justice for Poussey!). That's why it hurts so much for her to discover that, when push comes to shove, they won't do the same for her.

Will she and Cindy be able to mend their friendship? Fans will just have to watch the seventh and final season to find out.