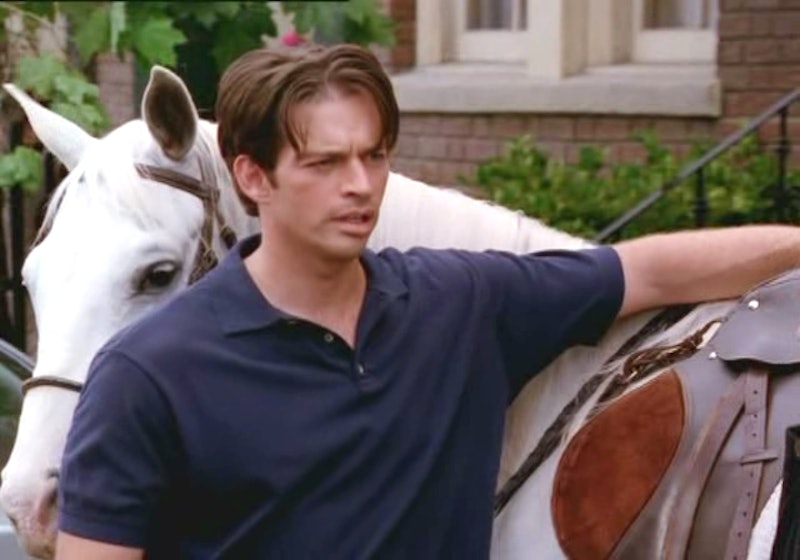 Though he didn't appear until the fifth season, Harry Connick Jr. was a memorable addition to Will & Grace — and might even be how you learned what Doctors Without Borders was as a kid. What happened between Grace and Leo on Will & Grace is probably going to be relevant now that the series is coming back for a revival on NBC. Never fear if you've forgotten how their relationship went down; this recap will get you up to speed. Grace's one time husband was far from perfect, but he literally rode in on a horse, never forget.

At the end of Season 4, Will and Grace were preparing to have and raise a child together. They were ready for families, but not currently in relationships, and decided to take the parental plunge. "I know that I was a little freaked out before about waiting for Mr. Right," Grace said, "but it's a fantasy. I mean, what am I waiting for, some guy to ride up on a white horse?"

That is, of course of course, exactly what happened. While rushing to the fertility clinic with Will's sperm in hand, she ran into a lamp post and got knocked out, only to wake up with a hand extended to her rescue. Though only Leo Markus's astride silhouette appeared in the finale, that's how they met.

He's Jewish, he's a doctor, could Grace or her mother have asked for anything more? Leo treated Grace's head wound and gave her a ride (on the horse) to the clinic. You know, as one casually does in Central Park. He asked her out a couple times; she was interested but initially declined, and the rest is history.

That history is as follows: The fact that Grace has made this huge decision to get pregnant with Will made the beginning of Grace and Leo's relationship complicated. They had promised not to date while trying to have kids, and Grace broke her promise by calling the good doctor back. The episode "The Kid Stays In The Picture," in which Grace came clean to Will about dating Leo and their fight results in Will kicking her out of the apartment, won Debra Messing her first and only Emmy in 2003.

That conflict might also have contributed to Will's dislike of Leo at first, too — even though he later gave Grace away at her wedding. While Leo appeared to Grace as a knight in shining armor, their relationship was bumpy. They first got married spontaneously, in a Today Show group marriage in Central Park — so spontaneous, in fact, that the two realized at the reception how little they know about one another. However, that ceremony wasn't legally valid, so they planned a traditional Jewish ceremony with family present.

That happened midway through Season 5. Over the next year and a half, the two moved to Brooklyn together and began their married life. They discovered that Leo's ex-girlfriend Diane happened to be the only woman Will ever slept with, way back in college. But Leo was gone for months at a time due to his job, and at the end of Season 6 Leo admitted to sleeping with another woman in Cambodia. Grace asked for a divorce.

Years later, in what was the final season, Grace and Leo encountered one another on a plane... in more ways than one. Grace became pregnant, however Leo was engaged to another woman — because the person who cheats with you will always cheat on you and vice versa, never forget it. Grace decided to raise her daughter with Will until Leo returned and said he was still in love with her. Grace got back together with Leo, they moved back to Brooklyn to raise Lila, and Grace fell out of touch with Will.

...Psych! Well, not really. That is what happened in Will & Grace Season 8, but many of those details — specifically the original series finale — are being ignored and forgotten for the upcoming Season 9. It's unclear what the actual state of Leo and Grace's relationship will be when the series returns. That said, their history is rich, and it wouldn't be the same show without him.