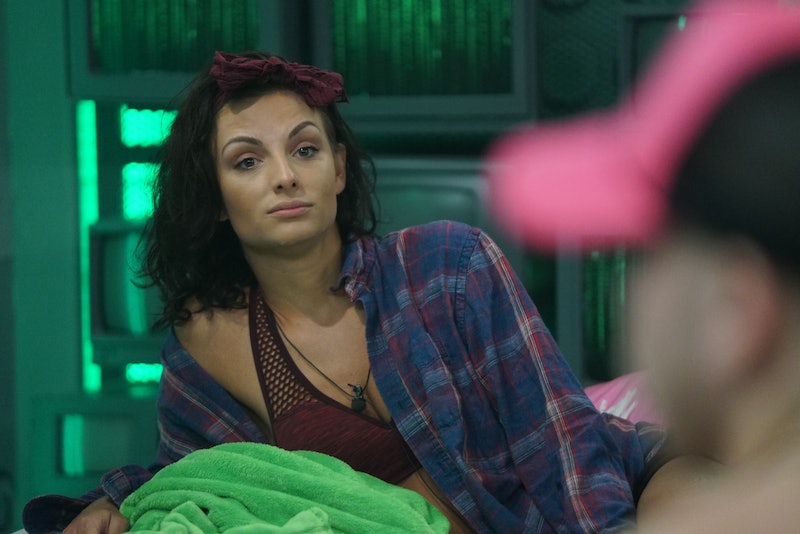 With the eviction of Rachel, Big Brother 20 continues to be one of the most surprising seasons of the show in recent history. After being blindsided by her own alliance, Rachel sat down for a tearful exit interview with Julie Chen that ended with Rachel witnessing a cruel and insulting goodbye message from her former in-house bestie Angela. If you don't know what happened between Rachel and Angela that inspired such anger in the latter's goodbye message, don't worry — Rachel has no clue, either.

The blindside eviction was eventful long before Angela's shocking goodbye message, thanks to Brett's second memorable eviction speech of the season. Just as his first speech of the season attempted to blow up the house by suggesting that Rockstar had flipped on her alliance, Brett took the opportunity to try and throw Rachel and some of his fellow houseguests under the bus. Brett claimed that Rachel was the head of an all-women alliance called the "Maneaters," comprised of all of the women in the house except for Sam, and that they were targeting the remaining men in the house. After being publicly lied about by Brett and voted out of the house by her own alliance, Rachel stormed out of the house to do her exit interview — which is when the events of the evening went from unexpected to downright brutal.

Freshly shellshocked by the blindside, Rachel found no relief in her exit interview with Julie Chen. Big Brother viewers commented on Twitter that Chen's questions during the interview felt more like an interrogation than the typically relaxed interviews of weeks' past. Chen pushed Rachel to not only explain why she thought she had been evicted, but asked Rachel to try and guess the names of the people who evicted her while she was attempting to regain her composure. While Chen's interview questions may have been more aggressive than they've been all season, the worst part of Rachel's eviction night was still yet to come.

Rachel's goodbye videos were all pretty typical for a Big Brother eviction and didn't draw much of a response from Rachel — until Angela's was played. In her video, Angela told Rachel "you talked yourself onto the block, you lied to my face and your stories don't make sense." Rachel's jaw dropped as Angela continued, "our final two deal is about as irrelevant as you were week two," suggesting that Rachel has not been of any use to her alliance for nearly a month. "I'm sorry Rachel, but you're going home," she concluded. Angela's message was the kind of goodbye one may expect from a Big Brother nemesis — not a close ally. When Rachel asked Julie Chen for an explanation, all that Chen had time to say was "She didn't believe you."

Rachel and Angela had been friends since the beginning of the season, and were one of the core partnerships of the Level 6 alliance. The two had even vowed to make a "final two" alliance with each other, but things took a turn when Angela started suspecting that Rachel had been lying to her. In a miscommunication worthy of a network sitcom, Rachel had told Angela that Tyler was trying to target the two of them, which was not true. Angela expressed this to Kaycee, who told Tyler, who told Angela that he had never said such a thing. What Angela didn't know was that Rachel thought she was telling the truth because Bayleigh had lied to Rachel, and was the originator of the lie about Tyler. However, the thought of Rachel lying seemed to inspire Angela to scorch her friendship with Rachel.

Rachel's terrible, horrible, no good, very bad evening ended with her former ally, Angela, winning the power of HoH for the following week. Angela's new power in the house is the final cruel twist in the end of Rachel's time in the Big Brother house, who had been nothing but loyal to the alliance that had sent her packing. Big Brother tells viewers to "expect the unexpected," but no one could've predicted how brutal Rachel's exit proved to be.