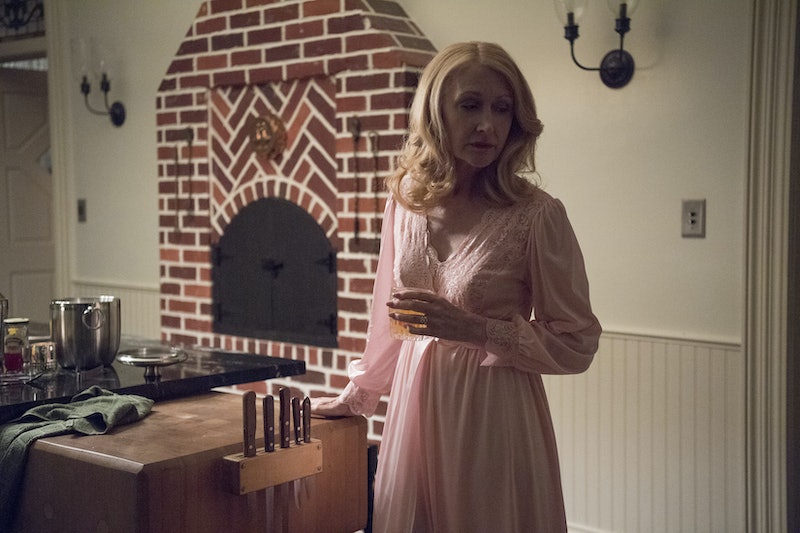 Major spoilers ahead for Sharp Objects Episode 4, "Ripe." The fourth episode of Sharp Objects opens with Chief Vickery's wife, Jocelyn, making him breakfast. She's likely done this simple gesture for years, but it's refreshing to see a selfless action in a show filled with self-involved characters. Vickery (Matt Craven), on the other hand, seems unhappy with his marriage. He wakes up expressionless, eats his breakfast in silence, and gives his wife an unenthusiastic peck before heading out the door. It's only when the chief interacts with Camille's mother (Patricia Clarkson) that his expression changes. So what happened between Adora and Vickery on Sharp Objects? They certainly seem to have a past.

Nothing is ever said explicitly, but it's implied that the two had a tryst at some point. While it's unclear whether their respective spouses know, Alan (Henry Czerny) seems to dislike — or at least distrust — the chief of police. When Vickery pays Adora a visit to discuss Calhoun Day, Alan seems reluctant to let him past the threshold. "How's Jocelyn?" Adora asks the chief, once he's inside. "Fine. Sends her love," he answers. "Well, that's sweet," she responds. "Send it back, of course." Their conversation seems very performative — did Jocelyn actually send her love? It's doubtful, and even if she did, audiences weren't privy to that discussion. However, things take a turn when Adora essentially blackmails Vickery into letting her put on Calhoun Day, even though it's not the most appropriate time. "That's what I love about you, Adora," Vickery laughs. "You never pull your punches." "That the only thing?" she asks.

Alan, meanwhile, is spying on their conversation from the other room. Adora's husband is a passive figure and allows her to both say unspeakable things to Camille (Amy Adams) and coddle Amma (Eliza Scanlen). He seems to assuage his reservations about what's going on in their cavernous house with drink and music, which he often listens to with noise-cancelling headphones. However, he finally confronts his wife about Vickery. "How is it that you show more compassion for the local civil servants than for your own husband?" he asks, softly. "How is that?" Adora responds by throwing a shoe at him and hissing, "If you are speaking about the chief, I am — I am done with this conversation!" Alan responds, "Seemed to me you could talk to him all night!"

And he's not wrong. There's a subtle shift in the way they both act around each other. Vickery straightens his jacket and takes off his hat in her presence, while Adora makes sure she looks presentable before sitting down with him. And it's not just Alan who notices their body language. Vickery also pays Jackie O'Neil (Elizabeth Perkins) a visit to ask after Camille. "Vickery," she says. "Jocelyn know that you're out calling on another woman late at night?" "Not if you don't tell her," he says wryly. Whatever happened between Adora and the chief, Jackie clearly knows about it.

It also becomes clear in this episode that Adora is a hypochondriac. It's been hinted at in previous episodes, but when Camille's mother frets over one small cut from her rose bush and begs off of a luncheon, there's obviously something deeper at play. Jackie, of course, sees right through her friend's excuse, telling Camille, "Well, that's a crock of sh*t." But the men in her life tend to her every need. Alan treats her like fragile china, and when Adora offers Vickery the offending hand to inspect, he touches it tenderly. "Ow!" she exclaims, childishly.

Indeed, Adora's melodrama is likely a cry for attention, like her two daughters are accustomed to seeking. The way she puts her hand on her forehead like she's a maiden who needs her vapors is frankly bizarre. Especially when audiences remember how unsympathetic she is to Camille's incredibly legitimate issues. Her eldest daughter self-harms to escape her pain, while Adora seems to invent it for herself.

So whether Vickery and Adora had an actual affair, it's likely over at this point. Audiences don't see any covert meetings or secret messages being passed back and forth. They interact with each other in the light of day, with spouses hovering silently in the background. Yet it appears as if there's some lingering feelings on both sides. And what is an episode of Sharp Objects without the audience discovering that there's yet another secret in Wind Gap?