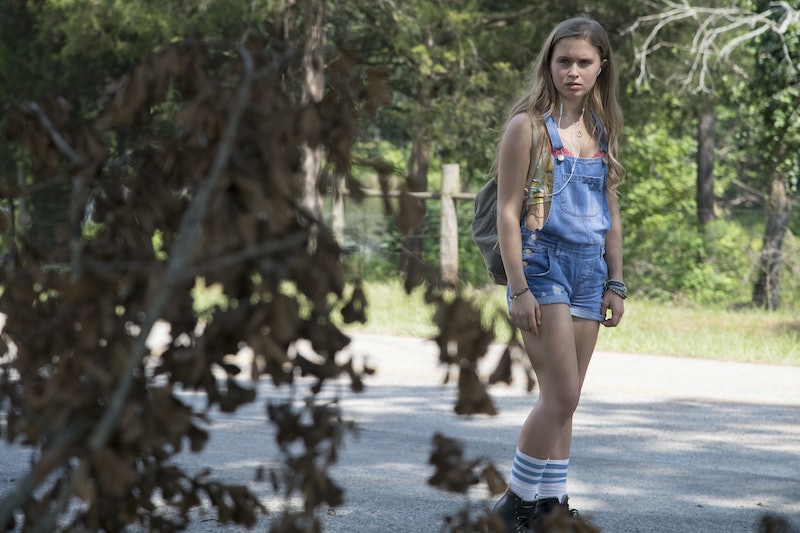 Major spoilers ahead for Sharp Objects Episode 3, "Fix." About halfway through Sharp Objects's third episode, Amma Crellin (Eliza Scanlen) is soaring down a road on roller skates. She's wearing a crop top with lemons on it — an edgier version of the same print she's worn in the house — and overalls. Camille (Amy Adams) spots her half-sister and trails the young girl to the pig farm. Why would Amma go to such a disgusting, inhumane place? It smells, there's squealing hogs everywhere, and flies buzz overhead. Amma is handed a piglet, and she smiles wryly at her sister before disappearing through a back door. It's undeniably creepy. But is Amma from Sharp Objects evil, or is she simply another rebellious teenager?

Amma's covert visit to the hog farm is just one of three pig references in this episode. The first occurs at a raucous teen party, where some boys are running after a squealing pig. Camille's younger sibling hollers after them, "You gonna bring me some bacon?" How can she both so flippant about killing these animals (her mother owns the hog farm, after all), and hold a baby pig so tenderly?

"You need to understand: Your sister does not see herself in a good light," Adora (Patricia Clarkson) warns Amma. "It's caused her difficulty. You need to be careful with Camille. She is not someone to be admired." And while this was supposed to make Amma wary of her older sister, it has the opposite effect. "Mama says I need to be careful around you," she tells Camille later on. "Is that true? Are you dangerous?" Camille responds that she just hung out in parking lots and talked to boys. Was the reporter ever the dangerous one, and could her rebellious half-sister be worse?

The Wind Gap parking lot, by the way, was the place, as Camille tells Detective Willis (Chris Messina). "This was party central," she says. "It was like — like a midwest Lord of the Flies. Bonfires and drinking and heavy pettin'." As viewers may recall from high school English class, Lord of the Flies involved a group of boys getting stranded on an island. They quickly turn savage and murder one of their more gentle members, whose name was Piggy. And who could forget their chilling, "Kill the pig!" chant?

So when Amma and her friends roll up to that same parking lot where Camille and Willis are hanging out, it comes as no surprise that she wants to follow in her sister's footsteps. Amma, by the way, is wearing her usual skates and is sucking on a lollipop. But instead of the usual schoolgirl flirtation, Amma decides to boldly hit on detective Willis. She calls him "Dick" and asks, "When are you going to take us for a ride, huh?" He answers, "Well, I'd have to arrest you, first." "Handcuffs and all?" she asks. "Sexy."

Could Amma's overt sexuality be a reaction to Adora's repressive house, or is it something more? Perhaps she feels competitive with teenage Camille and wants to make her own mark in Wind Gap. After all, they already compete for their mother's attention — does she have to compete for popularity in town, too?

But the real kicker happens when Amma sticks her used lollipop in Camille's hair. The journalist turns and roughly grabs her wrists. "You gonna hit me?" Amma asks, provocatively. "Be dangerous. Be dangerous like mamma said. You could kill me right here, you know why? Dickie boy still couldn't figure it out."

While it's true that most teenagers have rebellious streaks, Amma's provocation of Willis suggests more than insurgence. To be so flippant of a murder investigation — especially one involving her classmates — seems particularly heartless. What's more, Amma is her friends' ringleader, and she, Kelsey, and Jodes are inseparable. "They love me," Amma tells Camille of her cohorts. "They'd do anything for me. I just ask." What, exactly, has she asked her friends to do for her?

That being said, it's important not to dismiss the negative effect Adora has had on her two daughters. One is lashing out due to being smothered, and the other checked herself into a mental hospital in a particularly disturbing series of flashbacks. So whoever ends up having killed Ann and Natalie (and you can certainly spoil yourself on the book ending), there's certainly something going on with Amma. Or perhaps it's the whole Crellin house — that beautiful, antebellum mansion surrounded by sharp rose bushes and filled with secrets.

More like this
David Tennant’s Transformation In ITV’s 'Litvinenko' Is Astonishing
By Sophie McEvoy
The 'Firefly Lane' Book Ending Teases Way More Tears To Come In 2023
By K.W. Colyard
Everything To Know About The 'Daisy Jones & The Six' TV Series
By Maxine Harrison
'Broadchurch' and 'I Hate Suzie' Casts Join Forces For Gritty BBC Drama
By Bustle UK
Get Even More From Bustle — Sign Up For The Newsletter