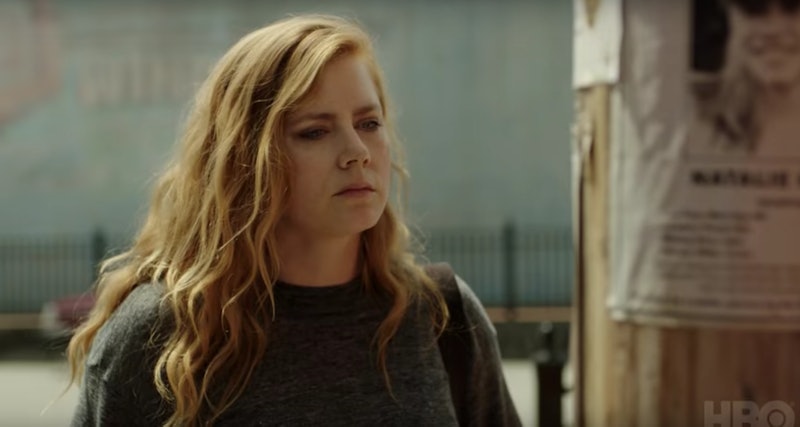 Despite being only three episodes into its debut, HBO revealed that Sharp Objects will not return for a second season, according to Deadline. The limited series, which got off to an amazing start, debuting to 1.5 million viewers, was the most-watched new HBO series premiere since Westworld premiered on the network in 2016. Deadline also pointed out that Sharp Objects' striking viewership numbers are up 36 percent from the debut of HBO's hugely successful Big Little Lies.

When speaking to Deadline during the Television Critics Association’s tour on July 25, HBO's president of programming Casey Bloys shared the news that Sharp Objects will come to an end as a limited series due to its haunting premise. Adding more insight into the decision, Bloys pointed out the toll that the series' lead character, which is played by Amy Adams, took on the actor's psyche during filming. He explained:

“Unlike Big Little Lies where all of the stars wanted to come back, Sharp Objects, it’s a very dark character, very dark material. Amy doesn’t want to live in this character again and I can’t blame her, it’s a lot to take on for an actress. So no plans for a second season. We are very happy with this living as a limited series.”

According to Entertainment Tonight, Adams said during the same panel: "I had insomnia and anxiety and I'd have to realize that I didn't own it. It belonged to Camille."

Big Little Lies — which Sharp Objects has been often been compared to — similarly began as a limited series on the premium network. However, due to its award-winning success and major fanfare, HBO ordered a follow-up season – something which seemingly all of BLL's ensemble cast agreed upon.

Although Sharp Objects has drawn many comparisons to BLL due to its twisty plot line, and female-led landscape, the fact that it was directed and produced by Jean-Marc Vallée is what seems to give it a similar feel to the Nicole Kidman and Reese Witherspoon produced series in terms of aesthetics and feel.

While there are many things that feel alike, it's worth pointing out that the eight-part Sharp Objects series, which is based on Gillian Flynn’s 2006 novel of the same name, is a bit of a departure from the Real Housewives-esque tone of Big Little Lies and features a much more horrific and terrifying narrative than that of even her previously adapted novel, Gone Girl, which was also adapted into a film starring Rosamund Pike and Ben Affleck.

Objects follows the story of Chicago-based reporter Camille Preaker (Adams) who returns to her hometown of Wind Gap, Missouri and reunites with her estranged family in as she investigate the murders of two preteen girls. Throughout her probe, Camille is plagued with long-standing mental-health issues. Amongst other things, she must also confront strained relationships with her mother and sister that have lasted for years.

During a panel at this summer's TCA press tour, Adams explained how mentally grueling it was to take on the suffering that Camille endures in the series, according to Variety. After revealing that she dealt with bouts of insomnia during filming, Adams said she had breaks in her sleep where she would have “insane conversations with myself.”

Though things may have been difficult for Adams while diving deep into Camille's struggles with with addiction and abuse, the 43-year-old actor seems pleased with how the character represents women afflicted with trauma. Adams elaborated,

“One of the things that’s been really nice — and this is very much due to everybody involved — is that the reactions [have been that] it’s of an accurate telling of female trauma. And that felt very validating to me because it isn’t explored as often. We often make females the victims, but in this, Camille is very active.”

Deadline additionally notes that Sharp Objects is shaping up to be a shoo-in for HBO in terms of Emmy consideration for next year with its previous limited series Emmy winner Big Little Lies, transferring to drama series category for its second season.

While Sharp Objects is so good that it's certainly worthy of a return, the concluding events of its narrative - at least in terms of the novel – appear to make things pretty final. That aside, however, fans should be totally understanding of the fact that returning to the character could prove to be too much for Adams.