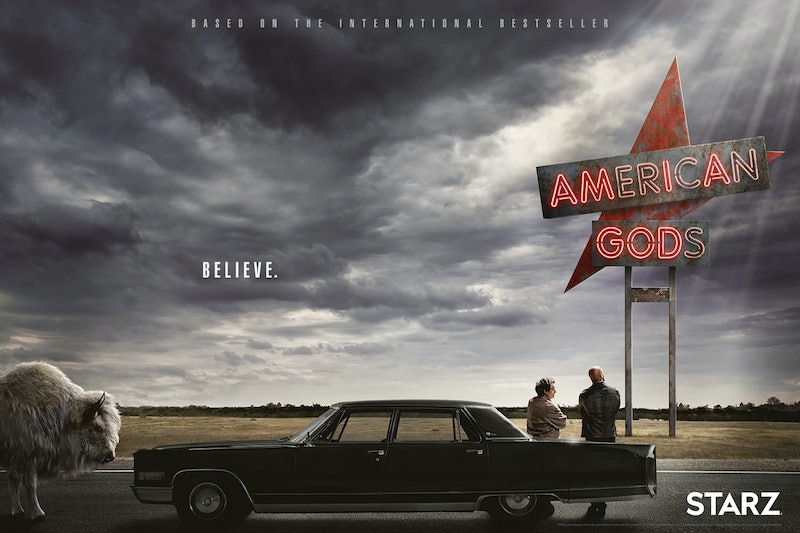 After years of hints, teasers, and mysterious omens appearing in the night sky, Neil Gaiman's American Gods is finally hitting the small screen with a premiere on Starz at the end of the month. If you're a huge fan like me, you're probably getting your rune stones and all-American beer in order to kick off Shadow Moon's story the right way. If you've never read American Gods before, you're probably wondering what all the fuss is about.

And even if you have read and reread the book several times, America is a big place, and it has quite a few gods. A few details may have slipped your mind (or may have been so strange and otherworldly that you completely suppressed them). So here's a recap of the entire novel, from beginning to end, in case you need a brush up on the major deities of North America:

Fair warning, there are major spoilers ahead.

Shadow Moon has done three years in prison. He's kept his head down, served his time, borrowed a few books from his cellmate, Low Key Lyesmith, and now he's finally getting out. But on the day he's released, his wife dies in a car accident.

Numb with grief, Shadow heads home for the funeral. On the plane, he meets a man who calls himself Mr. Wednesday, who offers him a job on the spot.

His first night working for Mr. Wednesday, they meet a man called Mad Sweeney, who claims to be a leprechaun. Shadow is dubious, but accepts a "magic" coin from him. Shadow drops this coin into his wife's grave after her funeral, as a parting gift.

That night, while he and Wednesday are at a motel, Shadow's wife, Laura, appears at the side of his bed. Apparently, that leprechaun coin brought Laura back to life... but her body is still cold and slowly decomposing. She promises to keep looking out for Shadow, despite being mostly dead.

Throughout the book, we get short chapters that drop in on various other moments in the American present and past: vikings arrive in North America in the 9th century, a salesman and a cab driving jinn share a passionate night together, a prostitute swallows a man whole with her vagina. That sort of thing.

Meanwhile, Shadow begins to understand that Mr. Wednesday is some kind of incarnation of the ancient Norse god Odin. Together, they start reaching out to the other old gods hiding in plain sight all across America. Wednesday calls a meeting at the House on the Rock, a kitschy tourist attraction in Wisconsin that also happens to be a center of powerful, unseen forces.

It seems there is a war brewing between the old gods, who are quickly being forgotten, and the new gods, who are eager to take their place.

Shadow is kidnapped by two of the new gods' henchmen, who work for an unknown figure called Mr. World. Luckily, Shadow's zombie wife Laura rescues him, and Shadow is sent to find a Mr. Jacquel and a Mr. Ibis in Cairo, Illinois.

Shadow helps the Egyptian deities out in their funeral home, but he's still not safe from the new gods, who have taken a particular interest in him. So Wednesday sends Shadow to the sleepy little town of Lakeside, Michigan.

Lakeside seems perfectly pleasant... except for the children who go missing with alarming frequency. As Shadow begins to unravel that mystery, and become involved with some of the locals, Wednesday keeps dragging him off to recruit more of the old gods for the coming war—until the new gods decide to stop messing around and shoot Mr. Wednesday in the head.

As part of his contract, Shadow has to hold vigil for his fallen boss by hanging from the "World Tree" for nine days and nights. During this ordeal on the tree (and a short trip to the underworld), Shadow experiences a series of visions, and finally pieces together the bigger mystery at work:

Shadow realizes that Wednesday is his real father, making him something of a god himself. This whole war between the old gods and the new gods was orchestrated by Wednesday and the so-called Mr. World, who is none other than Shadow's old cellmate, Low Key (or rather "Loki"). Wednesday and Loki planned to pit all the gods against each other in a vicious bloodbath, leaving the two of them to soak up all of that sweet, powerful dead god energy.

Now knowing that this whole divine war has been nothing more than a two-man con, Shadow arrives at the roadside attraction Rock City just in time to stop an all-out battle between old and new gods. He uncovers the scheme and sends all the gods home. Mr. Wednesday's ghost fades away, and zombie Laura shows up to stab Loki, before finally returning to the dead herself.

Having safely averted metaphysical war, Shadow returns to Lakeside to solve the mystery of the missing children: it turns out they were being sacrificed to a kobold to save the town from economic depression. Shadow revisits several of the others gods and humans he's met in his travels, wrapping up several loose ends and repaying debts.

At long last, Shadow travels to Iceland, where he finds the Icelandic incarnation of Odin. The god explains that Mr. Wednesday was him, but that he is not Mr. Wednesday. Shadows accepts this, but returns Wednesday's glass eye to him anyway.

Then Shadow shows the god a coin trick, and goes on his way.