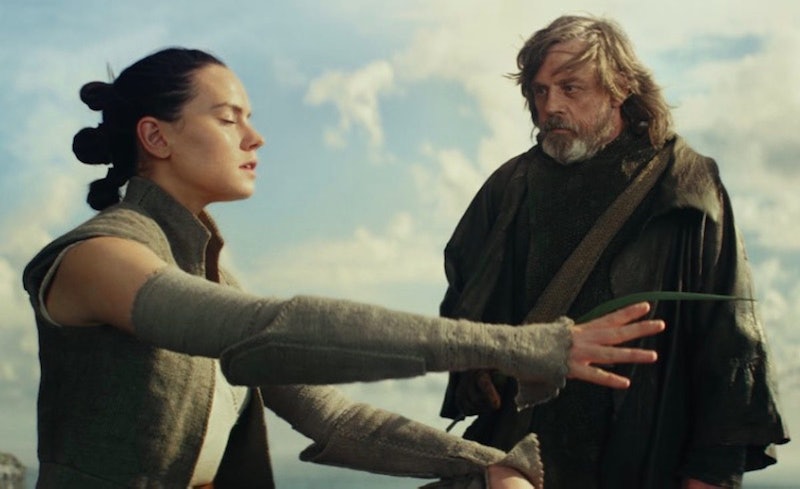 The Rise of Skywalker is a pretty bold title on which to end Star Wars' Skywalker saga, especially considering the events of the previous film. Fans were divided on what happened in The Last Jedi, as the movie often quite literally destroyed beloved Star Wars canon while tossing in new characters and ideas. Director Rian Johnson was criticized by fans, Rise of Skywalker director J.J. Abrams, and even actors from The Last Jedi over his choices, so in the lead-up to the final installment of the saga, let's break down exactly what those were.

The film opens amid an ongoing battle. After a fleet of First Order ships appear, General Leia (Carrie Fisher) orders an evacuation of the Resistance from planet D'Qar, but cocky pilot Poe Dameron (Oscar Isaac) disobeys her. His counterattack takes out an enemy dreadnaught, but at a terrible loss. The remaining Resistance members jump to hyperspace but are tracked by the First Order, including Kylo Ren (Adam Driver). When Ren senses his mother Leia on the ship, he hesitates to fire, but his accompanying Knights of Ren don't, and most of the Resistance leadership is blown into space. Leia survives using the Force, but barely so, which Johnson argued against fan complaints would be a natural instinct for a person with Force powers equal to her brother.

The Last Jedi answers the cliffhanger posed by its predecessor — Rey has finally tracked down reclusive Jedi Master Luke Skywalker, hands him his lightsaber, and asks him to train her. Right out of the gate Johnson sets up something that seemed heretical, or at least confusing to many as a major plot point: why would Luke Skywalker, someone whose entire previous character arc saw him growing to become and believe in the Jedi, turn his back on it so violently he hid and watched another evil empire rise?

Luke himself explains: hoping to restore the Jedi Order, he began training students, with his own nephew Ben Solo one of the first. Luke sensed the power and darkness within Ben growing, and nearly killed him instinctively (another fan point of contention Johnson defends). Ben, angry and betrayed, slaughtered all the other pupils. Since then, Luke's been holed up on an island, drinking green milk and believing the Jedi should die off. It takes some convincing, but he eventually trains Rey, who has a growing psychic connection with Ren.

Some fans thought the entire Canto Bight subplot was pointless. Then again, some thought the character of Rose was pointless, despite her both helping Finn become a better person, and showing it's small acts of rebellion and kindness that will win people to the Resistance more than flashy fights. Rose convincing a child laborer to free the racing animals not only got them back on mission, but took down a lot of Canto Bight as well. With DJ in tow, they sneak onto the First Order flagship, but are caught by the film's Boba Fett stand-in, Captain Phasma, another J.J. Abrams-established element too close to the original trilogy for Johnson — she's killed off as Finn and Rose later escape. Rey also arrives on the ship to confront Ren.

Disagreements between Holdo and Poe come to a head when Poe actively mutinies against her plan to slowly evacuate. Leia, now recovered, knocks him out. Holdo remains on the ship as decoy, ultimately sacrificing herself by slamming it into the First Order's flagship to disable it.

Yet another point of contention was Johnson's killing off Snoke, the Abrams-era Emperor Palpatine replacement, without explaining anything about him. As he told Entertainment Weekly, "[explanation] would have stopped any of these scenes dead cold." Ultimately, Ren betrays him and asks Rey to join him in ruling the galaxy, instead of joining her as a Jedi. Again, his uncle tried to murder him — not much enticement to rejoin.

In a similar blow, Ren tells Rey her parents were nobodies, another decision Johnson has had to defend. "If Rey had gotten the answer that she's related to so-and-so, had learned her place in the story, that would be the easiest thing she can hear. The hardest thing to hear is, ‘Nope, this not going to define you," he told Time. As Rey escapes, Ren declares himself the new Supreme Leader.

The remaining Resistance are trapped in a fortress, surrounded by the First Order. To distract the Order and allow the Resistance to escape, Luke appears, invincible to by weapons, and battles Ren. He's revealed to be projecting himself at a distance — the effort costs him his life, but he enters Jedi legend. That's where The Last Jedi ends, with the Resistance safely away, Ren growing in power and without a master, and Rey determined to continue the Jedi ways.