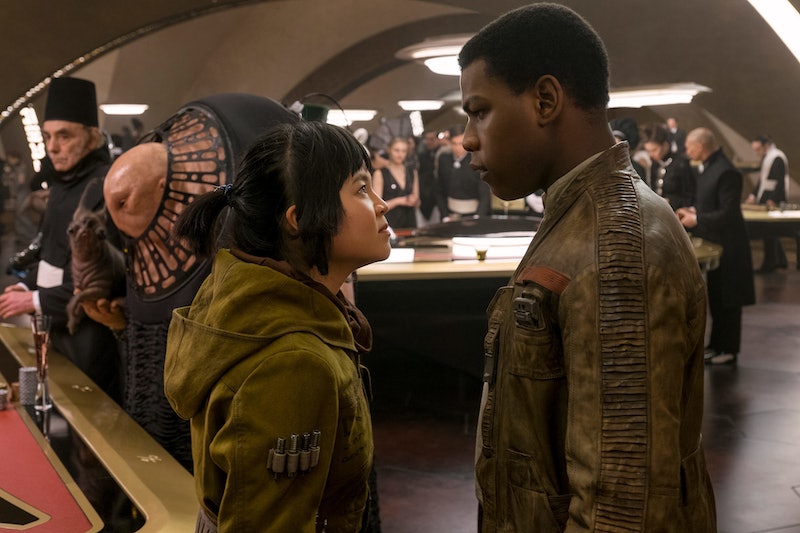 If you thought that fans had theorized every theory possible and spotted every clue in Star Wars: The Last Jedi, you were tragically mistaken. Thanks to the DVD and Blu-ray release of The Last Jedi, new details and insights about the film are being discovered every hour by fans around the world. And though we still have to wait until 2019 for the next installment to the series, Star Wars: Episode IX, at least now, instead of counting down the days, we can spend our time dissecting all the Last Jedi clues and theories that've arisen since the Blu-ray release.

The Last Jedi Blu-ray is full of fun behind-the-scenes content, including a gag reel with all 20 takes of Carrie Fisher slapping Oscar Isaac and deleted scenes. There's also a particularly revealing director's commentary, and a documentary focusing on actor Mark Hamill and his feelings regarding Luke's final journey called The Director and the Jedi. Some of the insights given on the special features don't necessarily add much to Star Wars theories, nor do they give any real hints as to what fans can expect from Episode IX. However, there are a few nuggets of information that fans will find very intriguing. Moreover, the interviews from cast and crew promoting the film's release that have been equally telling. And these are the most important Last Jedi clues and theories we've learned from it all.

Laura Dern, who appeared in the film as the no-nonsense Admiral Holdo, has revealed much more than the fact that she couldn't shoot a blaster without saying "Pew." She believes that Admiral Holdo was closely connected to the Force, or Force sensitive. "There's something about her that longs to protect it [the Force], and holds that with great care," Dern said in an interview with Entertainment Weekly. "Her primary goal was to protect the light, to protect the Force, and to keep the revolutionaries alive."

Holdo being Force sensitive adds to her deep friendship and connection with Leia, a relationship that has developed a fandom of its own. It also adds more motivation to her final sacrifice. She didn't just sacrifice herself to save the rebellion, she did it to protect the Force.

The Force Isn't A Superpower, It's A Lifestyle

Many disgruntled fans have already spent months arguing that The Last Jedi distorts the Force (Force projection, etc.), but in the behind-the-scenes featurette "Balance the Force," director Rian Johnson specifically states that he wanted the Force to be viewed as malleable. "The Force is not a superpower," he says, as reported by GameSpot. "I wanted in this movie to do a little bit of a reset lesson."

After The Force Awakens, many fans thought that Rey's innate connection to the Force meant she had to be a descendant of Jedi, sparking rumors that Luke Skywalker himself might be her father. However, by widening our understanding of the Force, Johnson also opens up the possibility that neither Rey, nor any other young potential Jedi, has any Jedi blood.

This brings us to the question of Rey's parentage. In The Last Jedi, it's said that the identity of her parents doesn't hold the key to any mysteries about her and her connection to the Force. Kylo Ren tells Rey that her folks were just poor scavengers who abandoned her on Jakku, and this "reveal" was met with many raised eyebrows from viewers. Some were disappointed, but others refused to accept it as truth.

This is Star Wars, after all, and fans don't always trust what they're being told. Perhaps the reveal was all part of a manipulation on Kylo's part? Alas, it seems that it was not. "If she were told that she is related to this person, or Luke is her this, or whatever, that would be the easiest thing she could hear. That's everything she wants," Johnson says in "Balance the Force," via GameSpot. "That would instantly define what her place is in this universe. So to me, the equivalent of 'I am your father' is 'Nope, you've got to stand on your own two feet. There are not going to be those easy answers here for you.'"

Yes, the documentary The Director and the Jedi does make it seem like Luke is officially gone for good. Why else would they have a feature length documentary devoted to the subject of Luke's return and eventual death? That said, both in the special features and especially in interviews, Hamill has been pretty vague about Luke Skywalker's fate, particularly how it pertains to Episode IX.

Speaking to IGN, Hamill revealed that George Lucas had told him that he wanted Luke to live through Episode IX, a wish writer-director J.J. Abrams could still choose to honor in the film. Moreover, Luke could return as a Force ghost, if he isn't revealed to still be alive. At the end of the day, Hamill said, Luke's role in Episode IX depends not on Johnson's film, but on Abrams. "It's an ever-evolving, living, breathing thing. Whoever's onboard gets to play with the life-size action figures that we all are," he said. Though he added that he hasn't been contacted about Episode IX, there's still plenty of time.

OK, this one is kind of a stretch, but one of the deleted scenes on the Last Jedi Blu-ray features a fun scene between Poe and Finn that would have sent shippers swooning. In the scene, Poe officially gives Finn his jacket — the one he took in The Force Awakens (aka the one Poe said looked good on him). And, yeah, they're pretty much the space boyfriends you need. Here's hoping we get more StormPilot in Episode IX.

Here's hoping more and more theories come out in the coming months.

More like this
Rupert Grint Just Shared A *Major* Update About Ron Weasley’s Future
By El Hunt
Anne Hathaway Shared A "Thrilling" 'Princess Diaries 3' Update
By Darshita Goyal
The 'Scream 6' Trailer Shows Off Hayden Panettiere's Return & Ghostface In NYC
By Jack Irvin and Jake Viswanath
Twitter Is Overjoyed By Angela Bassett’s Record-Making Oscar Nomination
By Maxine Harrison
Get Even More From Bustle — Sign Up For The Newsletter
From hair trends to relationship advice, our daily newsletter has everything you need to sound like a person who’s on TikTok, even if you aren’t.