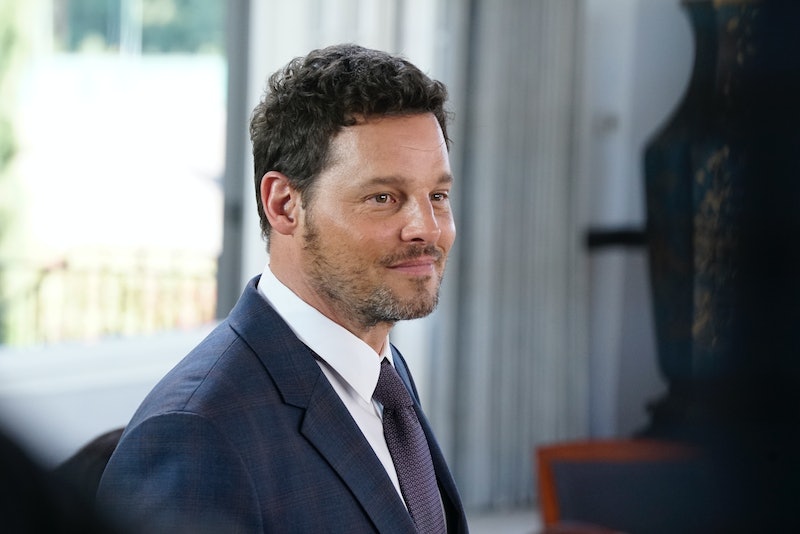 The wait is almost over. Fans will finally find out what happened to Alex Karev on Grey's Anatomy in the coming weeks, showrunner Krista Vernoff revealed to Variety. "It was a very careful threading of a needle, where we are giving a little bit of information and pain to Jo," she explained in a recent interview with the trade publication, referencing Alex's wife. "We're, episode by episode, illuminating the story of where Alex is. And it takes us quite a few more episodes to get there and to give the audience clarity."

As of the fourth Season 16 episode that's aired since actor Justin Chambers announced his Grey's exit on Jan. 10, the ABC medical drama had largely glossed over Alex's absence. There have been several mentions of the pediatric chief being away in Iowa dealing with family issues, but not much more attention had been given to the matter. Viewers did, however, get a piece of the puzzle during the Feb. 13 Grey's episode when Jo (Camilla Luddington) revealed Alex wasn't returning her calls. She explained to Amelia (Caterina Scorsone) that he's "going through something" and "needs time," but didn't give any additional details.

Vernoff also told Variety she "wanted to be careful" with wrapping Alex's storyline, given that "Jo went through so much pain and so much grief just last season." In Season 15, Jo tracked down her birth mother, who revealed some dark, painful truths about her past. After their meeting, Jo ultimately checked herself into a 30-day inpatient mental health program.

"And so it's a bit of a mystery [what's going on with Alex], so that we don't watch Jo in the same place that we watched her in last season," explained Vernoff. "We did it as carefully as we could. But it takes a while to get there."

Many fans have expressed restlessness, however, over Grey's delay in giving Alex the sendoff they feel he deserves, especially given that he'd been a part of the show for all 16 seasons. Still, the behind-the-scenes circumstances surrounding Chambers' abrupt departure remain unknown. As for the reason Chambers gave for leaving Grey's, he expressed the desire to "diversify [his] acting roles and career choices" now that he's turned 50. "There's no good time to say goodbye to a show and character that's defined so much of my life for the past 15 years," the actor added in the January statement to Deadline.

Hopefully Grey's and Vernoff will do Alex justice — and also not keep viewers in suspense for much longer.