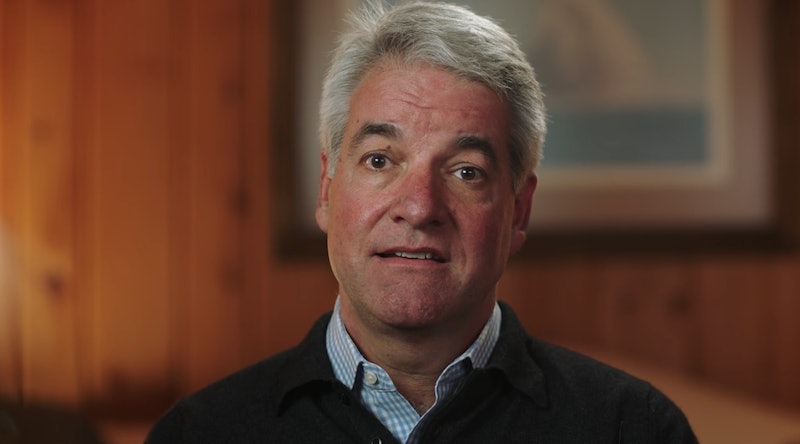 Netflix and Hulu both have their own Fyre Festival documentaries streaming right now, and while there's a lot that's attention grabbing in both of them, one of the most memorable figures of the whole debacle Andy King. The event producer appeared in the Netflix documentary and stunned audiences with his stories. But, while we hear a lot about what happened to him during the planning of the festival, what happened to Andy King after Fyre Festival? Besides participating in the documentary, of course.

First, here's what King relayed in the documentary: The event planner had known currently imprisoned Fyre Festival co-creator Billy McFarland for years, and planned events for him when McFarland had his other company, Magnises. Basically, King worked on Fyre Festival even though it sounded outlandish because he believed in McFarland as an entrepreneur. And as McFarland and the festival got closer and closer to failure, King also ended up in way too deep.

He tells a story in the documentary about Bahamian customs holding the water they ordered for the festival until they paid $175K in fees. According to King, one day McFarland called him up and said, "You're our wonderful gay leader and we need you to go down [to customs]. Will you suck dick to fix this water problem?" King claimed he was prepared to do it, but the customs officer "couldn't have been nicer" and just said they needed to be paid.

King also told a story about fleeing the festival site when it failed and workers were angry because they hadn't been paid. It involved him trading clothes with someone, hiding "behind a urinal", and being picked up in a truck that he laid down in the back of.

Obviously, King went through a lot, but what about now? The documentary doesn't give any updates on his life, although he does say himself, "I definitely had a post-traumatic syndrome, like many of us did, for weeks and weeks. And a lot of it was a guilt feeling of, did I abandon everybody?"

As for work, it appears King is still running his event production company, Inward Point. King's LinkedIn shows that he co-founded the business in 2013. King doesn't seem to have public social media; Inward Point has a Twitter account, but the last post is from 2016. According to the Inward Point site, the "for-profit, purpose-driven" company is conscious of environmental sustainability in its event planning. More information about how Inward Point reduces waste at its events can be found in this story on the New York Makers blog.

King's bio on his company's site states, "Andy has spent the past 25 years helping top brands, foundations, and individuals market themselves, primarily through live events and experiential campaigns. He catered his first wedding at age 16 and went on to become a top event producer in New York City." Clients he's worked with over the years include PepsiCo, Disney, Goldman Sachs, Victoria's Secret, and Vogue.

His bio also notes that he authored a cookbook and has appeared on the Food Network and Animal Planet. For those interested, the cookbook was released in 1994 and is called Quick and Easy Menus for Entertaining: Secrets of a Savvy Cook. It's available on Amazon.