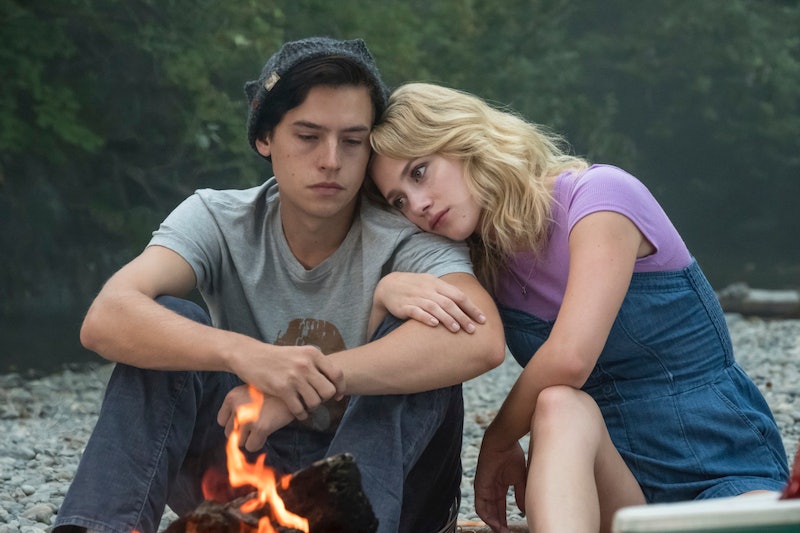 Spoilers ahead for Riverdale's Season 3 premiere. We may finally know the fate of Archie's court battle, but his impending trip to juvi is actually the least shocking turn of events in Riverdale's Season 3 premiere. In the final moments of the episode, a certain central blonde collapses and begins to seize. Because it comes after a drama-packed few minutes, what happened to Betty on Riverdale isn't entirely clear, but her fall is super concerning, and "the farm" might be to blame.

Questions about the mysterious group have been building ever since Polly invited Alice to join in the Season 2 finale. Like, who is its leader, Edgar Evernever? And perhaps more importantly, what even is it? Betty seems convinced that it's a cult, her mother and sister have been body snatched, and that Edgar is a weird guru not to be trusted. But Betty has also been hiding some dark secrets of her own: Apparently, she's been lying about going to therapy all summer and self-medicating with Adderall she obtained illegally.

In the final scene of the premiere, Betty comes home and hears chanting from the yard. Outside, some of the farm's members are gathered around a fire. Polly is holding one of her twins over the flames; Alice is holding the other. It's clearly some kind of ceremony. Then, it gets really weird. The Cooper women appear to drop the babies into the fire, but they suddenly bounce back into the air and float there. Betty, who's been watching from the balcony, falls to the ground shaking. It's difficult to articulate a reaction to that moment beyond, "Wait... what?!"

First of all, were those babies levitating? When Alice runs over to her convulsing daughter, she and Polly are not holding Juniper and Dagwood. So either they really did drop them, or they were never there in the first place. Archie was having dark visions, daydreams, and nightmares throughout the episode — maybe that's what happened? Or, if Betty abused her Adderall, could it be some kind of hallucination?

According to WebMD, Adderall usage can cause seizures in rare cases. But Betty also talked to Jughead about quitting the drug, and per American Addiction Centers, seizures are a symptom of withdrawal, too. WebMD also warns that mixing Adderall with other substances can cause seizures and hallucinations, which would explain the floating babies. Maybe someone tampered with Betty's medication, either to harm her (looking at you, Edgar, whoever you are) or to prove a point (looking at you, Polly and Alice). Whatever the case, it's certainly feasible that Betty's Adderrall played a part in this.

Then again, it's also possible this is somehow connected to the Gargoyle King and the role-playing game that may or may not have killed Dilton. How many cults moved into this freakin' town over the summer? This is spooky stuff. One might even say... Chilling... though executive producer Roberto Aquirre-Sasse told TVLine that Netflix's Chilling Adventures of Sabrina (and magic) won't cross over to Riverdale any time soon. So it's unlikely that someone put a spell on Betty. Drat.

Two things are clear: Betty is not well, and if she was barking up the wrong tree about the farm before, things won't let up for her any time soon. Riverdale is back, and the game is afoot!