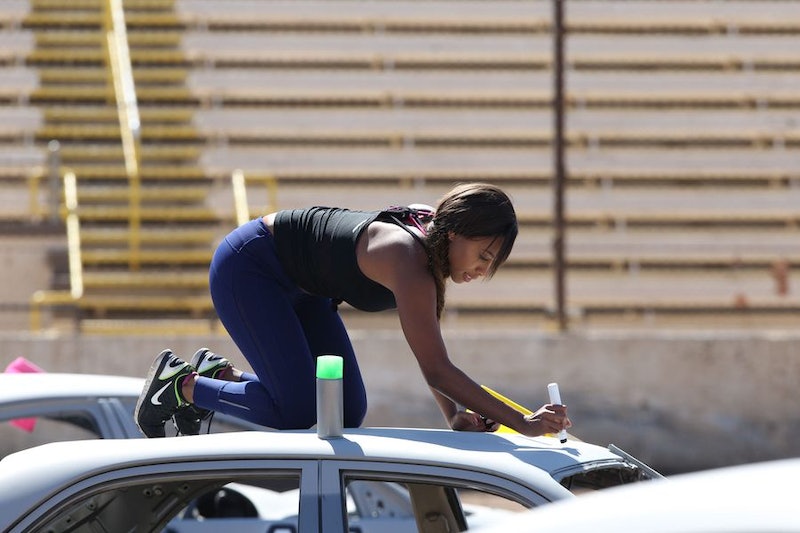 It was only a matter of time until The Bachelor (senior producer: Lindsay Liles) had Arie, a former race car driver, take the contestants on his season on a group date that involved cars. Fifteen women followed Arie to a pit to play a grown-up version of bumper cars (aka a demolition derby) in which they commandeered old jalopies to win cash and prizes. Well, OK, not that last part. It was just for fun. But it wasn’t all fun and games for one of the contestants — what happened to Brittany T. on The Bachelor? She had a little too much fun on the date and suffered a head injury because of it.

The whole point of a demolition derby is to smash your old, almost-broken-down car into other old, almost-broken-down cars in order to render them useless. If you’re the last car running, you win! This is a perfect date for Arie, the driver, and a perfect date to see which woman can jump in with both feet. The woman got to decorate their cars, too, which is a nice touch. I would have gone with a full leopard-print motif if I had the time. In any case, Brittany took the goal of the race to heart, and She. Was. On Fire. She was crashing into cars left and right, taking down competitors and crushing spirits. A woman after my own heart, really.

She didn’t win the competition — that honor went to Seinne — but Brittany went down fighting. Later, though, Brittany was complaining that she didn’t feel well, and it turns out that she suffered a concussion during the group date. According to the Mayo Clinic, symptoms of a concussion include headache, loss of consciousness, confusion, amnesia, dizziness, seeing stars, nausea, ringing in the years, vomiting, and fatigue — it’s not clear what symptoms Brittany was experiencing, but it was enough for her to get checked out by a medical professional and miss the party that followed the date! Bummer.

The following night at the rose ceremony, Brittany was feeling well enough to participate, and Arie awarded her with an award for being the most badass player in the game, which is pretty cool. She also got some time with Arie, which is even more valuable, as there are, like, 30 women vying for just a minute of his attention.

Though Brittany’s concussion was serious, it wasn’t even the most dramatic thing to happen during the demolition derby date. When the date was announced, Annaliese starting freaking out, and she soon revealed that she’s afraid of cars crashing because she was traumatized by a bumper car ride in her youth. There was even an Unsolved Mysteries-esque dramatization and circus music to go along Annaliese’s tearful sobs. Arie comforted her, and Annaliese got in that car… only to be nearly as raring-to-go as Brittany! Was this a ringer situation, or was Annaliese actually scared? Was she playing us all for a fool? Who knows? In the end, though, she definitely had a good time.

This rock 'em, sock 'em part of The Bachelor is a ton of fun, and if this is any indication as to what The Bachelor: Winter Games will be like, viewers are in for a real treat.

In terms of Arie and how this date will affect the rest of the season, I don't know that it will. All of the group dates on The Bachelor are supposed to show who is there to play and who is not, but at least now Arie knows which of these contestants can race with the big dogs in his former career. Vroom, vroom.