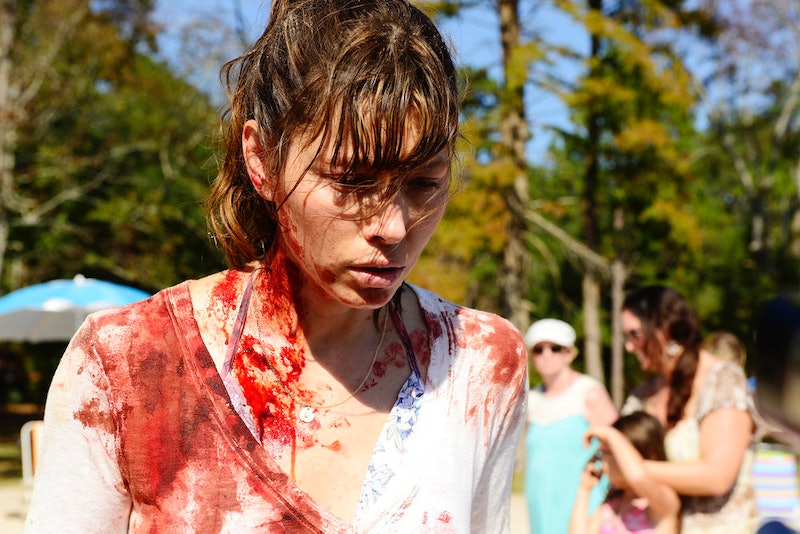 Although previews for The Sinner tried to act like Cora was just a simple suburban mom before she straight up murdered a man, the first episode showed that was far from the truth. And that makes sense since people usually don't go around stabbing other people in broad daylight — and in front of their toddlers no less! — if they don't have some truly deep-seated psychological issues. And the key to figuring out why Cora killed Frankie is to know what happened to Cora in the past because something traumatic had to happen to lead to this murder. With the mystery entirely being about the why, there's no way all the puzzle pieces will come together until later in the miniseries, but the first episode did provide some clues about what happened to Cora on The Sinner.

The information viewers have about Cora's life — especially her life before she was married to Mason — is pretty scant, but every flashback should be considered a clue about what led her to become a murderer. That means her childhood of growing up in a strict Catholic household with an unhinged mother and a sick sister definitely plays a part in who she is and perhaps even somehow directly influenced whatever experience turned her into the type of person capable of murder. This religious upbringing also has even more ominous undertones when you consider that Cora seems to have a complicated relationship with sex, as was demonstrated by her reluctance to sleep with Mason in the first episode.

While you could write off that Cora was tired or just wasn't feeling in the mood to have sex with her husband, this scene wasn't included in the first episode just as a random glimpse of their personal lives — it's an important component to the story. Plus, while you may be able to rationalize a person not wanting sex one night, that doesn't explain why she popped a pill and then was completely disengaged from the sexual experience with her seemingly loving husband. (Although I don't think Mason has anything to do with her disinterest — and perhaps, disdain — for having sex, I can criticize him for not being in tune with the wants of his wife.)

This sex scene, combined with the insinuation that she thought she was protecting Frankie's wife when she murdered him definitely implies a past of sexual abuse. Was she molested by her father, who gave her a kiss on the forehead, as a child? Or, more likely, was she raped when she was older while that song by Frankie's band was playing in the background? Considering her extreme reaction to the song, something utterly brutal may have been inflicted upon her while that song, or one like it, played. It seems extreme to say "torture," but Cora is clearly a tortured soul, so maybe she suffered some sort of perverse abuse at the hands of a man in the name of faith?

But while a man is probably to blame for what occurred to her, let's not forget the woman in the first episode who asked, "Are you coming?" The fact that this flashback was introduced at the very beginning of the series insinuates that a female was also present for this abuse and perhaps it was more of a planned torture than a random act of violence. The question also makes it seem like Cora may have made decisions that led her to be vulnerable to this abuse and that deep down she wrongly blames herself for what happened to her. After all, the show is called The Sinner and her strict Catholic upbringing surely led her to feel guilty for any perceived transgressions.

The theory that her abuse may have been on the elaborate side is backed up by Cora trying to drown herself — or at least contemplating it — before she murdered Frankie. With her being raised by a fanatical mother, her issues with sex, and her having no will to live, something deeply troubling has happened to her. It's so unconscionable that it seems to be an event that she can only relive in snippets in her mind — never seeing the full scope of what occurred to her. But as The Sinner continues, and Bill Pullman's detective keeps detecting, the complete horror of what occurred to her will be revealed before the series is through. So prepare yourself for the worst.

More like this
The ‘Squid Game’ Season 2 Renewal Teases A Creepy New Figure & A Return
By Brian Anthony Hernandez and Bustle Editors
Everything To Know About Jordan Peele's 'Nope'
By Alyssa Lapid, Morgan Leigh Davies and Radhika Menon
Everything We Know About When To Expect Money Heist: Korea Part 2
By Kadin Burnett
The Umbrella Academy Cast Breaks Down That Wild Season 3 Finale
By Gretchen Smail
Get Even More From Bustle — Sign Up For The Newsletter