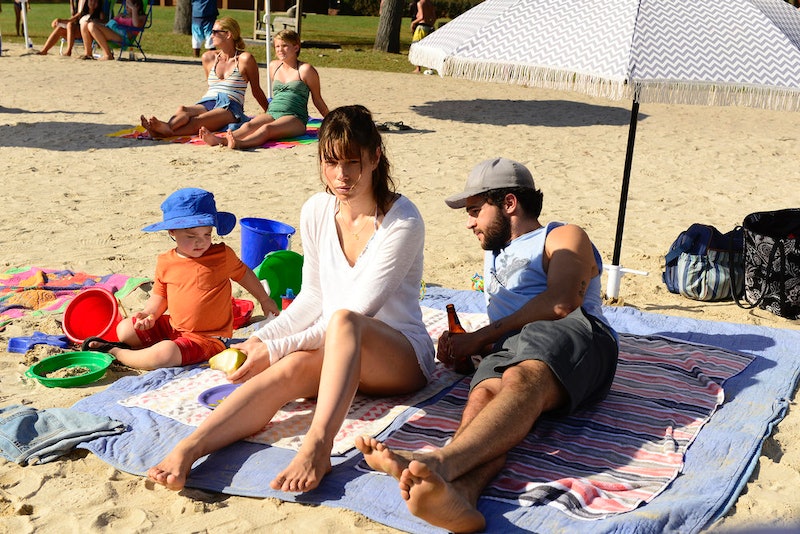 Within the first half of the Aug. 2 premiere of The Sinner (spoilers ahead) Jessica Biel's Cora commits a violent crime while spending the day at the lake with her family. And like Bill Pullman's Detective Harry Ambrose, you'll probably become fixated on finding out why Cora murders Frankie on The Sinner. That's actually the whole point of the eight-part USA miniseries, so don't expect too many answers right off the bat. However, there are clues from the first episode that give some insight into Cora's mental state and her past that might just provide a motive for the stabbing.

While you could spoil the entire miniseries for yourself by picking up an English translation of the German book by Petra Hammesfahr that the show is based on, you will probably want to wait and see how the story unfolds in the TV version after you watch the premiere. And while there are limited hints in the first episode, two things are certain: Child Cora had a strict, religious upbringing, and adult Cora appears to be carrying some emotional trauma. Those two facts may be the key to why she murders Frankie, because even if you don't believe Cora's claim that she never met him before (after all, his friend Patrick thinks Frankie might have recognized Cora), maybe the murder has less to do with the victim and more to do with what happened to her in the past.

Although Cora's life seems fairly normal in the present day, flashbacks show that she comes from a religious family and that her younger sister, Phoebe, was born incredibly sick. Her mother blames young Cora for Phoebe's illness, for some reason. The scene with Cora's mother toward the end of the episode is short, but haunting. And one can only imagine what a negative impact her mother's judgement and seeing this unhealthy baby would have on a young, impressionable girl. Of course, this flashback doesn't give any real insight into why Cora does what she does, but it's about the only major clue viewers are given about her life before she married Mason, so it's a jumping off point.

Other moments from the premiere also seem to hint at a past of sexual abuse. In a flashback, her father kisses a young Cora on her forehead and while it seems innocent enough, the focus on the kiss casts suspicion upon her father. In the present day, Cora is hesitant to engage in sexual intercourse with her husband and though she agrees, she takes sleeping pills beforehand and is disengaged during. And while she is certainly triggered by the specific song that is playing when she murders Frankie, Cora is also set off by the way Frankie touches his wife, Leah, on the beach. She yells, "Get off her!" before she stabs him. Mason even notes that Cora seems to have thought she was protecting or saving Leah. If Cora has experienced sexual violence in her life, it may help explain not only her attack on Frankie, but why she was contemplating drowning herself before the murder.

Another moment that makes no sense for viewers now, but could play a huge part later, is how the series opens. Although it is easy to forget with everything else that happens, after Cora is shown swimming in the beginning, the scene changes to a woman asking, "Are you coming?" in a doorway. Along with that, there's a pattern on the light fixture behind the woman that mirrors the wallpaper that seems to haunt Cora later. As her family's home is covered in bold wallpaper, perhaps she's having flashbacks of her earlier home life or to something else that occurred before the main events of The Sinner.

The theory that whatever happened to her in the past will help explain the murder has been backed up by the actor herself. Biel produced the series in addition to starring in it and is obviously passionate about her character. In an interview for USA, Biel said,

She does not want to get into her past. Her past is such a place of shame and of fear. She's living with these big secrets. She starts to realize that maybe there's more to the story than she even understands.

You can hear her discuss this at 1:43 in the below video.

"There's something that she's maybe battling with internally. The truth of her past is very complicated," Biel said in a different behind-the-scenes video for USA, which you can watch below. "We will uncover all of these things within her and it all really kind of wraps around what happened to her before she got to this point in her life."

Further proving the importance of Cora's past and the flashbacks is what the writer of the miniseries, Derek Simonds, said at the Tribeca Film Festival premiere. "The flashbacks become a growing piece of the show," he said, according to Entertainment Weekly. "They tell a story we follow throughout, and they become more and more significant."

The combination of the focus on her past and the title makes it seem that something horrendous was done to Cora in the name of religion. After all, the title "The Sinner" could come from the prayer, "Hail Mary," with the line, "Pray for us sinners, now and at the hour of our death." That line haunted this Catholic-raised writer at bedtime and it seems to have an eerie foreshadowing for Cora.

Exactly how Cora's past pushes her to murder Frankie hasn't been unveiled just yet. And whether she even comprehends why she has done what she has done isn't clear either. However, since The Sinner is a standalone miniseries, you'll be pleased to know that the answer to "why" will be given to viewers before the story is through.

More like this
All The Celebrity Relatives Revealed On 'Claim To Fame' So Far
By Brad Witter
Dr. Anna Pou Is Still Practicing Medicine After Facing Murder Charges
By Brad Witter
‘Stranger Things’ Stan Megan Thee Stallion Grilled Natalia Dyer About Nancy & Steve
By Brad Witter
Reese Witherspoon Got Hooked On ‘Never Have I Ever’ After Son Deacon’s Debut
By Stephanie Topacio Long
Get Even More From Bustle — Sign Up For The Newsletter