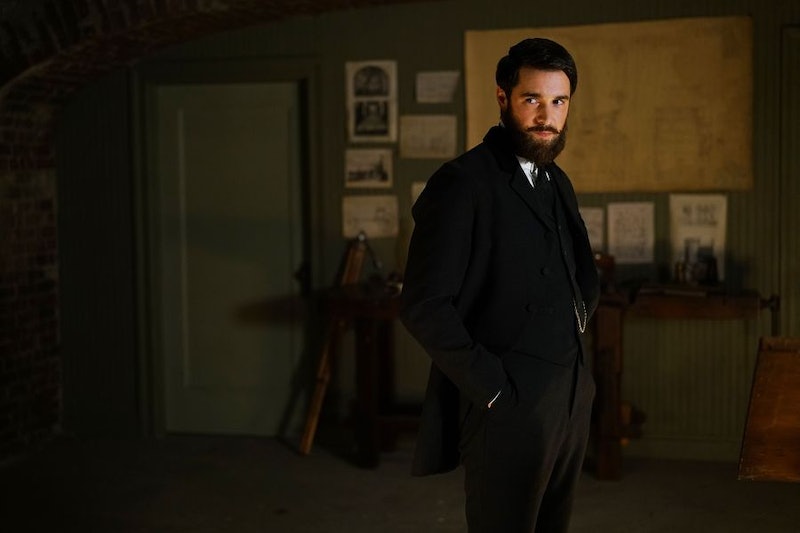 History is littered with unsolved mysteries that puzzle us to this day, from who built Stonehenge to who killed the Black Dahlia and what happened to D.B. Cooper. But one of the most enduring mysteries concerns an infamous British serial killer. What happened to Jack The Ripper in real life? That's exactly the question that new ABC series Time After Time sets out to answer. Despite countless theories, the identity of the prolific murderer was never officially uncovered, and eventually the murders stopped and faded into the stuff of legends. Was he ever caught? Did he die? Or could the answer be slightly more… fantastical?

According to the show created by Kevin Williamson (The Vampire Diaries, The Following), Jack The Ripper's reign of terror throughout 19th century London stopped because he time traveled into the 21st century. Yes, really. Time After Time is based on a 1979 novel by Karl Alexander (which also made into a movie that year starring Malcolm McDowell), and it imagines a version of history where Jack The Ripper was actually a surgeon named John Leslie Stevenson, and was friends with classic sci-fi author H.G. Wells. In this story, Wells actually invented a time machine, which Stevenson then used to evade the authorities by transporting himself into the future.

While Time After Time (starring UnREAL's Freddie Stroma as Wells and Revenge's Josh Bowman as Stevenson) provides an entertaining "alternative facts" theory about Jack The Ripper's fate, it's highly unlikely that the real killer skipped town inside a time machine. So what did happen to him? Well, that depends on who you ask… and how many murders you believe he committed. Technically, there are only a "canonical five" victims that can officially be traced back to the same serial killer, which occurred between August and November of 1888. But some people connect Jack to as many as 11 total slayings occurring all the way through 1891 — so theories on the murderer's fate vary just as widely.

According to the website for London's official Jack The Ripper Tour, one such theory is that the killer committed suicide; just as one suspect at the time did in November of 1888, after the "canonical five" slayings, but before the later killings. Another theory is that he was discovered to be insane — either by family members or by authorities without realizing his connection to the serial murders — and locked away in an asylum; which is exactly what happened to another couple of suspects in the case. Yet another is that he moved away from London but continued killing; and one suspect did relocate to New York shortly after the death of the final of the "canonical five."

There are more banal theories as well, including that Jack The Ripper simply got tired of killing, or that he passed away of natural causes. But former detective Trevor Marriott believes he's stumbled on the real answer. In 2013, on the 125th anniversary of the "canonical five" deaths, Marriott toured the UK with his one-man show titled Jack The Ripper: A 21st Century Investigation, in which he laid out his research and compelling theory: that the serial killer we all know as Jack The Ripper never actually existed.

According to Marriott (and as reported by The Daily Express), a German sailor named Carl Feigenbaum — who was arrested and executed in 1896 after committing a Ripper-like murder in New York — was responsible for some, but not all of the slayings attributed to history's most infamous serial killer. That black-caped villain, he says, was a fiction concocted by ambitious crime reporter Thomas Bulling. Marriott claims that Bulling, seeking fame and notoriety himself, forged the legendary "From Hell" letter and other correspondence presumably written by Jack The Ripper himself and sent to Scotland Yard.

"The reality is there was just a series of unsolved murders and they would have sunk into oblivion many years ago, but for a reporter called Thomas Bulling," Marriott claimed to the Express. "It was the most ingenious piece of journalism that has kept this mystery alive for 125 years," but there may not have been a real Jack The Ripper at all.

What do you believe? Did Jack The Ripper end his reign of terror with his own hand? Did he continue it in another, faraway city? Did he never exist at all? Or did he hop into a time machine and stumble into the busiest city of the modern world, where his grisly crimes could continue to go undetected? You can see the latter theory play out when Time After Time premieres on ABC this Sunday at 9:00 p.m. ET.