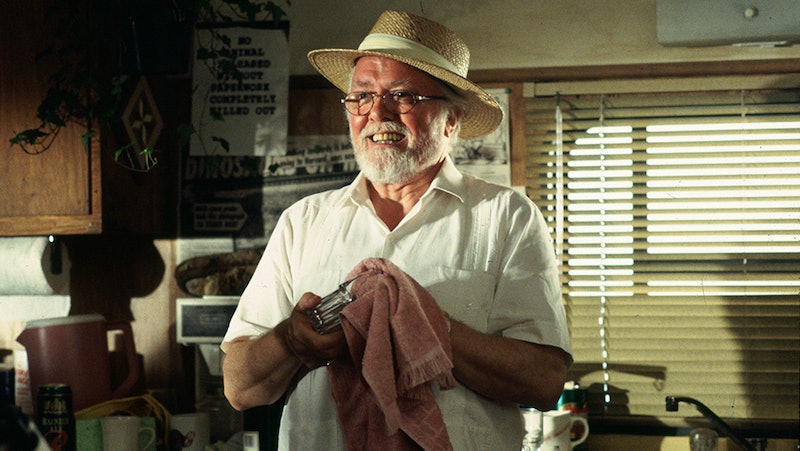 Hammond passed away before the events of Jurassic World. You can deduce this by reading between the lines in the film, since the Jurassic World park contains a statue of Hammond and he is mentioned in the past tense. Similarly, in Fallen Kingdom, a painting of Hammond is seen and he is again reflected on in the past tense. However, his death is never really directly addressed on screen. Hammond last appeared on film in 1997's The Lost World, the first sequel to Jurassic Park, where he was shown to be in failing health, but he didn't die. To actually find out what happened to him, you have to go outside the movies and look at the films' marketing efforts.

In 2014, as part of Jurassic World's viral marketing, a website went up that posed as the official site of the fictional Masrani Corporation; the company that owns the Jurassic World theme park. According to the site, Hammond died in 1997 in what must have been a short time after the events of The Lost World. That same year, Masrani began negotiations to acquire Hammond's company, InGen, and they completed their acquisition in 1998. The decision to retroactively kill off Hammond's character — he was not mentioned as being dead in 2001's Jurassic Park III — was likely caused by the real life failing health, and eventual death, of the actor who portrayed him, Richard Attenborough. Attenborough passed away from natural causes in 2014, just five days shy of his 91st birthday.

Several years prior to his death, Attenborough had expressed interest in returning to the franchise should a fourth film be made. Attenborough retired from acting in 2002, but in 2008 he was still willing to return to his old profession for one thing only: a new Jurassic Park film. "Obviously if Steven Spielberg asked me to do Jurassic Park IV then I would jump at doing that," he told Australian Broadcasting Company News' Rebekah van Druten. "But ... it's very hard work and it's very tiring." It appears that the statue of Hammond that appears in Jurassic World was included as a tribute to Attenborough, even though it was shot before he passed away. Director Colin Trevorrow tweeted a photo of the statue with the caption "In memoriam" on Aug. 25, 2014, one day after Attenborough passed away.

While both the actor Richard Attenborough and his character John Hammond have passed away, his presence are still felt in the Jurassic World universe. Without the research Hammond funded in the '90s, there would be no dinosaurs in Jurassic World. And if there's no dinosaurs, there's no franchise. Therefore, it's no wonder that his legend continues to live on in Jurassic World: Fallen Kingdom through references made by other characters — and he'll probably be mentioned or alluded to in the next Jurassic World film when it arrives in 2021.

As for other legendary Jurassic Park characters, like Laura Dern's Ellie Sattler or Sam Neill's Alan Grant, they've yet to appear or even be mentioned in either Jurassic World film. Maybe they'll show up in Jurassic World 3, but for now, the memory of John Hammond is serving as a more than adequate bridge between the two franchises.