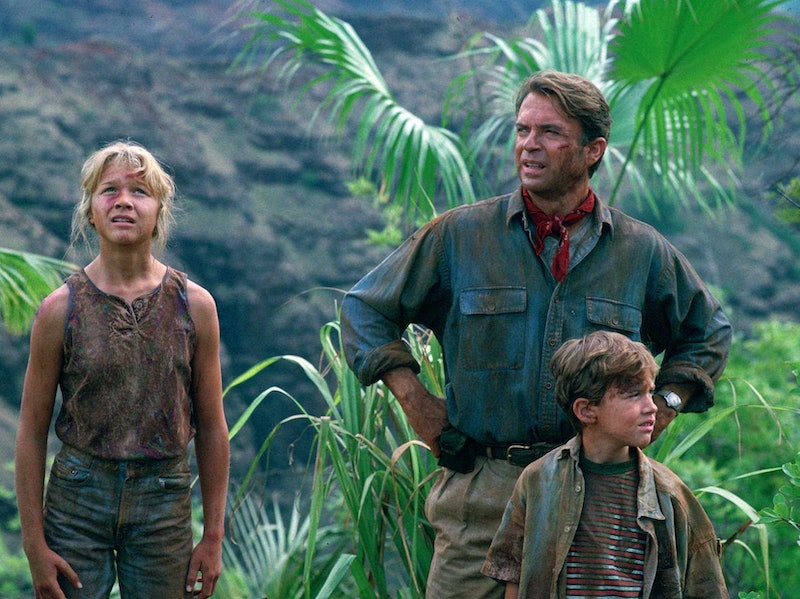 Last year, Jurassic World set box office records and reminded people of a movie that came out over 20 years ago called Jurassic Park. It was as if everyone had forgotten what a big deal Jurassic Park was, even though it was the highest-grossing film of all time when it debuted in 1993. But if you're anything like me, Jurassic Park has never been far from your memory. For me, it's the type of film that stays with a person. The type of movie that I can watch over and over again and never tire of. To be honest, I don't think I'll ever stop watching Jurassic Park .

I remember when the movie first came out and what a huge deal it was, not just for me, an eight-year-old kid who was obsessed with dinosaurs, but for seemingly everyone on the planet. I remember adult relatives of mine remarking how scary it was, and how I bravely scoffed at that notion. This movie wasn't scary, this movie was amazing. I remember seeing a picture of the sick triceratops in a magazine before the film came out, and being utterly convinced that an actual dinosaur had been discovered. No movie has had that kind of effect on me since, and I doubt one ever will, so here are some of the reasons why I will always love watching Jurassic Park .

When I watch Jurassic Park, even today, I am immediately transformed into that dinosaur-loving little kid completely transfixed by what I'm watching on the screen. It's not often in my hectic day-to-day life of writing listicles and paying bills that I'm able to feel like I'm eight years old, so I'll take that chance whenever I can. Even if it's just for 127 minutes.

2. It Makes Me Believe The Impossible

When watching Jurassic Park today, even with all the articles I've read debunking the science of it, I still think: "Yep, this could happen." It's a testament to how well the movie is made that has me believing that one day I could visit a real life Jurassic Park, and that's a feeling I never want to lose.

3. It Fills Me With Nostalgia

Not to be confused with making me feel like a kid again, the movie also brings back very specific memories from my childhood. When I was ten, my family took a vacation to California and visited Universal Studios. I rode Jurassic Park: The Ride, and every time I've watched the movie since then I am able to once again smell the particular mist that was sprayed in the air during the ride. Seriously, it's like magic, and gives me a warm fuzzy feeling that I can count on again and again.

4. Its Effects Still Hold Up

You'd think that a special effects-dependent movie would be hindered by looking dated twenty years after its release, but Jurassic Park looks as good to me now as it did in '93. The key was the mix of CGI and animatronic puppets used in the film, a feat that has never been as successfully duplicated and the reason why the effects in this movie look more realistic than in the far more technologically-advanced Jurassic World.

5. It Has Strong Female Characters

It's kind of sad that Jurassic Park's female characters were so much better realized than Jurassic World's 22 years later. Has society really regressed? In any case, Jurassic Park doesn't feature damsels in distress. It features Dr. Ellie Satler kicking ass and rolling her eyes at John Hammond when he suggests he should go on a dangerous solo mission because he's a man, and it also has teenager Lex Murphy saving the day, by herself, by getting the park's security system back online. And all this without a high heel in sight!

6. It Reminds Me That Blockbusters Don't Need To Suck

Too often these days it seems like blockbuster movies are nothing more than two hour CGI-filled explosion factories that eschew story in favor of spectacle in order to maximize their profits overseas where the dialogue risks being lost in translation. Jurassic Park did not do that. It has loads of spectacle (coherent spectacle, not noise-filled, fast-moving Transformers garbage) while also throwing out some big themes about humans' role in our world and how much control we really have over nature.

I know I was just railing against spectacle, but I'm not opposed to spectacle when it's good. And when it's great, there's nothing better. Seeing the raptors stalk the kids in a kitchen, the T-Rex chase a Jeep and being "closer than he appears" in the side mirror, and the dilophosaurus spit poison in the face of Newman from Seinfeld are thrills that never get boring.

8. It's Peak Spielberg And Williams

When director Steven Spielberg and composer John Williams team up, good things happen. Jaws. E.T. Indiana Jones. All of these are great films with immediately recognizable theme songs. But for me, both men were at the top of their game when they came together for Jurassic Park. Spielberg had never delivered bigger thrills (and still hasn't) and Williams had never written a more fitting theme (well, maybe Star Wars). Pure magic.

9. It Hasn't Been Tainted

A lot of films have been deemed perfectly acceptable at the time of their release only to be frowned upon in later years due to increased cultural sensitivity (just watch the "What Makes the Red Man Red" scene in Peter Pan and try not to cringe). But Jurassic Park has no such faux pas. It's just as acceptable today as it was when it came out, even to the most easily-offended eyes.

Jurassic Park will always be one of my favorite movies, and I can't imagine a time when I won't want to view it. If I make it to the year 2093, I'm guessing the first thing I'll want to do (after putting on my anti-gravity suit and taking my daily food pill) is pop in a holographic version of Jurassic Park to celebrate its 100th anniversary. And it will be just as good then as it was the first time I watched it all those years ago.