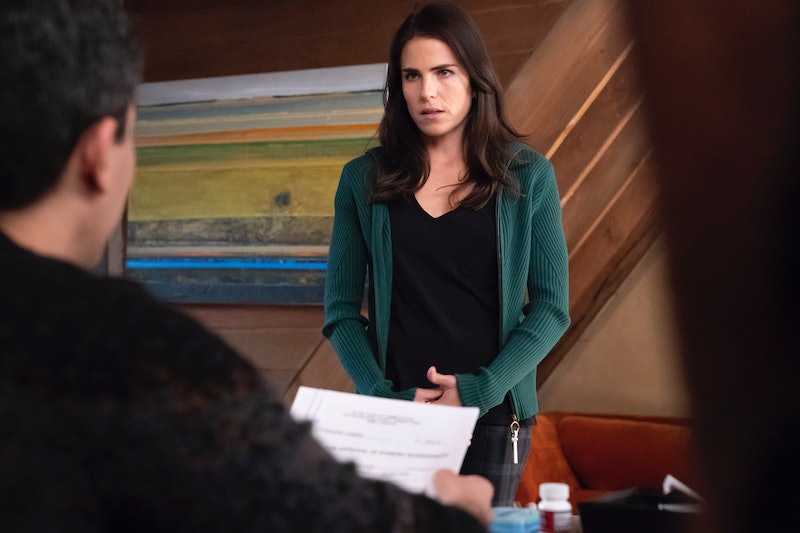 As ever, How to Get Away with Murder's Season 5 finale left fans with more questions than answers. Fans are no closer to knowing, for example, who Bonnie's son is, or who Michaela's parents really are, or whether Connor's mom and Asher will meet again, but there's a much more pressing mystery to solve now. Like, um, what happened to Laurel on HTGAWM at the end of the finale? It looks like she and her son might have been kidnapped.

Given the Castillo family history, it makes sense for fans to think that Laurel's relatives could be behind her sudden disappearance. Fans will remember that Laurel was kidnapped when she was a teenager. But she eventually lied in court about it to protect her dad, saying she'd faked the kidnapping. Jorge didn't show a ton of concern for his daughter back then, so it's totally possible that he and Laurel's brother, Xavier, are behind her new disappearance.

Jorge is in jail, but he could still have ways of setting his plans into place. Plus, there's the fact that Jorge tried to take custody of Christopher when the baby was first born. And now, Christopher has vanished, along with Laurel. It would be pretty dark if Jorge and Xavier abducted their own family members, but there's really nothing that would be too much for them at this point. (After all, Xavier might be responsible for his own mom's apparent scalping.)

Laurel's disappearance comes right after she and Annalise travel to New York to track Xavier down. Their meeting doesn't lead to many answers, but it's likely that he was expecting their visit. And even though they'd parted ways with him, Xavier could easily have followed them outside and snatched Laurel while Annalise was distracted by a phone call.

The biggest question now is why Jorge and/or Xavier would want to kidnap Laurel and Christopher. She's made it pretty clear that she doesn't want anything to do with her family's criminal ways. If the two of them want something from her (or from Annalise), it doesn't seem likely that Laurel would do anything to help them, even if she's under the duress of being kidnapped.

There is one other option, though. It's possible that Laurel faked the kidnapping (in reality this time), because of the growing tension between her and the rest of the group. After Michaela learns that Laurel talked to FBI Agent Telesco, and that Telesco offered her a deal, they're skeptical of the new mom's intentions. If Laurel had someone helping her get Christopher out of the house, she could have gone into hiding somewhere, away from her father and from the other students.

That's still a pretty big stretch, though, especially after Laurel's conversation with Connor and Oliver. Would she really have asked the newlyweds to be Christopher's guardians in the case of an emergency, if she was just planning to go into hiding? (Then again, it would be a great way to cover her tracks.)

Hopefully, this is one HTGAWM mystery that won't take an entire season to solve. Wherever Laurel and Christopher are, let's just hope they're safe and are being cared for.

More like this
Glenda Cleveland Died 2 Decades After Trying To Turn In Neighbor Jeffery Dahmer
By Brad Witter
Paul Mescal, Man Of Mystery
By Samantha Leach and Heather Hazzan
Mike Flanagan Teases 'The Midnight Club' In This Exclusive, Creepy Clip
By Grace Wehniainen
'Grey's Anatomy's New Intern Got Advice From Dr. Bailey Herself
By Grace Wehniainen
Get Even More From Bustle — Sign Up For The Newsletter