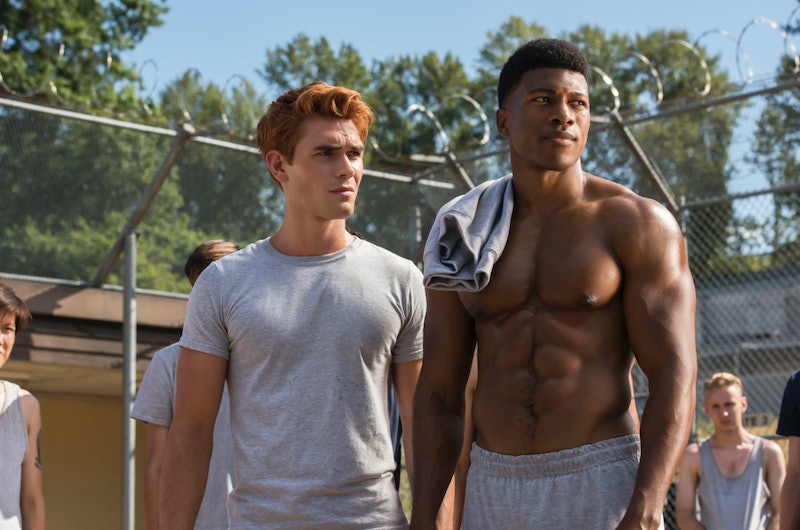 Archie may have been one of the the star students at Riverdale High, but it looked like he would have to do some major adjusting when he rolled up to Leopold and Loeb Detention Center. He immediately got off to a rough start, and though he did manage to get everyone to stop trying to kill each other for a brief game of football, things took yet another turn when his new roommate Mad Dog mysteriously went missing. The guards say he died, but the whole thing seems mighty suspicious, so what really happened to Mad Dog? Is he really gone for good, or could we be seeing him again later this season?

First, let's back up a little. If it weren't for the corrupt warden and the pesky intrusions of Hiram Lodge, Archie's stay at Leopold and Loeb probably would have gone rather smoothly. He had only been there for a few days before convincing the entire prison population to put aside their violence and toss the old pigskin around — a reminder that they're still just kids, and there's a way to make the best of their circumstances. However, it turned into an all-out riot after the warden ordered the guards to beat up all of the inmates, leaving one prisoner supposedly dead. Upon returning to his cell, Archie discovered that all of Mad Dog's stuff was gone, and a guard informed him that Mad Dog died in the riot — except Mad Dog wasn't even there. How can someone die in a riot they weren't a part of?

Chances are that Mad Dog is gone for good, but certainly not because of the way Leopold and Loeb's higher-ups are pretending. Now that the warden has proven to be nefarious enough to unleash violence on an entire yard of teens for playing a harmless game, it's not hard to imaged that he himself carried out, or at least called for, the murder of Mad Dog.

What's more, the warden came to Archie the night after Mad Dog's disappearance and declared he was the "new" Mad Dog, suggesting that Mad Dog had been running favors for him, or was in some way under his thumb. Having previously worked under Hiram's tutelage in Season 2, Archie is no stranger to working for criminals, but the warden may be be just a shade too evil for Archie to associate himself with. Then again, in a town that is being haunted by a towering monstrosity called The Gargoyle King, what really is evil, anyway?

We've yet to see Mad Dog's body, so until then, the door is still open — he could be alive. Perhaps Mad Dog cut a deal with the warden to get released early, or maybe he somehow escaped and the prison is just trying to cover it up. Whatever the truth is, the warden should know that if there's a secret being kept somewhere near Archie Andrews, then it's not going to be staying a secret for very long.