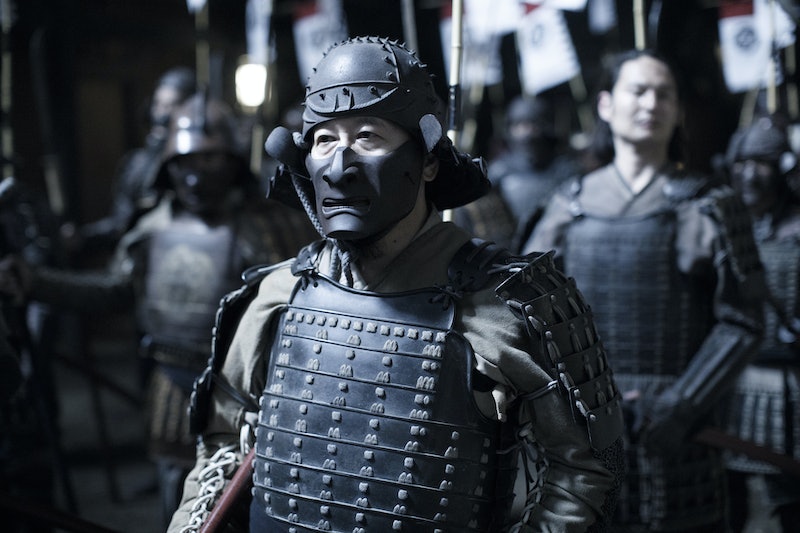 Spoilers ahead for the "Akane No Mai" episode of Westworld. Although there are plenty of shows on television these days about superheroes and their prodigious powers, HBO's sci-fi/Western series didn't seem to be one of them… until now. What is Maeve's "new voice" on Westworld, and how does it work? The former Mariposa madam discovers what is essentially her own superpower in the May 20 episode, "Akane No Mai," while traveling through the adjacent Delos park of Shogun World. How her new abilities will shape the future of Westworld is anybody's guess.

Viewers will remember that, during Maeve's Season 1 jailbreak, one of the alterations she had programmers Felix and Sylvester make to her code was the ability to control other hosts through voice commands — the same way humans are able to activate "analysis" or "sleep" mode in the hosts through verbal cues, although even more wide-ranging. But her ability has started to run into snags in Season 2: first, it didn't work on the members of the Ghost Nation she and Hector and Lee encountered by the river, and it's proven ineffective once again when wielded against the samurai who kidnaps them in the forest.

Fortunately, this is one mystery that has a quick and simple solution. As Lee informs her, Maeve is simply speaking the wrong language. Apparently not all hosts understand English, and they are impervious to voice commands in anything other than their own native tongue.

Unfortunately, despite being re-coded to understand and speak Japanese, Maeve doesn't have time to order her ninja attacker to stop trying to kill her before he has his hands around her throat, choking off her words. That could have been the end for Maeve — if it weren't for her newfound power. She stares calmly and directly at the ninja until he abruptly stops strangling her and kills himself by thrusting his head onto a spike. (Nasty stuff.)

"He took one look at you and self-impaled," a bemused Lee tells Maeve after the attack. "That was no voice command." Her badass reply? "I think I'm finding a new voice."

This new voice comes in handy again later in the episode, after her counterpart Akane assassinates the Shogun for murdering her surrogate daughter Sakura. As Maeve and Akane are about to be executed, Maeve once again uses her "new voice" to order all of the Shogun's men to turn on each other. This time, her power doesn't even involve staring into a host's eyes; apparently all Maeve has to do is think hard enough to make her will become reality.

It's obviously supposed to be a mystery how Maeve can suddenly control other hosts just by thinking; but the show may already have laid the groundwork for the eventual answer. Back in the Season 2 premiere, Bernard helped Charlotte track down Peter Abernathy by utilizing a hitherto unmentioned tool called the host mesh network. According to Bernard, all hosts are subconsciously linked by a peer-to-peer network — much like wifi routers — that allow them to share data and steer clear of each other within the park, thereby preventing different narratives from colliding in unexpected and messy ways.

Has Maeve somehow evolved to the point where she can tap into the mesh network at will and deliver commands directly into the subconsciousnesses of nearby hosts? If so, that essentially makes her the godlike figure in the bicameral mind theory, hijacking other hosts' internal monologues and replacing them with her own commands.

With this newfound power, she would certainly come in handy for Dolores' rebellion. Maeve didn't initially seem interested in joining that fight… but by the end of this episode, the former madam has racked up as much of a body count as the rancher's daughter. It's ironic that, as Maeve continues to gain her own free will, she may end up taking away the free will of any hosts that stand in her way.