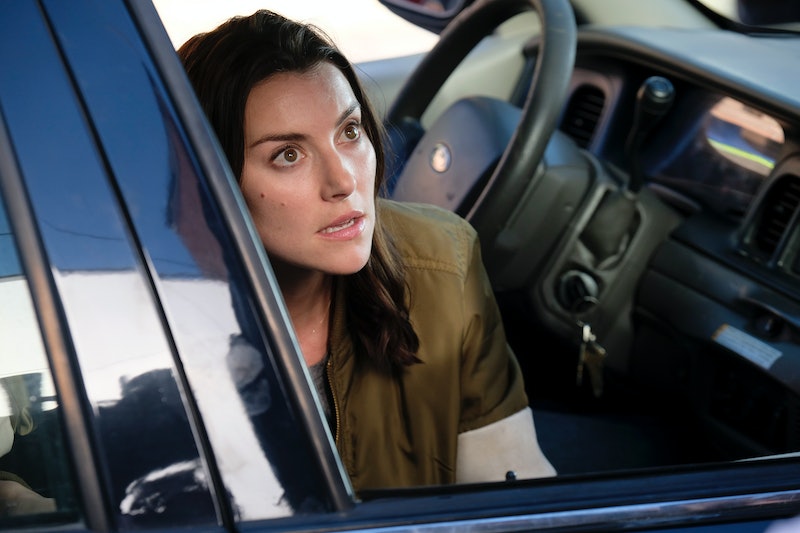 Major spoilers ahead for the “Colony Collapse” episode of Cloak & Dagger. The final showdown between the teenage heroes and their enemies led to an explosive August 2 season finale. Tyrone (Aubrey Joseph) and O’Reilly (Emma Lahana) face Connors (J.D. Evermore) after being arrested and Tandy (Olivia Holt) teams up with Mina Hess (Ally Maki) to prevent several oil rig explosions from flooding the city with murderers. There's also the question of which member of this “divine pairing” would die to save New Orleans. In the end, Tyrone and Tandy are triumphant, but O’Reilly meets a grisly fate. She's gunned down by Connors, but the episode’s final scene reveals that her story is far from over. So what happened to O’Reilly and what’s next for her character? She was a trusted friend but now she’s on her way to becoming a terrifying foe.

In this episode, Tyrone is still on the run from the police after being accused of murdering Fuchs (Lane Miller). Meanwhile, Tandy prevents two “terrors," aka the murderous people who became violently unhinged at the original oil rig explosion, from killing Mina after one of her valves exploded the previous night. Mina reveals that there are nine more valves on the brink of explosion and they head off to Roxxon for answers.

Tyrone tries to blend in during Mardi Gras, but he is soon spotted by the cops. O’Reilly shows up to help him escape, but they are cornered by several officers. Tyrone refuses to teleport in front of a crowd, which leads to their arrest.

It’s obvious that Connors is behind this arrest because they are held in a back-storage room instead of an official holding cell. O’Reilly tries to get Tyrone to teleport, but he says he can only do it when he is in peril or with his cloak.

Tyrone makes an emotional plea to the officer guarding them in hopes that he will help them escape:

“My name is Tyrone, my parents pay taxes, and it’s your job to protect me,” he says. “If you’re really 504, you would know that. I got a mom worried sick about me and a dad ready to take on the world to protect me. I bet your parents would do the same. Listen, I get you’re afraid. We all are. Most of the time we have a good reason to be. But, right now, I need you to find a reason to be just. To protect us.”

Tyrone's appeal almost works. But Connors appears and, like a true villain, tells them his entire plan. He will get away with their murders by claiming that Tyrone got free and killed O’Reilly, so he had to react and kill Tyrone. Connors starts leading them toward the front door when a terror bursts through the glass and starts attacking the officers.

Tyrone recognizes this from Ivan’s mind and instructs O’Reilly to keep her hands off of any infected people. As chaos ensues, O’Reilly helps Tyrone get out of his handcuffs and locate his cloak. He uses his cloak to lure all the terrors into a locked room. Unfortunately, they rip his cloak to shreds, but not before he can teleport to rescue Tandy.

During her mission with Mina, Tandy confronts Scarborough and uses his hopes to lure him into the same door seen in Ivan’s mind, which puts him in a catatonic state. Unfortunately, Tandy and Mina soon run into several terrors on their way to stop the explosions.

They hide in a building but Mina accidentally touches one of the terrors and becomes infected with the deadly adrenaline. Tandy whips out a dagger and dreads having to kill her, but Tyrone saves the day by using a taser to subdue Mina. It's not clear if she ends up dying, but hopefully she somehow returned to normal by the end of the episode.

Tyrone and Tandy retreat to the church to wallow in their defeat. Tyrone believes he has no power without his cloak and Tandy is not sure how to go on without Mina’s help. The pair are confronted by Evita (Noëlle Renée Bercy), who tells them that they have to save the city but one of them will die.

Tandy is understandably not thrilled about the prospect of dying, but Tyrone feels like their journey has been leading up to this moment. She tells Tyrone that he's powerful without his cloak, but she gives him Billy’s (Marqus Clae) hoodie from the night of the accident. The hoodie gives Tyrone the emotional strength and motivation to stand with Tandy in this fight.

The divine pair rushes to a rig, but they are cut off by dozens of terrors. They begin to use their powers to fight as O’Reilly shoots from the rooftop. She returns back to her truck near a Roxxon valve and is surprised by Connors, who shoots her several times and causes an energy explosion. He kicks O’Reilly's body into the water below and heads off to confront Tyrone.

Connors threatens to shoot Tandy in front of Tyrone, but he's messing with the wrong kids. Tandy puts a dagger to his throat, but Tyrone's cloak delivers dark justice to Connors by completely enveloping him until he disappears. In the comics, Cloak could entrap enemies in a dark dimension with his cloak until they die, so this means Connors is probably experiencing a slow (and scary) death. It’s what he deserves, to be honest.

Tyrone is willing to sacrifice himself to shut down a valve, but Tandy says they will die together to save the world. They join hands and create a powerful energy that returns everything to normal. Roxxon is found responsible for the original accident and Tandy moves back home so Tyrone can have a safe space in the church. All is (mostly) well and the pair might actually get along from now on.

Tyrone likely assumes that O'Reilly is dead or missing, but she's closer than he could imagine. The final scene shows O’Reilly crawling out of the water in a jerky, fast motion. As she turns to look at the camera, her eyes have an ominous glow. O’Reilly is definitely not a normal human anymore, but what does her future hold? The answers lie in her comic book arc.

According to Marvel, the comic version of O’Reilly was poisoned with gas and killed by a crooked cop. She was later reborn as Mayhem, a clawed vigilante with green skin that emits gas used to paralyze and hypnotize her enemies. Mayhem was Cloak and Dagger's ally whose primary focus was exacting revenge on corrupt police officers.

The introduction of mayhem was confirmed in Cloak & Dagger's Season 2 announcement video, which promises that the season will be “mayhem.” Showrunner Joe Pokaski recently talked about O’Reilly’s transformation to Mayhem and revealed that her character will deviate from the comics in an interesting way. He specifically referred to Mayhem as a villain (as opposed to a vigilante or anti-hero), saying Season 1 told her origin story in a clever way, per a Den of Geek report. He also said she is what people wish they could be if they didn’t have to live by rules or face consequences.

It will be interesting to see the dynamic between Mayhem and Tyrone when Season 2 drops in spring 2019. Perhaps Mayhem does not remember her relationship with Tyrone at all after being reborn and she starts indiscriminately wreaking havoc on the entire city. Or, perhaps Tyrone will see her as a villain because they have a Daredevil/Punisher type of relationship where they have opposing views on how to seek justice. Mayhem may even cause trouble between Tyrone and Tandy if she encourages Tyrone to dive dangerously deep into his dark side. Either way, it will be thrilling to see this comic character come to life on Cloak & Dagger when the series returns.