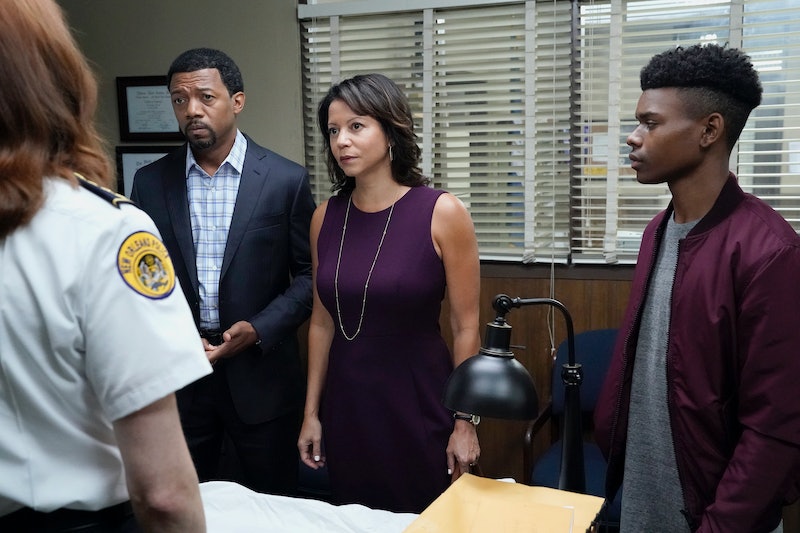 Major spoilers ahead for the “Back Breaker” episode of Cloak & Dagger. Tyrone (Aubrey Joseph) and Tandy (Olivia Holt) are brewing with rage, fear, and despair in the July 26 episode of the Marvel series. Tyrone deals with the unexpected aftermath of Connor’s (J.D. Evermore) arrest while Tandy's anger causes her to use her powers on others in a cruel way. The episode ends with a shocking cliffhanger as Tyrone’s house is surrounded by police officers coming to arrest him for Fuchs’ (Lane Miller) murder. Of course, he has been framed, but will Tyrone go to jail for this crime? Connors’ quest for revenge against Tyrone and Detective O’Reilly (Emma Lahana) is becoming increasingly perilous.

The episode starts with O’Reilly crying on the floor at Fuchs’ apartment shortly after discovering his body at the end of the previous episode. She is quickly (and suspiciously) ushered away from the crime scene after discovering a murder weapon. Meanwhile, Tyrone and his parents are at the police station to discuss the investigation steps following Connor's arrest.

Tyrone is shocked and angered by his parents’ nonchalant response to the impending investigation. He wants them to apologize to him for not believing the truth about Billy’s (Marqus Clae) death, but the conversation escalates to an argument and causes emotional distance in their family.

Tyrone withdraws from everyone, including his concerned girlfriend Evita (Noëlle Renée Bercy). His pent-up anger and frustration hits a boiling point when he accidentally bumps into a student who previously assaulted him in the school hallway. Tyrone throws the boy to the ground and beats him until he is restrained by a teacher.

He's sent to see Father Delgado (Jaime Zevallos), who makes him hold heavy books in the palm of his hands until he decides to talk. Delgado believes Tyrone is still fighting an internal battle in a war that is over. “Since the night Billy died you have been fighting to keep your anger in check, to control your pain” said Delgado. “The war is over but the battle still rages. Who is gonna die in that one?” Tyrone confirms Delgado’s words by admitting that nothing has gotten better even though he got the confession from Connors. Delgado says Tyrone’s cannot improve until he stops defining himself by the worst thing that has ever happened in his life.

Predictably, Tyrone lashes out and accuses Father Delgado of hiding behind religion so he really doesn’t have to feel anything. Tyrone says God has no answers for him because he nonexistent — a bold statement to make at a faith-based academy. Father Delgado blocks Tyrone as he tries to leave but Tyrone throws a punch at the priest. He misses wildly and Father Delgado puts him in a headlock to de-escalate the situation. It was a heart-racing moment, but years of trauma had turned him into a ticking time bomb that was bound to explode.

Tyrone steps into the priest’s fears and discovered his darkest secret. He spots a bloodied soccer ball on the ground as Father Delgado drinks a bottle of alcohol in a car with a busted windshield. This scene suggests that Father Delgado’s drinking (which he still secretly does) and driving caused him to kill a child in the past.

Tyrone is unsurprisingly interrupted by Tandy, who is meddling in the dreams of her ex-partner Liam (Carl Lundstedt). She has been using her powers to consume the hopes of almost anyone she encounters (including Mina Hess) because she discovered that her father abused her mom. In the Cloak and Dagger comics, Tyrone/Cloak would consume other’s life force and drain them but Tandy is using this trait in the TV show. Tyrone chastises her before he is released by Father Delgado, to whom he offers a sincere apology.

In the meantime, O’Reilly is drinking her pain away at a local bar when Connors makes a surprise appearance. He does a toast with other officers to her deceased boyfriend Fuchs, whom he likely had murdered because of Tyrone’s confession scheme. O’Reilly hits Connors over the head and he brutally beats her in front of cops who remain silent and refuse to help.

Connors taunts O'Reilly and threatens to get revenge. “How’s your little quest for justice feeling now New York?” Connors said. “Did you really think your inadmissible YouTube videos would keep me behind bars? Don’t stay down [on the floor] too long…you and me ain’t finished yet.” Connors may lie about many things, but he does not make empty threats. O’Reilly and Tyrone are at the top of his hit list and this won’t end well.

Tyrone’s troubles are further complicated when he has another heated argument with Tandy. She interrupts his conversation with Evita and angrily tells him to “stay out of her head.” When Evita intervenes, Tandy tries to steal her hopes but gets a surprise in return.

Evita yells “NO!” in the hope dream and forces Tandy to let go. She concludes that Tandy is Tyrone’s divine partner and runs away, which angers Tyrone. He calls Tandy out for using her powers to hurt others and says he does not need her drama in his life. And, honestly, no one can blame him for not wanting to deal with Tandy’s messy behavior.

Later that night, Tyrone finally has a productive conversation with his mom (Gloria Reuben). She admits she wanted to believe him about Billy’s death, but she knew if it was true that it could cause her to lose both of her sons, saying:

“If you were telling the truth, then that meant a cop murdered a teenage boy and covered up the crime. And the only way to do that means that he had help doing it. A lot of help. And that cop gets nervous and he decides he needs to tie up loose ends. What happens to that little boy whose the only living witness to what he did?”

She’s concerned about Tyrone putting himself into Connors path again. And, her worries quickly come to fruition when their conversation is interrupted by blue lights flashing in the windows. A voice on a loudspeaker asks Tyrone to surrender for the death of Officer Fuchs. His mother tells him to run and Tyrone is last seen escaping out of a back window, where he likely teleported to another location.

This terrifying ending leads to a lot of questions. Tyrone’s mom is alone in the house with the police slamming through the front door. Obviously, these officers were sent by Connors, so her life is in danger. What will they do to Mrs. Johnson? They could hold her hostage and use her as bait against Tyrone. Or, they may do the unthinkable by killing her and covering up yet another murder. As a matter of fact, anyone associated with Tyrone is now a potential target, including Evita.

Tyrone is on the run now, but where will he go? He can't return to school because he is a fugitive and his home might be under constant surveillance. Tyrone can teleport to these places, but he won't be safe for long. His only place of refuge will be with Tandy so they can combine powers to fight their foes. They are angry with each other, but they will reconcile according to a Comic-Con season finale trailer that shows them working as a team. This penultimate episode raised the stakes for the divine pair and set the stage for an explosive season finale.