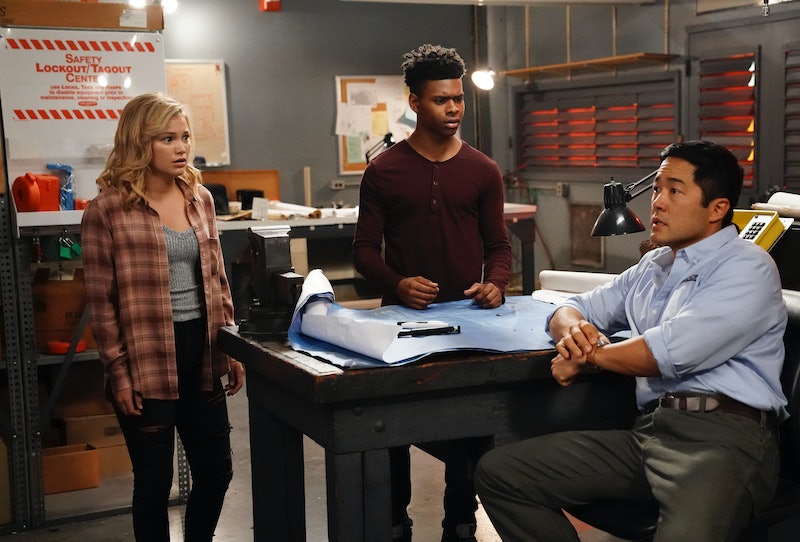 Major spoilers ahead for the "Lotus Eaters" episode of Cloak & Dagger. Tandy (Olivia Holt) and Tyrone (Aubrey Joseph) finally got a chance to combine their powers during the July 12 episode of the Marvel series. Tyrone is still reeling from witnessing the shooting death of his brother’s (Marqus Clae) friend Duane (Dalon J. Holland), but he has little time to grieve after Tandy asks for his help. She previously discovered a locked door in the mind of Ivan Hess (Tim Kang), the sole survivor of the oil rigging accident, but it is surrounded with darkness and fear. Tyrone’s powers open the door, which traps them in a dangerous time loop. In the end, they are able to free Ivan from his real-life catatonic state but he may have just become a Roxxon target. Will Roxxon kill Ivan Hess or can Tyrone and Tandy keep him safe from harm? Ivan knows the company’s sordid secrets and Roxxon will do anything to cover its tracks.

Episode 7 starts off with a flashback to Ivan and Mina Hess (Ally Maki) on the morning of the oil rigging accident. Mina sends her dad to work with a homemade cookie and tells him to figure out the secret ingredient. It’s a callback to a previous episode when Mina made the same cookie for Tandy and said she used cardamom to make the perfect sweet treat.

Ivan arrives at the oil rig and is angry when he finds out that shielding tiles were never installed at the site. He says he needs to talk to Tandy’s father Nathan Bowen (Andy Dylan) to fix the situation, but everything quickly goes awry when the first of two explosions take place.

In the present, Tyrone reluctantly agrees to help Tandy open the door she saw in Ivan’s head. They touch him simultaneously and soon find themselves on the oil rig. The superhero pair’s powers quickly come into play when they encounter Roxxon employees who are on murderous rampage. They run into Ivan Hess, who is thrilled to see new faces in his endless nightmare. Ivan doesn’t remember his name, daughter, occupation, or what happened prior to the accident because his mind is stuck on a continuous time loop leading up to the explosion.

Tyrone and Tandy attempt to follow Ivan’s instructions on how to stop the explosion, but they run into more killer employees. Tandy’s dagger-throwing skills and Tyrone’s hand-to-hand combat prowess combined with his teleporting ability keep them alive, but the explosion happens anyway. Everything resets back to Ivan’s office prior to the explosion and they (unsuccessfully) try to convince him that this loop has been happening in his head for 8 years.

Tyrone believes Ivan is a hopeless case, but Tandy continues to probe Ivan in hopes of making him remember Mina and Nathan. Tandy loses her grip on reality when Ivan says Nathan is the person who keeps calling his work phone. In reality, Nathan called Ivan on that fateful night and was talking to him with a young Tandy in the backseat right before their horrific car crash.

Tandy picks up the phone and starts to talk to her father. She blocks everything out, including Tyrone’s voice, and becomes obsessed with talking to her father on the phone. Tyrone tells her they have to shut off the rig’s valves and stop this loop from happening again, but she is fixated on the telephone.

As Tandy continues to answer her father’s calls, Tyrone fights for his life and finally completes the steps to prevent the explosion. He also discovers that Ivan’s theory about the other employees on the rig is true. The initial energy explosion releases an energy that causes the employees to become infected with pure fear, which spreads as they touch each other and leads to their psychopathic state.

It is a scary revelation because Tyrone’s powers hinge on fear, but he was not close enough to the explosion to completely lose his mind. To his chagrin, the loop continues on, so Tyrone and Tandy agree to leave. Tyrone lets go of Ivan, but Tandy stays in his mind longer to talk to her dad. He goes back in to retrieve Tandy and discovers that she has been stuck in the loop for a long time.

Tandy tells Tyrone she wants to stay in Ivan’s mind because in her real life no one calls her or cares. “I remember bits and pieces of my life but from what I remember it was horrible,” says Tandy. “Nobody called me. Nobody called me because nobody cared. No one knows me. They think that they do but…I was homeless, aimless, fatherless, and friendless.”

The loop resets again and Ivan notices that there is an issue between the pair, so he leaves the room. Tandy becomes violent after Tyrone disconnects her call with her father and starts throwing daggers at Tyrone, which he dodges with his powers. He eventually admits he would do the same thing if it was his brother Billy on the phone, but he is not sure he remembers Billy’s real voice anymore.

This finally snaps Tandy back to reality right before yet another explosion. As the loop starts once more with Ivan in the room, she asks Ivan why he always has a cookie. She tells him he must be there for his daughter who made the cookie for him with her secret ingredient cardamom.

This triggers Ivan, who breaks down in tears as he suddenly remembers his former life. Ivan wants to escape but believes he is trapped in this state forever. Tyrone realizes that Ivan is the only one who can get to the core room and successfully shut off the valves because it is his mind. Ivan uses Tandy and Tyrone’s protection against the horrifying employees to finally stop the explosion and restore him to normal.

Ivan wakes up in the hospital and unfortunately doesn’t recognize Tyrone and Tandy, but the team feels good about their successful mission. Later on, Mina rushes into Ivan’s hospital room and hugs him as Tandy and Tyrone watch from the hallway. It’s a bittersweet moment for the duo, who are happy to give a woman her father back but also lament losing their loved ones that night.

It’s not clear how much Ivan remembers from the accident or when Tandy will try to probe him for answers, but Ivan is definitely not safe. Tandy saw a Roxxon hitwoman kill her mother Melissa’s (Andrea Roth) lawyer/boyfriend Greg (Gary Weeks) shortly after they began investigating the Roxxon files. So, the company has likely kept close tabs on its former senior engineer during his hospital stint. He wasn’t a threat in his previous state, but he could cause trouble for Roxxon now that he is able to speak up about their indiscretions.

Ivan’s potential fate may have been hinted at in “Princeton Offense” when Tandy peeked into Peter Scarborough’s (Wayne Pére) hopes. She saw Ivan Hess try to attack the risk management executive but he was subsequently drowned by Scarborough. This is a sign that Ivan is currently on Scarborough’s mind and will become his next target. Right now, Tandy is betting all her chips on Ivan’s knowledge, but will it come at an unfortunate price? Tyrone failed to get information from Duane before it was too late, so Tandy needs to get to Ivan before Roxxon silences him forever.