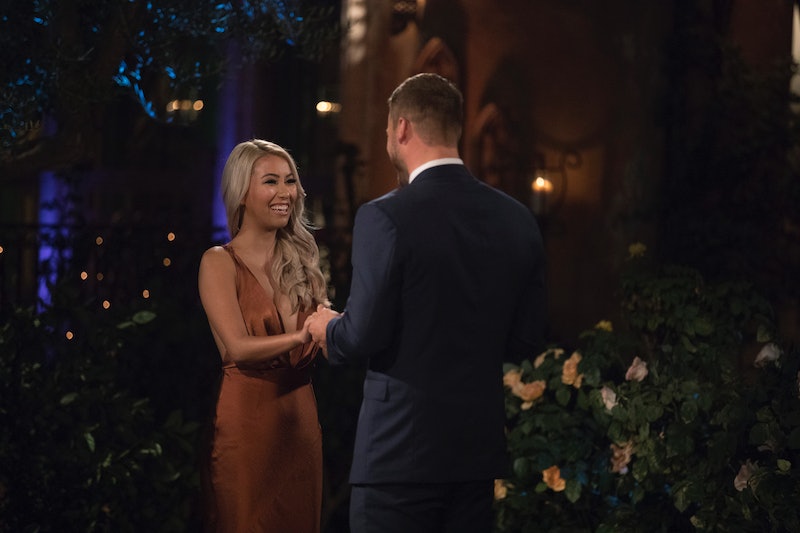 Joining Bachelor in Paradise in the last week is rough. Not only are you very unlikely to find someone to date, but you also barely get anytime to hang out on the beach and drink Wells Adams' margaritas. But, someone has to be last, and this year, one of the final people to join Bachelor in Paradise is Revian Chang, a contestant from Colton Underwood's Bachelor season.

If that name isn't ringing any bells, that's because Revian left on night one of The Bachelor after she didn't receive a rose. She's the third person from Colton's season to leave on night one and then join this season of BiP; Tahzjuan Hawkins and Jane Averbukh both also left the Bachelor mansion after only a few hours.

And, like Tahzjuan and Jane before her, Revian didn't do anything that stood out too much on the premiere. To be fair, it was hard for anyone to make a splash up against Catherine Agro, the DJ who brought her dog with her and interrupted Colton's conversations with other women a whopping four times.

But Revian, like all the other contestants, did get her time in the spotlight during the limo arrivals, and she chose to tell Colton he was a "stud muffin" in Mandarin. As these arrivals go, that's actually pretty cute.

While that was pretty much the extent of Revian's time on the show, she was featured in a deleted scene that was later posted online. Revian filmed one of the intro packages that is shown for select contestants on the first episode, but it didn't make the cut. Her video is about her job as a nurse working in cosmetic dermatology and about her parents' love story — they got married a week after meeting in an airport!

As for what else we know about Revian, she's 25 years old, she lives in Santa Monica, California, and is originally from Texas. She loves traveling, with her Instagram featuring photos from trips to Thailand, Switzerland, and Greece. She also loves attending music festivals. She went to Coachella and Electric Daisy Carnival this past year, but does not seem to have attended Stagecoach like a lot of her fellow BiP contestants.

Revian's Bachelor bio also explains that her favorite author is Stephen King, that she's fluent in Mandarin, and that she "once flew across the country to meet a guy she met on the internet." She seems to be an influencer, as well as a nurse, because her Instagram is full of photos of herself at events and she's even posted some ads.

Unfortunately, like on The Bachelor, we probably won't get to hear too much from Revian, since she's coming into Paradise so late. Along with Revian, another late arrival is Whitney Fransway, who made it to week six on Nick Viall's season of The Bachelor. It's too bad that these two probably won't find love in Paradise, but hey, they can probably gain some more Instagram followers out of it.