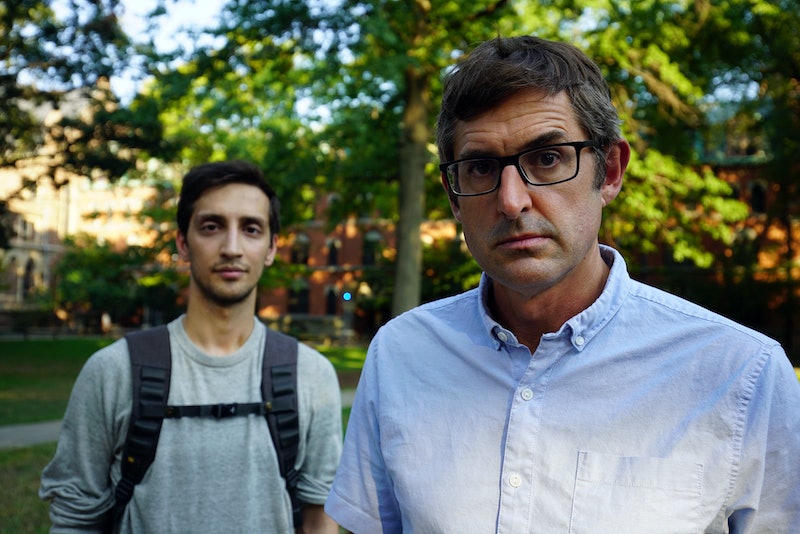 Another day, another Louis Theroux documentary. While the 48-year-old journalist occasionally dives into lighthearted topics, his latest BBC Two programme is taking on a wholly serious issue. Louis Theroux: The Night in Question examines sexual consent and assault allegations at American universities. One of the stories shown in the hour-long documentary is that of a Yale student who was accused of rape. So what happened to Saif Khan?

As the Express reports, Saifullah 'Saif' Khan enrolled at Yale in 2012 as a neuroscience student. Three years later, he was accused of raping a fellow Yale student; an allegation which he denied. Although cases like this can be tried in a criminal court, special administrators have been employed on certain campuses to independently investigate sexual assault cases — even when a person is found not guilty by the courts.

Yale did begin this process but held off from holding an official hearing until the court case had reached its verdict. This took over two years and, in March 2018, 25-year-old Khan was found not guilty of sexual assault, reports the New York Times. He was allowed to continue attending classes but was suspended from Yale in October 2018 after further allegations of physical and sexual assault, states the Express. This meant he was banned from campus and from attending any lectures.

At the time that Theroux and his team were filming The Night in Question, Yale's investigation was still underway. Khan has denied all of the allegations and even filed a lawsuit against Yale disputing the suspension. This was later withdrawn, according to Yale's news site, Yale Daily News. The site also reported that the university reached its own verdict in January 2019, finding Khan responsible for the original 2015 assault and expelling him.

Yale Daily News goes on to explain that universities use a lower standard of proof than criminal courts. The latter's standard is "beyond a reasonable doubt," while Yale and other universities can find someone guilty if there is a greater than 50 percent likelihood that they committed the crime.

Khan's lawyer Norm Pattis criticised the university's decision, writing on his blog that "the process Yale used to engage in its fact-finding was fatally flawed." He also added that Khan "will take an internal appeal at Yale and, should that fail, he will turn to the federal courts for relief." According to Pattis, Khan is likely to lose the Yale appeal and could spend some time fighting the decision in court.

Theroux told Bustle UK that Khan appeared "unflappable" throughout filming. "There was very little I could say that would shake him up. In fact, all the way through, I could just tell he [was] fine with me asking all of these detailed forensic questions. For a person in that situation, that’s unusual."

As well as spending time with Khan for The Night in Question, Theroux also talked to a young woman who felt like the system let her down when it came to being sexually assaulted. Interviews with the special administrators responsible for these independent university investigations will also feature in the documentary.

"I think the more you talk about consent the better," Theroux added to Bustle UK. "The whole #MeToo was based on the idea that there’s this silent majority of women who have also been harassed or touched in an unwanted way, ranging all the way up to being sexually abused or raped. The more we can make people, especially men, understand that this is an important and under-recognised daily reality then that’s healthy and good."

Louis Theroux: The Night in Question will air on March 4 on BBC Two at 9 p.m.