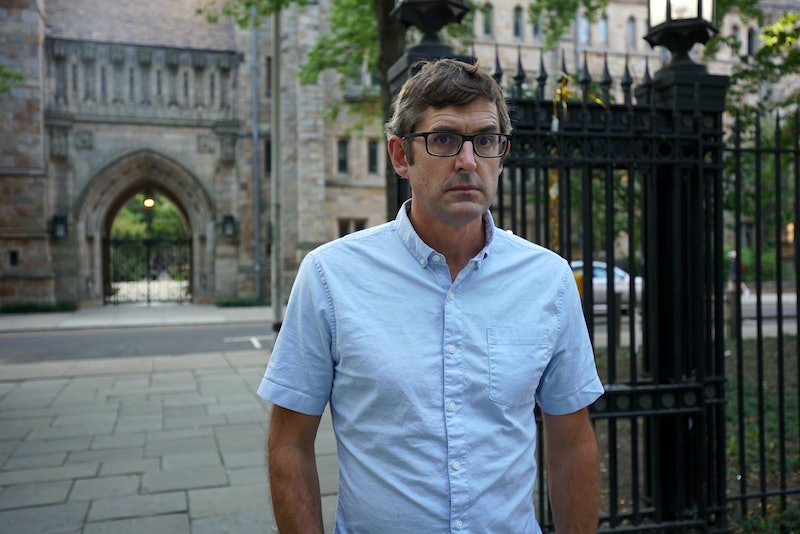 Louis Theroux has spent two decades lifting the lid on the weird, the wonderful, and, sometimes, the sinister lives of people across the world. From spending time with self-confessed Neo Nazis to infiltrating the notorious Westboro Baptist Church, nothing seems to faze this master filmmaker. In fact, Louis Theroux's unshakable composure in the face of bizarre, dangerous, and downright awkward encounters has come to define his filmmaking style. Whether he wanted to or not, Theroux has become more than a journalist: he's become an icon.

I got the chance to speak to Theroux about his new documentary, The Night In Question. Unsurprisingly, he is as friendly over the phone as he comes across on screen. After introductions are made, we delve into the documentary. This time, Theroux is taking on the topic of consent, sexual misconduct accusations, and how sexual assaults on university campuses are dealt with.

Theroux tells me that this topic seemed like a natural fit for him:

"I am always interested in the darker side of life, and I have made programmes in the past about sex offenders and paedophiles and so forth. In general, in America I have noticed over the last 10 years there’s been an ongoing story to do with the growing awareness for the need to take control or investigate sexual assaults or sexual misconduct more seriously on campus."

When I first kissed the woman who became my wife, do you know what I said to her? I said, ‘may I kiss you?’ And she made fun of me.

In the age of #MeToo, this is a huge topic to weigh in on. When I ask Theroux why he thinks it's important that we continue the conversation around consent, he takes time to consider his answer before saying:

"I think the more you talk about consent the better. I think that’s what has been healthy and important about 'Me Too.' The whole #MeToo was based on the idea that there’s this silent majority of women who have also been harassed or touched in an unwanted way, ranging all the way up to being sexually abused or raped. They have either not been listened to or, for very understandable reasons, have chosen not to pursue a criminal case through a court of law or going through procedures in an office. Just wanting to leave it behind. But this is actually a daily reality, and the more we can make people, especially men, understand that this is an important and under-recognised daily reality then that’s healthy and good."

While not all of Theroux’s documentaries are explicitly political, they always have a sociopolitical undertone, and The Night In Question is no different. Looking at the way that university campuses deal with claims of sexual assault and misdemeanours, Theroux opens up larger questions about how society as a whole approaches these kinds of issues (including in a political sphere).

In The Night In Question, Theroux meets university students on trial for sexual misconduct, as well as those who have filed allegations, to get an idea of how the system deals with accusations. Although the U.S. can often feel like a world away, I wonder if Theroux reflected on his own time at university while he was filming The Night In Question?

I would like to make a programme so hard to watch that literally no one could watch it.

"I had one girlfriend throughout the whole of university," he says. "There you go. That’s just who I was, and maybe who I am. We would occasionally break up every couple of terms and then sort of seek greener pastures and then slope back once we realised we were each other’s option. When I first kissed the woman who became my wife, do you know what I said to her? I said, ‘may I kiss you?’ And she made fun of me. But actually I feel vindicated because I think 'may I kiss you?' is not a bad thing to ask."

The need for ongoing conversations around consent is reiterated throughout The Night In Question. During his time at Yale, Theroux met Saif Khan, who was on trial at his university for allegedly sexually assaulting a fellow student. As ever, Theroux is not shy when it comes to the details of what is a very graphic case, and it makes you, as a viewer, wonder how he keeps his cool.

At times, Khan is so frank and honest about what he's discussing, it almost seems as if Theroux has met his match. "Although I was pretty tough with him, I had the sense that [Khan was] unflappable," the filmmaker says. "There was very little I could say that would shake him up. And you’ve also got to think, 'will this cause him to pull access from the film?' If I asked him all these questions, and in a fairly cold and clinical way, [I was thinking]: 'Is he going to say no I didn’t sign up to doing this?' In fact, all the way through, I could just tell he [was] fine with me asking all of these detailed forensic questions. For a person in that situation, that’s unusual."

I find myself googling old friends from school but also my past subjects. I like to find out how people are doing.

But even with Khan, Theroux remains very, well, Theroux about it. After all, he's has been having these kind of conversations for most of his career. In the last year alone, we have seen him explore polyamory at a sensual eating party, ask what happens when someone chooses to die, and deep dive into the topic of surrogacy and adoption in the series Altered States. But is there any similarities that bring all of Theroux’s documentaries together? "The heart of all of it is this sense of relatable people involved in choices that create a great deal of angst," he says.

"I think what draws me in, for want of a better term, is conflict. I mean psychological conflict or self-conflict. Or a sense that there is an issue, dilemma or a set of beliefs that cause you to be at war with yourself. I know that sounds a bit sort of vague but very often I do programmes with people who either believe or do things that are deeply devious or questionable. Whether that’s in a prison or out on the streets, among criminals or a cult. Or Neo Nazis, among gangster rappers, or hardcore porn actors. And you’ve started to think that you sort of like someone and then there is a conflict between liking them and figuring out why they would do this thing that you have questions about."

"It's almost something I have to fight against slightly, in as much as I'm sort of pathologically interested in people and how their lives turned out. I am slightly obsessed with the ravages of time, where they are now, and the strange nature of the life journey that people go on. I find myself googling old friends from school but also my past subjects. I like to find out how people are doing and what’s going on with them. That being said, what you find is, very often, it doesn’t lead to very helpful material for a programme because a lot of people don’t change that much they just get a bit wrinklier."

Louis Theroux: The Night in Question will air on BBC Two at 9 p.m. on March 4. I admit to Theroux that I, like many people, may find watching the programme a little difficult. "The idea of a programme being hard to watch, I think, is a compliment, although it might not sound like one," he says. Laughing, he continues: "I would like to make a programme so hard to watch that literally no one could watch it. Then I could probably retire. Just 10 seconds and then people would think ‘no I am done now, that’s quite enough for me.'"

I really hope that doesn't happen any time time soon.

Watch Louis Theroux: The Night in Question on BBC Two at 9 p.m. on March. 4