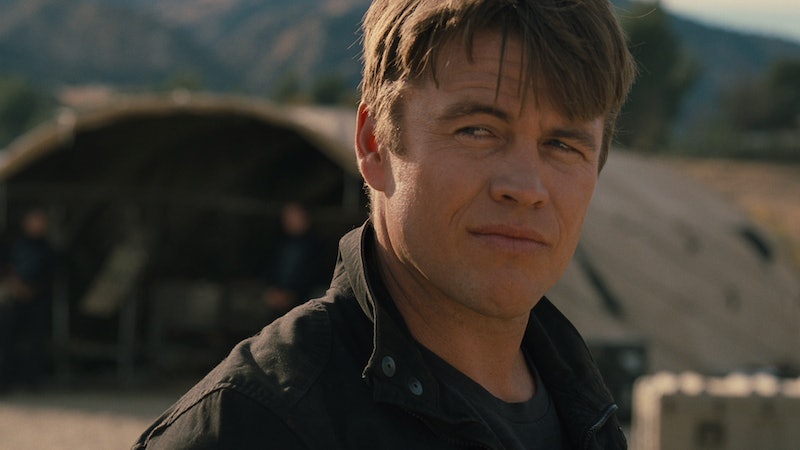 Though trailers for Westworld's third season confirmed actor Luke Hemsworth would be returning to the series as Delos security guard Stubbs, he was nowhere to be found in the premiere episode. So where is he? And what even happened to Stubbs in Westworld Season 2, anyway? It's been so long since this show was on air, it's hard to remember where everyone was left in this puzzle box of a story.

Heading into the second season, Stubbs' fate was also a mystery, since he had last been seen in Season 1 getting ambushed by Ghost Nation warriors in the penultimate episode. He had been heading into the park after getting a possible ping on the location of missing tech Elsie Hughes, and was never seen again. But when Season 2 picked up two weeks after Dolores' massacre at the Delos gala, Stubbs was abruptly back with no explanation, as part of the team that discovered a disoriented Bernard lying on the beach.

Flashbacks to the two weeks before those events filled in the blanks on where Stubbs had been in the interim. After Raj World guest (and William's daughter) Emily washed up on the shores of Westworld, she was also kidnapped by the Ghost Nation, at which point she met a still-captive Stubbs. Shortly thereafter, Emily escaped from the tribe to reunite with her father, and Stubbs was let go after a brief encounter with Ghost Nation leader Akecheta.

After being released, Stubbs made his way back to the Mesa, where he met up with Charlotte Hale and the Delos forces attempting to regain control of the park. They were soon assaulted by Dolores, who stormed the Mesa to find her father, Peter Abernathy. Dolores found both Stubbs and Charlotte guarding Peter and, though she almost killed Charlotte, the pair was able to make a quick escape while Dolores was briefly distracted.

After losing Peter (once again) to Dolores, Charlotte hatched her plan to kill all the hosts by transferring Maeve's code — which granted her the ability to psychically control hosts through the mesh network — into Clementine. What followed was a bloodbath, as one-third of the hosts in the park (including Teddy, Akecheta, and Maeve's daughter) were able to escape into the digital Eden of The Sublime, while two-thirds of them (including Maeve, Hector, and Armistice) were slaughtered by the mind-controlled hosts.

That massacre led up to the events that started the season, two weeks after the night of the gala, as Stubbs and the newly arrived Delos reinforcements found Bernard on the beach. They soon met up with Charlotte again — who was now actually Dolores' consciousness inside the printed body of Charlotte — and set off to find Peter Abernathy once and for all. Along the way, they discovered the truth that Bernard was a host, and that Abernathy's control unit was in the Forge. There, Halores slaughtered the Delos forces, beamed the Sublime to a secret location, and used her father's control unit to destroy the Forge.

Her plans fulfilled, Dolores finally made her attempt to leave the park — with five host consciousnesses in her purse — inside Charlotte's body. But moments away from boarding the boat, Stubbs seemed to somehow sense the truth about Halores. Instead of stopping her, he revealed a shocking truth: he is a host programmed by Robert Ford with the "core drive" to protect all the other hosts. Rather than exposing Halores as a host, he let her pass and leave the park… but remained behind himself.

What has Stubbs been up to since Dolores left Westworld? Could he have helped Maeve — who was last seen in a pile of dead host bodies on the beach — in some way? Is he still on the island? If so, will Bernard encounter him on his return journey? Whatever the case, knowing Stubbs is a host will change everything for Dolores, Bernard, and the rest of the robots (particularly considering co-creator Jonathan Nolan only wrote it into the show the night before it was shot).