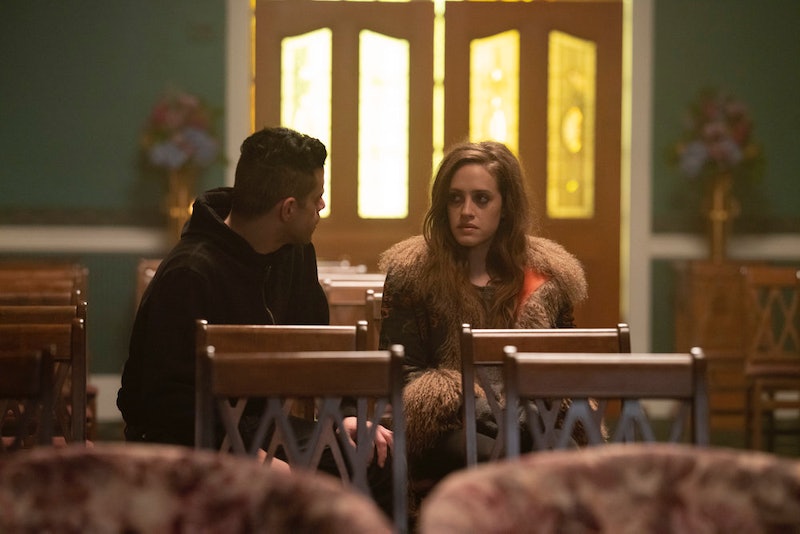 Spoilers ahead for Mr. Robot Season 4, Episode 2. Mr. Robot's final season is forcing its characters to deal with the sins of their past, and for Darlene, that means confronting what she did to Susan Jacobs. Though the character has gone relatively unmentioned for more than a season, in the Oct. 13 episode, Elliot is tasked with finding out what happened to Susan Jacobs and figuring out how he can manipulate her to get access to a bank that will help him take down Whiterose. Unfortunately for Elliot, not only is Susan Jacobs dead, but it was his own sister who killed her.

As Philip Price explains to Elliot the true nature of the Dark Army — specifically that it's merely a sector of an all-powerful organization called the Deus Group — Elliot formulates a plan to hack his way into the group's bank, Cyprus National, and steal all of their money. However, the only way into the Cyprus National Bank is through Deus Group liaison Susan Jacobs, who no one knows is dead except for Darlene.

Susan Jacobs was introduced in the first episode of Mr. Robot's second season as a high-level member of E Corp infrastructure who was formulating plans with CEO Philip Price and COO Scott Knowles to respond to fsociety's threats. She had earned the nickname "Madame Executioner" for her ability to strike down any lawsuit that came E Corp's way — including the case that sought justice for the death of Darlene and Elliot's father, who contracted leukemia because of an unsafe E Corp project he was tasked to work on.

In Season 2, while Elliot was busy wrestling with Mr. Robot in prison, Darlene and the remaining members of fsociety hacked Susan's home and turned it into a temporary operation base. When Susan unexpectedly returned to her house, fsociety took her hostage and tied her up. After monologuing about the pain Susan had caused her family as a part of E Corp, Darlene then tazed her, causing Susan's pacemaker to short out and kill her. Darlene insisted Susan's death was an accident, but the other fsociety members suggested differently: they claimed she'd seen messages revealing Susan had a pacemaker while hacking her email, and thus tazed her knowing it would be fatal. Afterward, Darlene and Cisco took Susan's corpse to an animal morgue and disposed of it in a furnace.

Season 4 has already been exceptionally bleak, beginning with the violent death of one of the show's main characters and putting the few who haven't met bloody ends all in incredibly difficult situations. Now, on top of everything else that's happening, Elliot has to confront the fact that his sister killed someone and may have ruined his one chance to take down Whiterose in the process, while Darlene must risk pushing her brother away at a point when they are all each other has left in the way of genuine friendship. With a whole season to go, it's likely that Elliot will find a way around the Susan Jacobs problem — but with the Dark Army on their tail, it's possible he and Darlene won't be able to work through what happened to her, and Darlene's involvement in it, before one of them ends up dead.