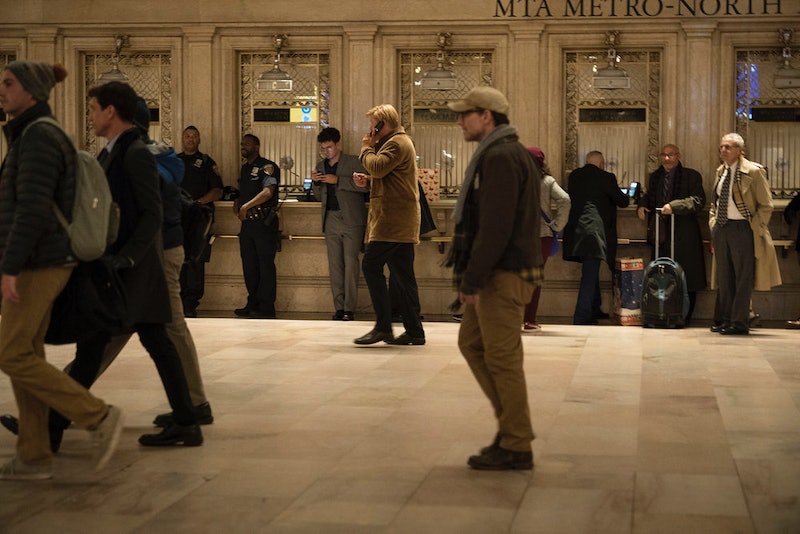 Spoilers ahead for the Season 4 premiere of Mr. Robot. Across four seasons of Mr. Robot, Angela Moss has lost everything: her boyfriend, her job, her sense of reality, and now, her life. But as brutal and certain as Angela's death appears, it's possible she'll come back in the future — or even, potentially, the past.

Throughout Season 3, Angela was fueled by delusions that if she followed Whiterose's instructions, she would be able to see her late mother again. In fact, she was so fixated on the idea of going back in time, she rewound news footage of the bombings she helped to commit, watching the buildings piece themselves back together and hoping that the people inside could come back to life. Whiterose promised Angela that she could bring people back from the dead — which, ironically, may be what happens to Angela.

Because Whiterose is so obsessed with time, fans have postulated that the massive machine she's constructed beneath the Washington Township Plant is a time machine, a machine that can access a parallel universe, or possibly even a supercomputer that can "hack" reality. If any of those theories are true, Whiterose may be able to transform the world of Mr. Robot into one in which Angela never died. She could even make it so that Angela never lost her boyfriend, her job, her sense of reality, or her innocence.

But until that plan comes to fruition (if it even is Whiterose's real plan), Angela Moss is dead. Mr. Robot's Season 4 premiere continues a conversation that Angela had with Phillip Price — the E Corp CEO and her real father — that started in the Season 3 finale. Price tells her to find a way to "live with what she's done," referring to Angela's involvement in the Season 3 cyber bombings, and how she was "played" by Whiterose. But despite Price's pleas for Angela to give up the fight, Angela swears revenge against Whiterose. Whiterose, who is listening in on the conversation, then allows Price to walk away from Angela as two Dark Army goons shoot her in the back of the head. Just like that, one of the show's main characters is cut down five minutes into the season premiere.

Angela was never exactly destined for a happy ending on Mr. Robot, but the brutality of her death leaves no ambiguity as to whether or not she may have survived. Whiterose even goes to the trouble of sending Elliot a picture of his deceased childhood friend to drive the point home to him and the audience that yes, she's really dead (although Darlene is left in the dark). Elliot's rage over Angela's death prompts him to find new ways to take down E Corp, and even unites him with Price against their common enemy in the episode's final moments. If fans are correct about Whitrose's machine, though, all Elliot needs to do to get Angela back in his life is let Whiterose enact whatever cataclysmic plan she’s been concocting. Until (or if) that ever happens, though, Angela's fate is sealed.

More like this
The ‘Love, Victor’ Showrunner Gave Fans Hope For A Possible Spinoff
By Brad Witter
Everything We Know About When To Expect The Rest Of The Upshaws Season 2
By Kadin Burnett
Everything We Know About When To Expect Money Heist: Korea Part 2
By Kadin Burnett
Legacies Showrunner Said There Is Still Hope For More Vampire Diaries
By Gretchen Smail
Get Even More From Bustle — Sign Up For The Newsletter