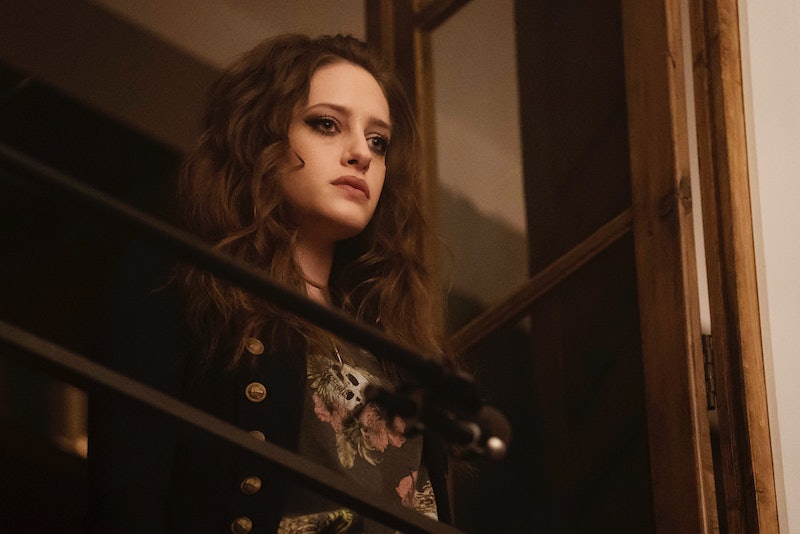 Some TV shows you watch, enjoy for an hour, and then mostly forget about until the same time next week. Then there are shows that you watch, combing the screen for clues the entire time, and then spend a whole week dissecting and debating and theorizing with your friends and other fans. Needless to say, USA's techno-thriller Mr. Robot is the latter kind of show. Viewers have come up with a plethora of theories to explain the plot, some so widely accepted they're practically canon (Elliot is in prison/a mental institution) and some so bizarre it's hard to know how someone even came up with it (Elliot is a Pokémon trapped inside a Poké Ball). But one particular Mr. Robot theory is perhaps the craziest yet… and also perhaps the closest anyone has come to predicting the end of the show.

Eagle-eyed Reddit user tekn04 noticed that the security code Susan Jacobs (aka Madame Executioner) used to turn off the alarm in her malfunctioning smart home — 22381 — during the Season 2 premiere might be a reference to a historical event. On Feb. 23, 1981, Lieutenant Colonel Antonio Tejero and 200 soldiers of the Spanish Civil Guard took members of Spanish parliament hostage in an attempt to overthrow the government, now known as the 23-F coup.

According to The New York Times, "Spaniards were able to watch the dramatic events live since television cameras continued to roll, capturing images of guns being fired and members of Parliament taking cover under their desks. It was all over 17 hours later, after King Juan Carlos delivered a speech calling on the armed forces not to support the coup and to respect the fledgling Constitution."

What does a failed Spanish revolution have to do with Mr. Robot? Maybe nothing; maybe Susan's security code was just a coincidence. But do you really believe that? I don't think there are any coincidences in the world of Mr. Robot, and I think creator Sam Esmail's reference to 23-F is entirely intentional. After all, his show is all about revolution. And if you treat the Spanish government as a metaphor for Evil Corp, there are a surprising number of parallels between the 23-F coup and the plot of Mr. Robot.

In this metaphor, King Juan Carlos would be represented by Evil Corp CEO Phillip Price; and in their attempt to overthrow the government, the rebels targeted Prime Minister Leopoldo Calvo-Sotelo, just like Price's underling, CTO Terry Colby, was targeted by fsociety in their early strikes against the corporation. In the end, the coup didn't have its intended effect, thanks to the efforts of King Juan Carlos — just like the fsociety hack (although technically successful) didn't bring down Evil Corp as intended, thanks largely to the machinations of Phillip Price.

So what can 23-F tease about the future of Mr. Robot? First of all, it's not good news for fsociety's future. The ineffective coup in 1981 was followed by a second in October of 1982 — but the latter attempt never even got off the ground, foiled by the authorities before it could be pulled off, and the coup's leaders were apprehended and sent to prison. If fsociety tries to pull off a second hack this season to finish what they started last year, the result could be disastrous for them.

Secondly, there's the fact that the Spanish rebels weren't striving for some ideal of bringing the power back to the people like Elliot, Darlene, and the rest of their hacker collective; in fact, Antonio Tejero and his fellow conspirators were right-wing sympathizers whose goal was to return Spain to the dictatorship it had been under Francisco Franco, until his successor King Juan Carlos had dismantled the Francoist regime and transitioned Spain to a democracy in 1978. It's obviously not Elliot's intention to wipe out democracy and give rise to a dictator… but what if that ends up being the unintended consequence of his strike against Evil Corp?

If the security code was a direct reference to 23-F, then that gives rise to another question: Was the code simply inserted as an Easter egg for watchful viewers like tekn04? Or did the character of Susan Jacobs herself choose that code intentionally — perhaps hinting that she's a bit more subversive than she may originally appear? Could Evil Corp's general counsel be plotting her own coup against the corporation, either by herself or in collaboration with fsociety?

As per usual with Mr. Robot, one answer simply gives rise to so many more questions. And it remains as difficult as ever to determine when you've stumbled on a hidden truth… and when you're simply grasping at straws. Hopefully we'll find out if the 23-F reference is intentional — and how Susan Jacobs fits into the grand scheme of things — as Season 2 continues.

More like this
A New 'And Just Like That' Table Read Pic Confirms A Key Character's Return
By Jack Irvin and Grace Wehniainen
This 'Gossip Girl' Wardrobe Error Has Gone Viral On TikTok
By Alyssa Lapid
This Dark 'Happy Valley' Theory Will Keep You Up At Night
By Sophie McEvoy
This Dark 'Happy Valley' Theory Is Staring You Right In The Face
By Sophie McEvoy
Get Even More From Bustle — Sign Up For The Newsletter
From hair trends to relationship advice, our daily newsletter has everything you need to sound like a person who’s on TikTok, even if you aren’t.