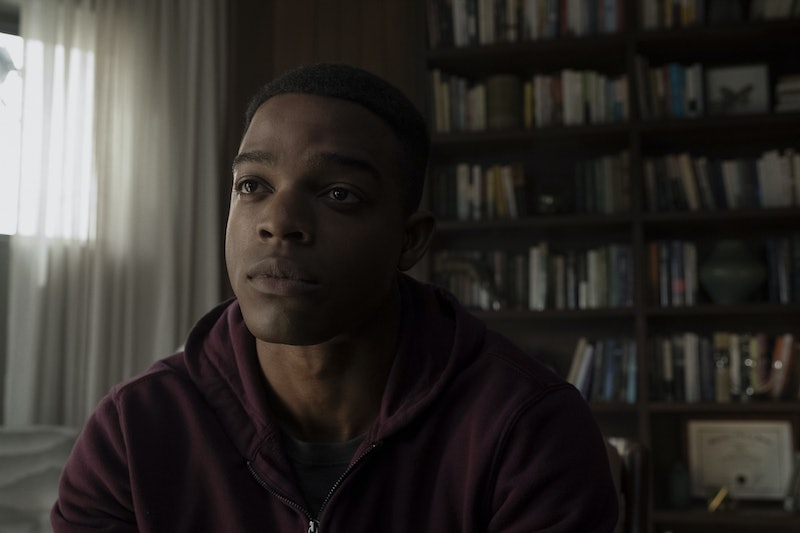 Spoilers for Homecoming Season 1 ahead because, well, this is an article about the end of the show. One of the running mysteries throughout the first season of Homecoming is what happened to Walter Cruz, a soldier who participated in the enigmatic program at the center of the series, but seems to have since disappeared. It's made clear early on that he developed a special relationship with his therapist, Heidi Bergman (Julia Roberts): They flirt, play pranks on one another, talk about road trips to California. But when Heidi uncovers the real reason they're all there, she does something that drastically alters the course of his life.

The Homecoming Transitional Support Center is billed as an experimental treatment meant to help veterans readjust to civilian life. However, in actuality, these soldiers are being secretly doped with a medication that targets their traumatic memories and erases them entirely — not so they can go on to lead happy, well-adjusted lives, but so they can re-deploy again...and again...and again. After Heidi discovers the truth, she grabs Walter and marches off to the cafeteria, where the Homecoming crew has been drugging the soldiers via their daily meals. Heidi takes two big, heaping plates of food: one for herself and one for Walter, who has already eaten, making his a double dose. The result? Almost complete memory loss for both Heidi and Walter. It's like their time at Homecoming never happened — all they remember is that they were there.

In the flash-forwards, it's apparent how effective that medication really is. Heidi is approached by an agent from the Department of Defense who's investigating Homecoming and is unable to give him an intel, not because she doesn't want to, but because she straight-up doesn't remember. And when her old boss, Colin Belfast, comes to see her to ensure she keeps her mouth shut, she doesn't even recognize him — in fact, he manipulates her into starting a romantic relationship with him. But as she slowly begins to piece things together, she, Colin, and the DoD agent all race to find Walter.

We eventually learn that Walter moved back home with his mother for a short time, as the drugs would have left him fairly incapacitated. Then, once he'd recovered enough, he moved out West just as he told Heidi he'd always planned: She discovers him at one of the spots on the road trip they'd talked about in their sessions.

There, Walter has built a new life for himself. He bought a cabin, and Heidi watches as he works outside. She follows him to a diner to talk, but Walter doesn't seem to remember her whatsoever. The two have a pleasant chat — as strangers — and then Walter leaves, with Heidi looking on from the window.

This ending represents a serious departure from the finale of the original podcast the series is based on, and which has already released two seasons. In that version, Heidi never actually finds Walter. She has voicemails that come in from him on a phone he left with his mother, but nothing else. And Colin (who is forced to take the fall for Homecoming in both the show and the podcast) never manages to find Walter either, leaving him safe from the clutches of Geist, the nefarious company that ran Homecoming — at least for now.

Amazon's version has already been green-lit for more episodes, so the story is far from over for Walter and Heidi. Whether Season 2 of the Amazon show will follow the same beats as the podcast, or take major departures like they did with Season 1, remains to be seen. But one thing iw for sure: we definitely haven't seen the last of Walter and Heidi.