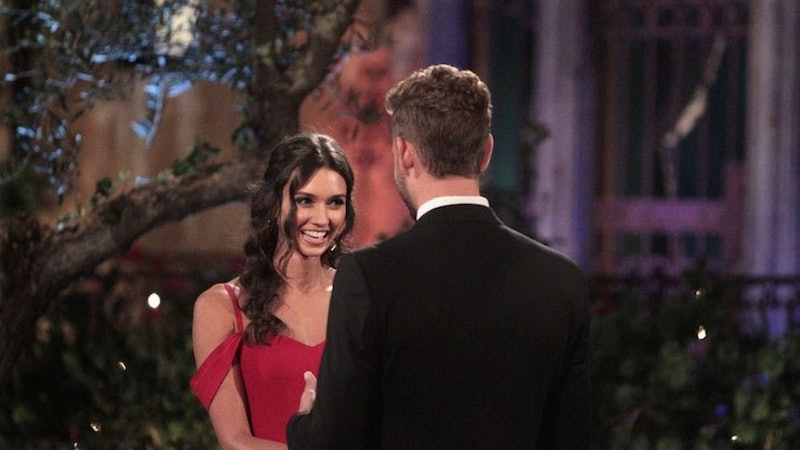 Bachelor in Paradise Season 6 is almost over, and it's pretty clear which couples might make it and which ones definitely will not. But even with the end in sight, there are still a few more singles arriving on the beach. One of them is Whitney Fransway, who was on Nick Viall's Bachelor season back in 2017.

Whitney made it to week six on The Bachelor, so she was around for quite some time. Still, she wasn't the most memorable presence on the show — and that's not an insult. There are some Bachelor and Bachelorette contestants who seem made for reality TV (for example, Corinne Olympios, who was also on Nick's season), and there are some contestants who are just normal folks without over-the-top personalities. Whitney was chill. She was quiet. She didn't get involved with drama.

Whitney's biggest scene came when she was sent home. Rather than being let go during a rose ceremony, Whitney was part of a two-on-one date with fellow contestant Danielle Lombard. The date was a day at the beach in Saint Thomas, but it was pretty uneventful since Danielle and Whitney didn't have beef, like the people chosen for two-on-ones usually do.

Nick didn't give Whitney the rose because he just wasn't that into her, or as he put it, "As much as I really want to give it to you, I feel like in my heart, I just feel like I can't." In response, Whitney started positioning herself against Danielle, telling both Nick and the camera that Danielle wasn't ready for a committed relationship. That didn't matter, though. It was too late. Whitney was being left on a beach while Danielle and Nick flew away in a helicopter. (Hours later, Nick would also send Danielle home during the evening portion of the date.)

Since then, Whitney has remained close with a number of women from her season. In particular, she's very good friends with former Bachelorette Rachel Lindsay and BiP star Kristina Schulman. Whitney posted an Instagram photo of herself and other Bach ladies at Rachel's recent wedding and wrote, "Rach has been a best friend since meeting in the limo night 1. We've laugh[ed], cried, stayed up talking of our pasts, and talking about our dream future husbands." As for Kristina, she's shared a ton of pics of them together too, including one where she wrote, "So grateful to have this little love bug in my life."

Whitney was listed as a Pilates instructor when she joined The Bachelor, and while she's still into fitness, it's unclear if she's still teaching. What is clear is that she is very much an Instagram influencer now. She's done sponsored posts and collaborated with brands that make wine, hair curlers, perfume, and mascara. She's even a Victoria's Secret ambassador and has official representation. For someone who didn't make a huge splash on reality TV — and who has relatively few Instagram followers at 100K — she's doing better than a lot of former Bachelor stars when it comes to her SponCon game.

We'll have to see if Whitney is able to find love on Paradise with so little time left, but even if she doesn't, at least she'll get to hang out at a beach resort for a while. And maybe she'll even reveal some more gossip about Stagecoach. Yep, she was there, too.