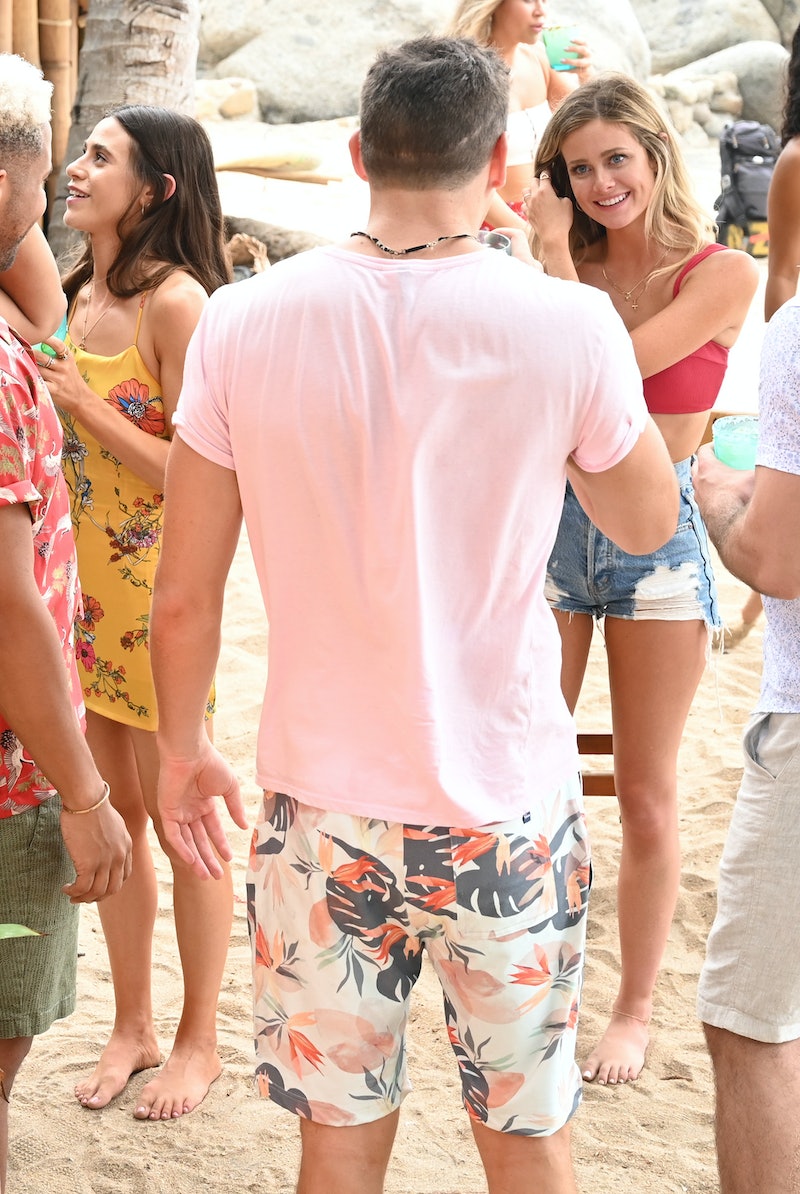 The Bachelor in Paradise cast's time together offscreen is seeping into their TV time more and more. It definitely creates more intriguing drama for viewers, but for them, it's making things super complicated. As was revealed in Tuesday night's episode Hannah and Blake hung out before BiP began filming, and the whole beach — including Dylan — just found out about it. After enduring Blake's love octagon with half the women there, Dylan didn't understand why Hannah couldn't brush him off. But now that we know they already had a history, it's all starting to make a little more sense.

Dylan has made it clear that Hannah is the only girl in Paradise he's interested in exploring a connection with. After being confronted by Kristina and Caelynn and, as a result, being dumped by Tayshia, Blake decided that he felt the same way. He said he's convinced there's something between him and Hannah, and that he sees a future with her. Before Tuesday's episode, that seemed a little presumptuous of him to say. But according to Hannah, it wasn't, because Blake flew to Alabama to see her before they left for Paradise.

Apparently, they exchanged some texts and Blake wanted to show Hannah that he was interested in her, so he bought a flight to her hometown to visit. She told Dylan they hung out and just kissed, and then she went home. But she was very slow to admit those details, so it seems like there could be more that she hasn't yet revealed. It's also telling that although Blake has confessed his feelings for Hannah onscreen, he never said anything about them having a past.

Dylan was obviously upset because he gave Hannah his rose the week prior, and she has admitted to having feelings for him. But she's still set on keeping an open mind during the whole process. So far, she has kissed both Wills and Blake, which she told Dylan about immediately afterward both times. She's obviously conflicted and cares about Dylan, but the fact that she's been holding back about her past with Blake (especially knowing she's not the only girl there who has a history with him) may give him some hesitation.

Tayshia, who made it to the end of Colton's season of The Bachelor with Hannah G., was surprised and also frustrated to learn about Hannah's history with Blake. She thought they were friends, and considering she went on a date with Blake and even began to develop feelings for him, was disappointed Hannah didn't tell her about Blake's visit beforehand. Hannah didn't understand why Tayshia was upset and claimed that Tayshia "mean girl-ed" her.

Bachelor Nation is divided at the onslaught of this Blake-Hannah development. Some are upset with her secret-keeping, and others say she should be able to live her life how she pleases. Most of them just feel bad for Dylan, but there's still a chance he and Hannah could work things out. Of course, fans don't know if they're together in real time. But Dylan did send a tweet defending her from online hate. "Give her a break y’all," he wrote. "I know what I signed up for." But does he really?

More like this
Kim Kardashian’s “Gym Time” Video Features A Bikini & Thigh-High Boots
By Grace Wehniainen
Where Is Clayton Echard Now? The Former 'Bachelor' Star Is Dating Susie Evans
By Kadin Burnett
Here's Our Ranking Of The Funniest 'Bachelor' Casting Ad One-Liners So Far
By Grace Wehniainen
Kathy Hilton Tried To Explain Why She Misidentified Lizzo As Precious On Live TV
By Jake Viswanath
Get Even More From Bustle — Sign Up For The Newsletter