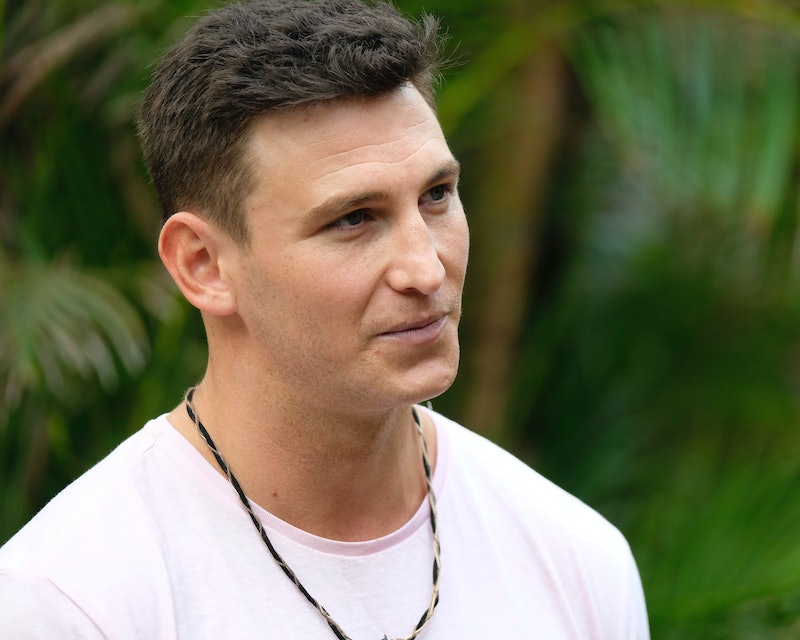 It didn't take long for trouble to settle in Paradise. Not even thirty minutes into night two, Blake was confronted by Kristina and Caelynn regarding their past relationships, and neither of the discussions went well. In short, Blake slept with both Caelynn and Kristina within a 24 hour period at the Stagecoach music festival in April, and neither of the girls are happy with how he handled it, so they told him on the beach in Mexico.

Blake obviously knew what had gone down between him and each of the girls, but he — for some reason — didn't anticipate either instance coming up in Paradise. According to Kristina, Blake waited to tell her about his night with Caelynn until days before arriving in Mexico, which to her, seemed "calculated." Caelynn was upset with him because he apparently told her to keep their past a secret. When both of the women came to him about their concerns, he acted completely blindsided.

He told Kristina he felt "ambushed" and repeatedly apologized to Caelynn, saying he had "no idea" she was so upset. But his surprised face didn't seem all that genuine and Bachelor Nation is calling him out on it.

People have been calling it a love triangle, but that's really not an accurate descriptor. Neither Kristina nor Caelynn have feelings for Blake anymore. (Caelynn told Chris Harrison that Blake wasn't her "favorite person" and Blake straight up asked Kristina if she had romantic feelings. She said no.) This is really just an attempted reconciliation gone awry.

They were both upset because Blake didn't think he did anything wrong. As a "single guy," he felt he had the right to sleep with whoever he wanted, and he didn't understand why both of them felt disrespected. Although sure, it's anyone's right to sleep with multiple people in the same day (as long as it's done consensually and respectfully), he was missing the point. Rather than listening to the girls and trying to understand where they were coming from and what they were feeling, he got defensive and played the confused card.

Not only that, he immediately began worrying about his image on camera. In confessionals, he kept using the phrase, "I look like," and following it with negative things that could affect the way he's perceived. That trait of Blake's, right there, is what Kristina and Caelynn are trying to talk about. Later in the night, Blake released text messages between him and Caelynn in an attempt to show that she was "lying," but all they did was prove that he wasn't too concerned with anyone else's feelings about how his time with them played out. A couple of messages out of context (and without Caelynn's consent) isn't exactly proof of anything.

Blake argued that it was unfair for the girls to call him out on TV, but they're all adults, and should be able to handle the results of their actions regardless of where they are. Blake wanted to separate Paradise from "real life," as he said to Kristina. But it's obvious that everyone's real life — now even Clay and Annaliese's — is washing up onto the beach. Their only choice is to address it and deal with it as it comes.