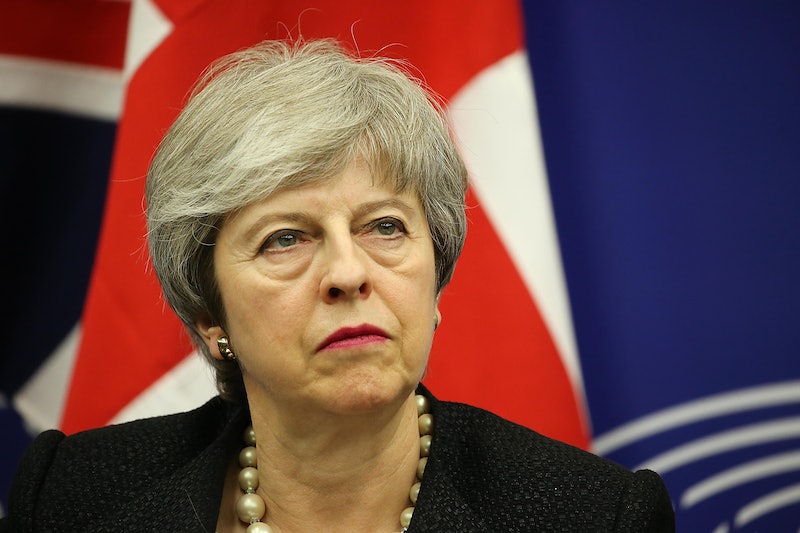 If you thought Brexit chat was almost over, think again. On March 12, the Prime Minister faced another crushing blow to her Brexit plans. A majority of 149 MPs rejected her deal for the second time. (The first on Jan. 15 had a majority of 230.) So what happens after Theresa May's second Brexit defeat? As it stands, Brexit is still happening on March 29. But several things could happen in the meantime.

For those who are a little confused by proceedings, you're not alone. Wrapping your head around the terms of May's proposed Brexit deal, let alone what's going on with the current political situation, is becoming more and more difficult.

In a nutshell, the reason MPs aren't prepared to go ahead with the prime minister's plans is because of something called the "backstop". As the Financial Times explains, this is a plan designed to prevent a hard border being reinstated between Ireland and Northern Ireland. But it effectively means that the UK would remain in a customs territory with the EU until an alternative agreement has been reached. (Northern Ireland would also be under different regulation rules than the rest of the UK.)

The problem is that, under May's deal, the UK can't leave the backstop without EU approval. Although the prime minister attempted to reassure MPs this wouldn't be the case with her second deal, the attorney general said there was still a "legal risk" that the UK could be stuck indefinitely, reports Sky News.

So, what happens now? On Wednesday March 13, MPs will vote on whether the UK should leave the EU without a deal. If they vote against this, another vote will be held on March 14 to see whether May should delay Brexit by requesting to extend Article 50.

Here are the scenarios that are most likely to occur in the coming weeks.