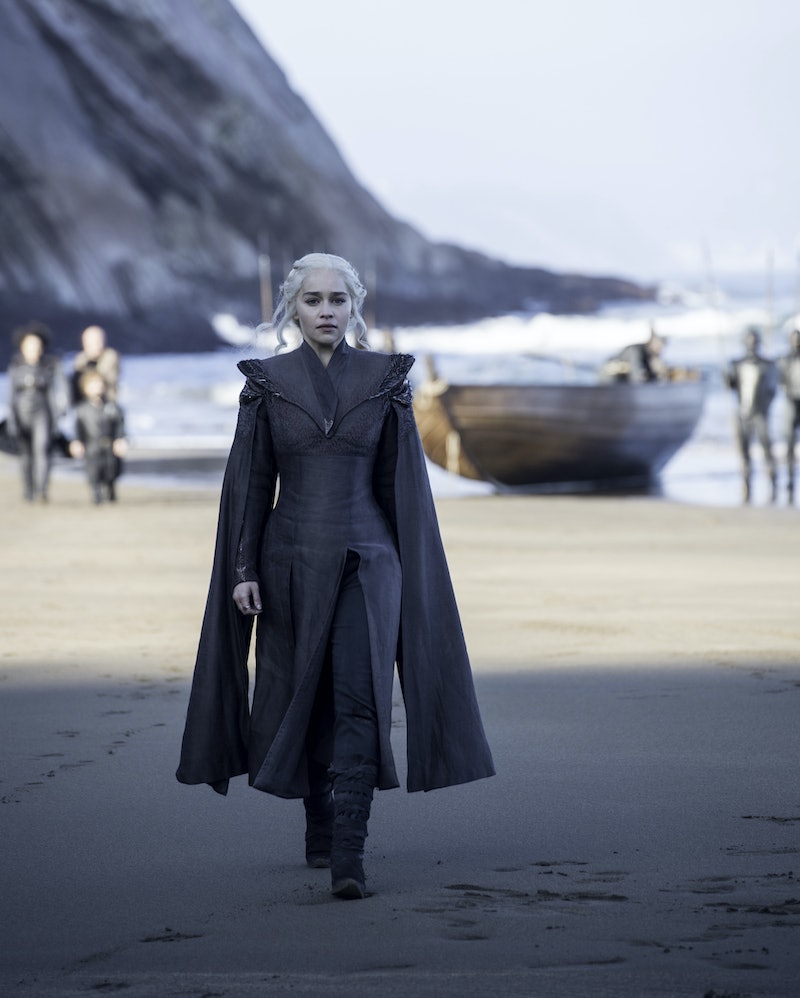 With the first three episode titles for Game of Thrones Season 7 released on Friday, there's one in particular that stands out: "Dragonstone." Surely fans are already wondering what happens at Dragonstone this season. If you know the GoT lore, you may recall that Dragonstone is the Targaryen home and former stronghold of Stannis Baratheon. Given this bit of info, the episode title of the Season 7 premiere directly refers to the place that Daenerys will likely land when she first sets foot in Westeros. After spending much of her life in exile following the murder of her father, it's natural that she would want to, quite literally, go home.

According to the Game of Thrones Wiki, Dragonstone is the name of the island just off the coast and north of King's Landing, as well as the name of the castle itself. That is, until Robert Baratheon's rebellion, which saw the murder of Dany's dad, King Aerys II, and Stannis Baratheon's seizure of Dragonstone as the basecamp to rebuild a fleet for Robert's purpose.

So, basically, until Dany came home, Dragonstone was a Baratheon holding, and imaginably, with Robert dead and his wife, Cersei, the Queen of Westeros, Dragonstone is now part of her holdings. However, early photos show Dany basically waltzing back into the abandoned castle, cool as a cucumber; this may not sit well with Cersei if and when she learns of Dany's return.

In Season 2 of GoT, fans watched as Stannis converted to the religion which worshipped the Lord of Light in order to gain new followers and support after finding that those lords and soldiers loyal to the resident of Dragonstone were small in number. Dragonstone was a prominent location to the storyline. Come to think of it, returning to Dragonstone is something that both Daenerys and the audience will be doing in Season 7.

The GoT Wiki also makes note of a crucial feature about Dragonstone, which could come in hand for Daenerys, who's plotting something big: Dragonstone is essentially an impenetrable fortress. Due to the skilled Valyrian architecture (the Valyrians are Daenerys' people), Dragonstone is a reportedly impenetrable building. Should Daenerys maintain control of Dragonstone in Season 7, then her plans to possibly reclaim King's Landing and rule Westeros in the tradition of her family is off to a good start.

Basically, Dragonstone is a major, major location. All signs point to it being the locus of big negotiations, a bittersweet homecoming, and possibly a battle. Watch this space.