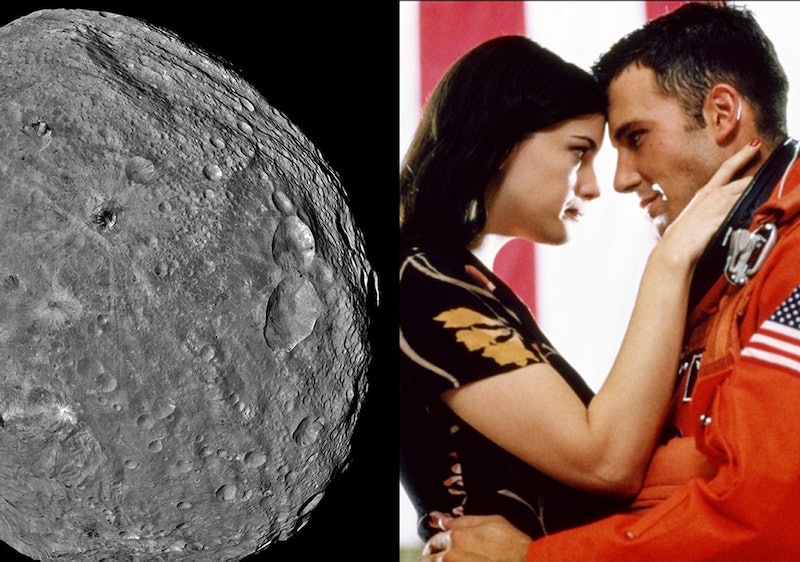 Good day, Earthlings. While we were all going about our business on this casual Tuesday afternoon — you know, chugging that extra afternoon cup of coffee, staring blankly at our overflowing work inboxes at the office, or just giving up and scrolling through our Instagram feeds — a not-so-casual celestial event took place right over our clueless heads (literally). What happened, you ask? Oh, just that a big ol' asteroid whizzed past the earth at around 1:54 p.m. ET on Jan. 29, reportedly reaching speeds of more than 36,775 miles per hour. THAT'S ALL. The giant rock of almost-doom is believed to have missed Earth by about 3.3 million miles, according to The Express — but don't be too comforted by that seemingly large number. As you know, there's a lot of space in outer space, and in relative terms, 3 million miles is considered pretty dang close for an asteroid to be flying in proximity to our dear home planet. And I don't know about you, but it's kind of making me wonder what would happen if an asteroid did hit Earth.

Tuesday afternoon's asteroid — technically known as Asteroid 2013 CW32 — made what NASA refers to as a "near Earth approach." According to the astronomers at NASA’s Jet Propulsion Laboratory, the asteroid could measure from anywhere between about 360 feet up to 820 feet in diameter — making this baby larger than the Great Pyramids, and potentially nearly three times as tall as the Statue of Liberty. Good grief. That's a little large for a call this close, at least for my comfort level.

"Any object this big could be absolutely catastrophic and lethal if it struck the Earth," explained the Express. "According to NASA, asteroids and comets measuring upwards of just 262.5ft (80m) could cause devastation on a 'regional' scale." With those measurements in mind, even if we go with the astronomers' most conservative estimate of asteroid CW32's size, we could have been looking at absolute mayhem here on Earth had it diverged from its course at all in our direction.

So, we may have avoided this catastrophe. But, what if we hadn't? What would have happened if that asteroid had been heading right toward Earth? Would we, the human race, have gone the way of dinosaurs? After all, there is another asteroid on our radar — like NASA's actual radar — called Bennu, that's reportedly anywhere from twice to five times the size of asteroid CW32. What if that one happened to veer toward Earth?

Well, don't worry — unlike the last time Earth suffered a major asteroid impact 65 million years ago, NASA has some plans to make sure any future asteroid-shaped threats stay far away. And... well, it sounds a lot like the plot of 1998's Armageddon (minus Bruce Willis disapproving of a love story between Liv Tyler and Ben Affleck), so remember this any time someone tries to tell you that that film was unrealistic. According to the Sydney Morning Herald, scientists from NASA and the European Space Agency are always devising plans to save the human race from facing impending asteroid-induced doom, and currently, that plan includes blowing up said asteroids.

That's right: Currently, if we find that an asteroid is hurling itself toward the Earth, the plan is to shoot it with a rocket to blow it up. "Our current options, if we do spot a rock headed our way, include firing nuclear-tipped missiles at it," explained the news outlet in an article. "But trying to blow up an asteroid is an unpredictable game, with the possibility of large chunks — now radioactive — scattering and entering the atmosphere, a scenario familiar to anyone who has watched 1998's Deep Impact." (Was 1998 the peak year for space disaster films? Because between Armageddon and Deep Impact, I'm starting to think yes.)

That said, blowing up asteroids might not be our only option for long: Scientists are also developing new options for asteroid protection to avoid Deep Impact-like consequences: There's also a new program called DART (which stands for Double Asteroid Redirect Test) which scientists hope to develop and use to change an asteroid's course rather than blow it up.

According to the Sydney Morning Herald, DART is still in mission testing phase, so if an asteroid happens to be hurtling toward Earth sooner rather than later, DART probably wouldn't be used.

In any case, there's much to celebrate: We've survived the nearby asteroid that passed our humble planet on Tuesday, and humanity has made it this far. Just think of all this as a refreshing mid-week reminder to surrender to the universe and enjoy life, man — cause we're all just a bunch of critters floating around on a big ol' rock in outer space, surrounded by a bunch of other rocks that are flying at super high speeds.