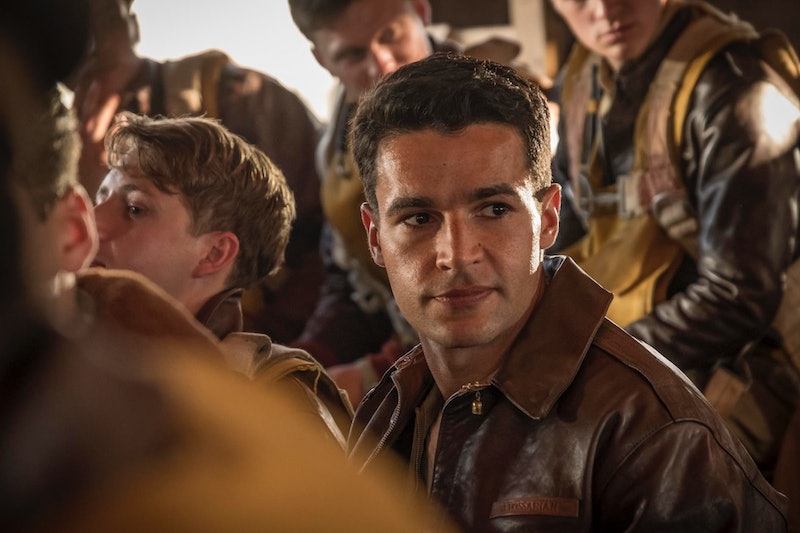 If you didn't encounter it earlier on in life, and it wasn't a set text for your school exams, then this may well be your first run in with the timeless story that is Catch-22. Coming soon to Channel 4, an adaption of Joseph Heller's original 1961 novel, which stars George Clooney, will no doubt be an excellent introduction to the story. But if you're not clued up on all things 22, then you might be wondering what all the commotion's about. So for those who are new here, you're probably wondering: what happens in the original Catch-22 novel?

While Heller's story is all the rage right now, especially now that this high budget adaption of Catch-22 will be landing on Channel 4 at 9 p.m. on Thursday, June 20, according to to TV wise, back in its day, the novel was something of a slow burner. According to the Guardian, when Heller's novel was first published in the 60s, it didn't get many initial sales. But that very quickly changed.

Critics swooned over Heller's acerbic take on World War II, and the rest of the world eventually followed. The story's delivered in fragmented parts, as several characters narrate the conditions of their West Italian squadron base, but Bombardier Yossarian, who's played by Christopher Abbott in the Channel 4 adaptation, is at the novel's core.

Let's be clear: a six-part drama probably won't be able to cover the scope of Heller's 400-something page novel, nor will this article, but you can be assured that this story is a wild ride. Staying true to the novel's title, Yossarian finds himself trapped within a series of inescapable conundrums, while his surrounding troops steadily go insane, as he's eventually led to question whether he'll ever be able to go home at all.

Constantly fighting to stay sane — and alive — Yossarian soon becomes convinced that the military is conspiring to send him to an untimely death. With each new mission he's sent on, he comes up with another creative way to try and get out of it, but, as you can probably guess, each scenario ends up in a... well, catch-22.

Despite it being such a common phrase, many do not know the origin of "catch-22". As Merriam-Webster explains, "The original catch-22 was a governmental loophole involved in Joseph Heller’s satirical novel Catch-22. Heller’s novel follows the exploits of a bombardier in World War II, and in doing so shines a light on the relentless and circular bureaucracy of war and wartime governments. The term is introduced to describe the apparent loophole, or catch, that prevents a pilot from asking for a mental evaluation to determine if he’s fit to fly."

Merriam-Webster then goes on to quote directly from Heller's novel:

"There was only one catch and that was Catch-22, which specified that a concern for one's own safety in the face of dangers that were real and immediate was the process of a rational mind. Orr was crazy and could be grounded. All he had to do was ask; and as soon as he did, he would no longer be crazy and would have to fly more missions. Orr would be crazy to fly more missions and sane if he didn't, but if he was sane, he had to fly them. If he flew them, he was crazy and didn't have to; but if he didn't want to, he was sane and had to. Yossarian was moved very deeply by the absolute simplicity of this clause of Catch-22 and let out a respectful whistle."

The official Merriam-Webster definition of "catch-22" is "a problematic situation for which the only solution is denied by a circumstance inherent in the problem or by a rule," which is a decent but pretty dry summary of what turns out to be a very, very funny novel. Heller does have a wicked sense of humour though, and Catch 22 is probably a bit more enjoyable for readers who like their comedy on the bleaker side.

I reckon Clooney's going to run with that humour in his adaption of Catch-22, but if this six-parter leaves you thirsting for more after the finale, then you should definitely hit up your favourite bookstore and buy a copy of Catch-22, because this novel is a classic that should be on everyone's summer book list this year. Trust me, it's much better when you're not just reading it for your GCSEs.