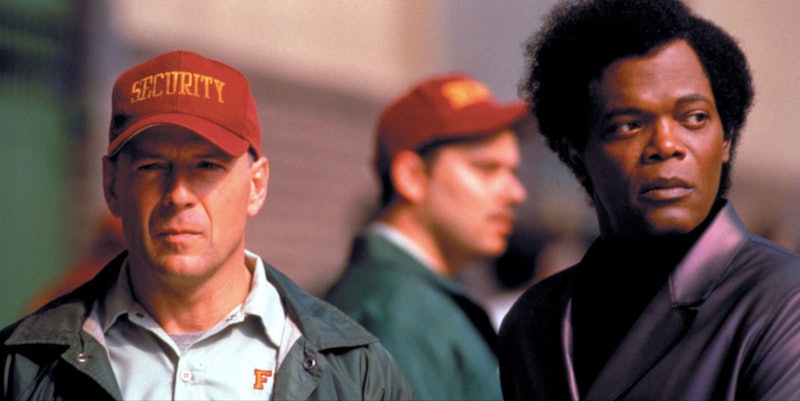 M. Night Shyamalan is back with Glass, the third movie of his Unbreakable superhero trilogy. This one, out Jan. 18, reunites the original cast: Bruce Willis, Samuel L. Jackson, Spencer Treat Clark, and Charlayne Woodard, 18 years after they first shared the screen. 2016's Split was revealed to be a sequel to that movie, in its final moments. And the new release will fully meld the original story with that of James McAvoy's character's multiple personalities. Before you see Glass, you should brush up on what happens in Unbreakable.

In Unbreakable, which came out in 2000, Willis plays a security guard named David, who is unhappy with his life, finding himself in an unhappy marriage and a job that’s far from his dream of playing professional football. But this all changes once he survives a train crash that kills over 100 people. Not only is he the sole survivor, he hasn't even broken a bone. At the victims’ memorial service, David finds a mysterious card that reads, “How many days of your life have you been sick?”

Turns out, the card was from Elijah (Jackson), a comic book art dealer who was born with Type One Osteogenesis Imperfecta, a rare genetic disorder that makes his bones extremely fragile. David decides to check out what the meaning behind the note is, taking his son Joseph (Clark) with him. Elijah then reveals that the reason for asking about prior illnesses and injuries is because he believes that David might be his counterpart. “If there is someone like me in the world, and I’m at one end of the spectrum, couldn’t there be someone else, the opposite of me at the other end?” he asks.

And to Elijah, David has the invincible traits that the superheroes he grew up reading about have, making him an actual, real-life superhero. At first, David has no interest in speaking to Elijah further, saying there’s no way he fits that criteria since he sustained injuries in a car accident many years before. But Elijah is relentless, visiting David at work. That’s when Elijah’s suspicions of David have superpowers are confirmed, as David picks up on a man carrying hidden weapons at a football game.

David asserts to Elijah that he’s just an ordinary guy who has good instincts but begins to secretly test his own strength at home by lifting weights with the encouragement of his son. And Elijah decides to investigate David’s powers further, asking his wife Audrey (Robin Wright) about the car accident, learning that David pretended to be injured in order to quit his football career, knowing his wife wouldn’t be with him if he stuck to becoming a professional athlete. And Elijah lets Audrey know his intentions of helping David realize his potential as a superhero.

David maintains that he can’t be a superhero despite surviving the two accidents because he nearly drowned as a kid. But Elijah reminds him that every superhero has a weakness, and David’s is water. This makes David confront his memories of the car accident and realize that he is actually a superhero because he saved Audrey and remained unscathed. Elijah urges him to “go to where people are,” so he goes to Philadelphia's 30th Street Station, where he begins to sense people’s crimes. He finds out the janitor working broke into a house, killing the dad and holding the children and mom hostage.

David follows the janitor into the house, untying the children. He then attempts to save the mother, but the janitor finds him, pushing him off the room’s balcony onto the pool. He nearly drowns, but is saved by the children. But unfortunately, the mom is killed. Despite this, David manages to be the hero and kill the janitor, making sure the children are safe.

But every M. Night Shyamalan movie needs some sort of twist, right? The big one comes at the end, where Elijah asks David to shake his hand, and David sees Elijah’s past as a terrorist. Elijah reveals that he’s the one who caused the train accident as a way to find David. And it’s now Elijah’s purpose to be the villain in David’s life. But by the time the credits roll, Elijah is institutionalized after David reports him to the police. So Glass will pick up nearly two decades later, and show fans what's happened since they both embraced their aliases: The Overseer and Mr. Glass.