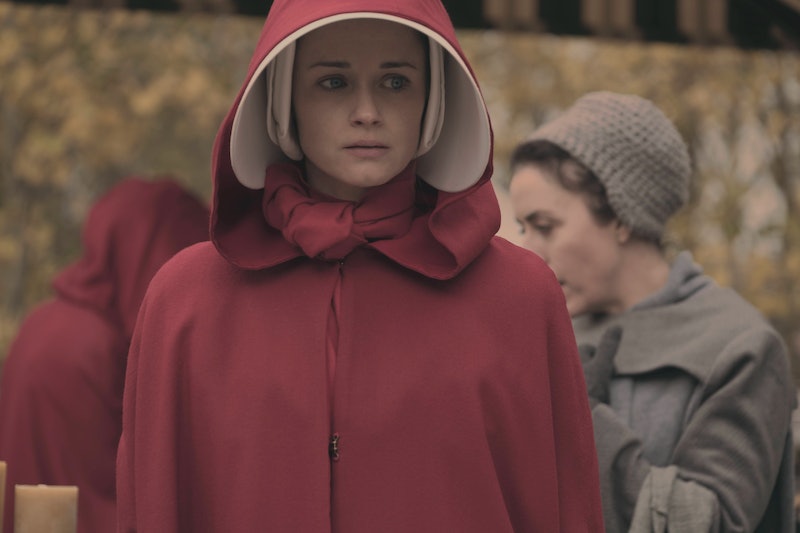 George Kraychyk/Hulu
By Shannon Carlin
May 11, 2017

If you've been wondering what happened to Alexis Bledel's character Ofglen in The Handmaid's Tale, this week's episode "Faithful" finally gives you an answer. Spoilers ahead. Now known as Ofsteven, since she no longer lives at the Glenn home after being caught with another woman, she also no longer exudes the fierceness she once did. She once seemed invincible, but she has experienced the painful punishment that goes with defying this new government. She's had her clitoris removed for being gay, and there's no telling what else they would do if she continued to dismiss them. When Offred (Elisabeth Moss) finally sees in her in the supermarket, hiding in the vegetable aisle, she seems despondent. "I'm fine," being the only real answer she'll give Offred before confirming that the Eyes got her. But as episode 5 continues, it's clear Bledel's character is not willing to go down without a fight. Or, at least a drive.

Ofsteven can no longer be a part of the resistance, since it's too risky for the other women to include her since the Eyes are keeping theirs on her. But that doesn't mean she's powerless. In fact, it means she's free to push the boundaries they have set for her. Later in the episode when the handmaids return to the market, it seems to click with Ofsteven that the worst is now upon her so why should she fear the future? She needs to take back control of her life and her body. To do this she even rescinds the name that has been forced upon her as a way of taking back her own identity. "My name's Emily," she tells Offred as she sweetly grabs her hand, something that is forbidden of the handmaids. "Who are you?'

With that question, Bledel's Emily makes her way to an unattended car and jumps into the driver's seat. She seems as surprised as the other handmaids who are looking on in awe of what she's actually done. For a second, it seems as if she can't believe she's broken the rules so openly, but then she puts the pedal to the metal and for a few brief moments is actually free. She knows this will not end well, which may be why she seems resigned to the fact that she will get caught.

Bledel's character doesn't try to run away, but circles the parking lot. She looks at all the men with their guns ready to take her down and knows there's nowhere else for her to go. But, she's uninterested in hiding. She's been doing that for far too long. So, what is she doing, then? Well, as Offred explains, Ofsteven is driving. Bledel's character is in control, and even if it doesn't last, she's managed to force these men to play the defensive.

When Ofsteven is finally cornered, she still refuses to just give in, and instead backs over one of the Eyes and then runs him over leaving a bloody mess behind. She shows no mercy, knowing they will show the same courtesy to her, but she still seems shocked by what she's done. The handmaid formerly known as Ofsteven gives herself up, only to be dragged off by the men with guns to who knows where. But, it doesn't really matter — this was her call to arms and it resonates with Moss' Offred who feels empowered to join this resistance, even if she's not quite sure who they are yet.

Now more than ever, Offred is willing to find out, because she also knows that the only way for things to get better is for more handmaids to get into the driver's seat and show the power they still possess. And this is exactly what she learned from Emily.